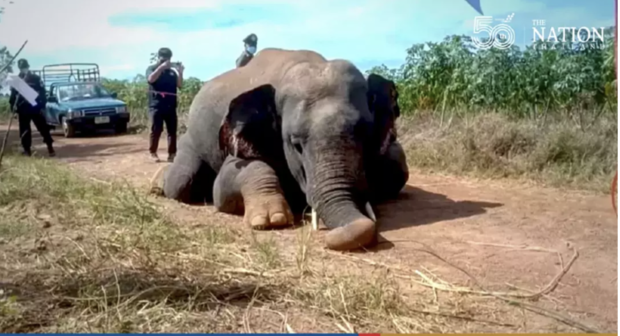 Wildlife rangers on lookout for stray elephants after one electrocuted to death in Prachinburi. The Nation/Asia News Network

BANGKOK — More than 70 elephants were spotted crossing over to Prachinburi from the Khao Ang Rue Nai Wildlife Preserve on Wednesday, while rangers are doing their best to lead the animals back to the sanctuary.

Forest officials told reporters on Saturday that the elephants had left the sanctuary to hunt for food, and that some are still wandering the area.

Officials believe nearly 100 wild elephants have wandered out of the reserve to find food in Prachinburi’s Kabinburi district, which is rich in sugarcane, cassava and banana fields.

One wild elephant, a 10-year-old male, was electrocuted to death on Friday when he tried to pull low-voltage wires with his trunk to enter a cassava field. He had wandered away from his herd.

Another wild elephant was also found with an injury to the nape of his neck.

Rangers are still hunting for stray wild elephants to push them back to the sanctuary for their safety as well as that of local villagers.