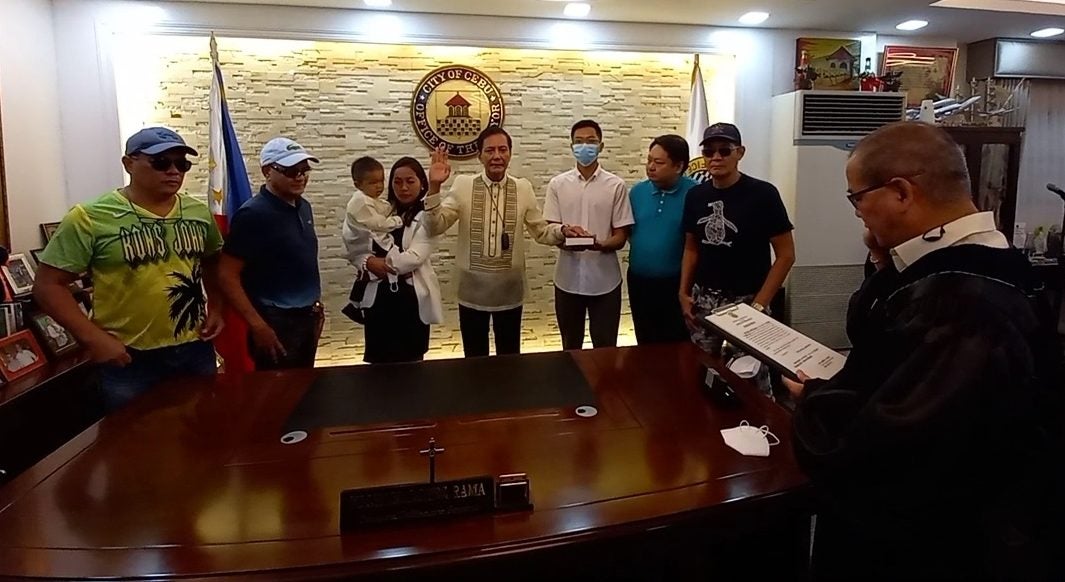 Cebu City Mayor Michael Rama (center) takes his oath before Court of Appeals Justice Gabriel Ingles on Saturday, Nov. 20, 2021. With him were members of his family. (DALE ISRAEL/INQUIRER VISAYAS)

Former basketball star and incumbent Cebu City Councilor Donaldo “Dondon” Hontiveros, who got the most votes among the city councilors in the 2019 elections, also assumed office as the new vice mayor.

Rama said there will be no major changes in his administration as he will continue the programs and projects started by Labella who died on Friday due to septic shock secondary to pneumonia.

Rama, who is seeking the mayoral post in the May 2022 polls, said he was sad about the way he became mayor again.

“This is not the way I wish to take the reign of the city government. (But) this has to happen to me and Dondon in compliance with the law,” Rama said.

Rama’s oath as mayor was officiated by Court of Appeals Justice Gabriel Ingles. Rama then officiated the oath of Hontiveros.

Rama also dismissed comments that he is eager to assume the post a day after the death of Labella.

“It (law) is very clear that when death comes, succession follows otherwise there is hiatus,” he said.

“There is a need to keep the government in motion,” Rama added.

For his part, Hontiveros said he did not expect that he would become vice mayor of Cebu City.

“This is not what we want to happen but of course there is a law that we have to follow. Again, never have I imagined that I will become a vice mayor,” he said.

Hontiveros said he will make himself ready to accept his new post with the help of his colleagues.

“I may not be ready but I have these people around me. I think I would be in the right place,” he said.