As concern aired over armed police in Pangasinan school, lumad teacher asks: What about us? | Inquirer News
Close
menu
search

As concern aired over armed police in Pangasinan school, lumad teacher asks: What about us? 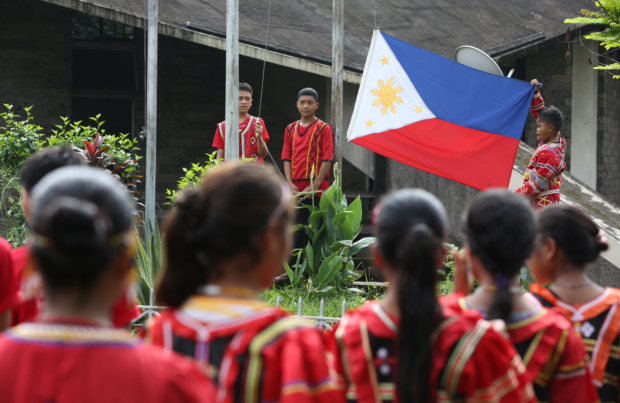 MANILA, Philippines––While the Department of Education (DepEd) was quick in expressing concern over the presence of armed state forces inside a school in Pangasinan province, a lumad teacher commented: “Sana all.”

Last Nov. 15, as heavily armed policemen were seen inside the Longos Elementary School in Alaminos City, the DepEd said armed men are prohibited inside schools in the Philippines.

In its 2019 National Policy Framework on Learners and Schools as Zones of Peace, the DepEd said schools should be free from the presence of armed men, whether from the government or not.

The DepEd said this was to promote the safety of learners and to make certain the continuity of education in conflict-stricken places in the Philippines.

This was why when a policeman with a long firearm was seen inside a school that took part in the initial implementation of limited physical classes, Filipinos online asked: “What was it for?”

Psychologist Ver Reyes (Ph.D) told INQUIRER.net that the presence of armed men inside schools could give rise to distress, especially in the minds of children who see schools as places where they are safe.

She explained that the presence of armed men signifies there is danger: “It now creates psychological distress, especially to those who may not be able to understand what’s happening.”

Reyes said this could even revive the trauma of children who had suffered from violence themselves, calling the image of guns a possible “trigger.”

Hayahay said while she agreed with DepEd that schools should be zones of peace, she hoped it also applied to lumad schools that had been militarized.

She said since the start of President Rodrigo Duterte’s regime in 2016, the lumad, especially children, saw “relentless military attacks” which was met with DepEd silence.

This was shared by ACT Teachers Rep. France Castro, who said there was something “hypocritical” about condemning the presence of armed men in schools but staying “silent when lumad schools were militarized, vilified.”

In 2017 Duterte threatened to bomb lumad schools, saying these were facilities that teach the youth to rebel against the government. “Get out. I’ll bomb you. I’ll include your structures,” he said.

While his words were heavily condemned as “war crime,” the lumad saw a spike in attacks against them, especially on schools which the government said were infiltrated by the New People’s Army (NPA), the armed wing of the Communist Party of the Philippines. 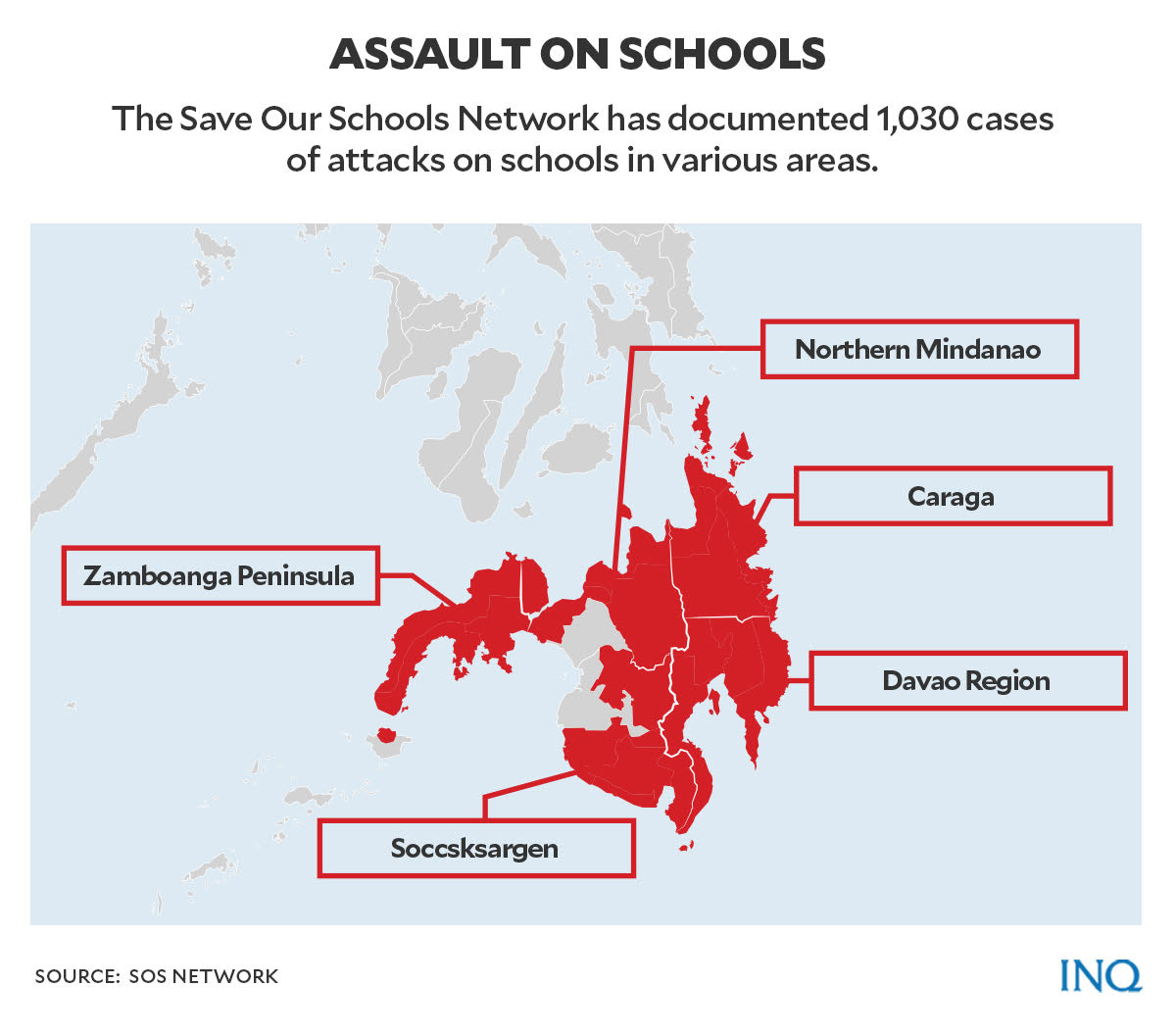 The Save Our Schools Network, since 2016, had documented 1,030 cases of school-related attacks, increasing victims’ count to 93,977 in Zamboanga Peninsula, Northern Mindanao, Davao Region, Soccsksargen and Caraga.

READ: ‘Lumad’ schools and the right to education 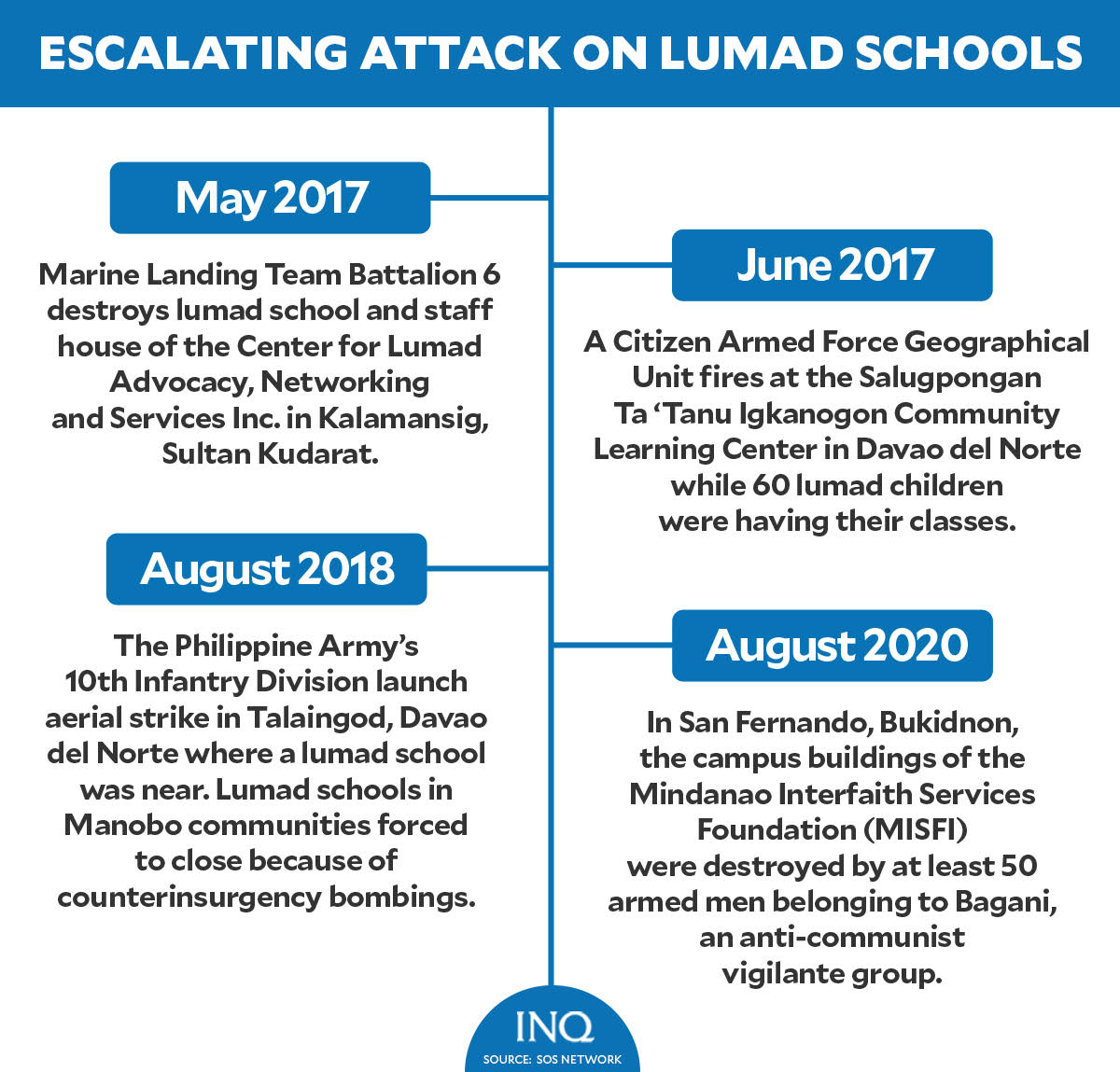 Here’s a look back at the direct and indirect attacks on lumad schools:

The Philippine Army’s 10th Infantry Division launched an aerial strike in Talaingod, Davao del Norte where a lumad school was near. In Daulangan Manobo communities, because of bombings, lumad schools were forced to close.

In San Fernando, Bukidnon, the campus buildings of the Mindanao Interfaith Services Foundation (MISFI) were destroyed by at least 50 armed members of Bagani, an anti-communist vigilante group.

“What makes us different?” Hayahay said about the DepEd’s quickness in calling out the presence of armed police in the Pangasinan school but staying silent in the case of lumad schools. “When it said that schools are zones of peace, it clearly excluded lumad schools,” she said. 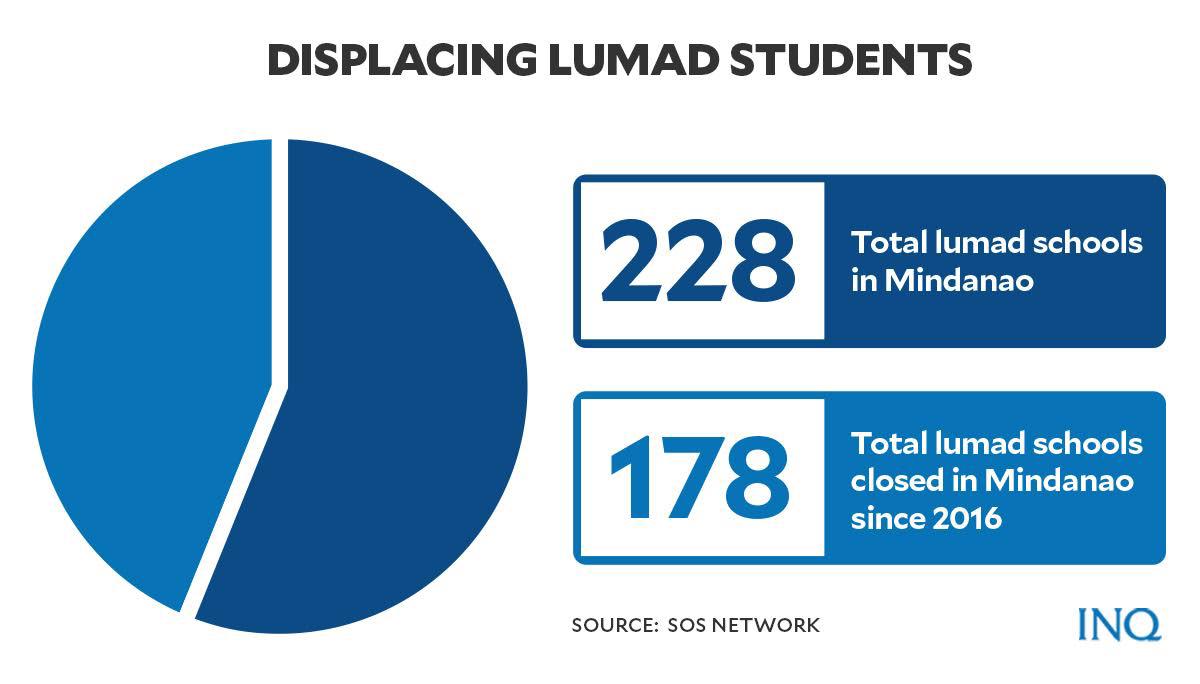 The National Commission for Culture and the Arts defines lumad as a Visayan word which means “native” or “indigenous”. Lumad, however, has been given an entirely different meaning in the counterinsurgency campaign of the government. State security forces often link lumad with insurgency.

The National Commission on Indigenous Peoples (NCIP) issued a resolution denouncing the use of lumad when referring in general to indigenous cultural communities and indigenous people’s groups.

NCIP said lumad was not an indigenous word and its emergence and use were distorted by its use in association with rebels “whose ideologies are not consistent with the cultures, practices and beliefs” of indigenous peoples.

In July 2019, because of a report made by National Security Adviser Hermogenes Esperon Jr., the DepEd’s office in Davao region ordered the closure of 55 lumad schools. 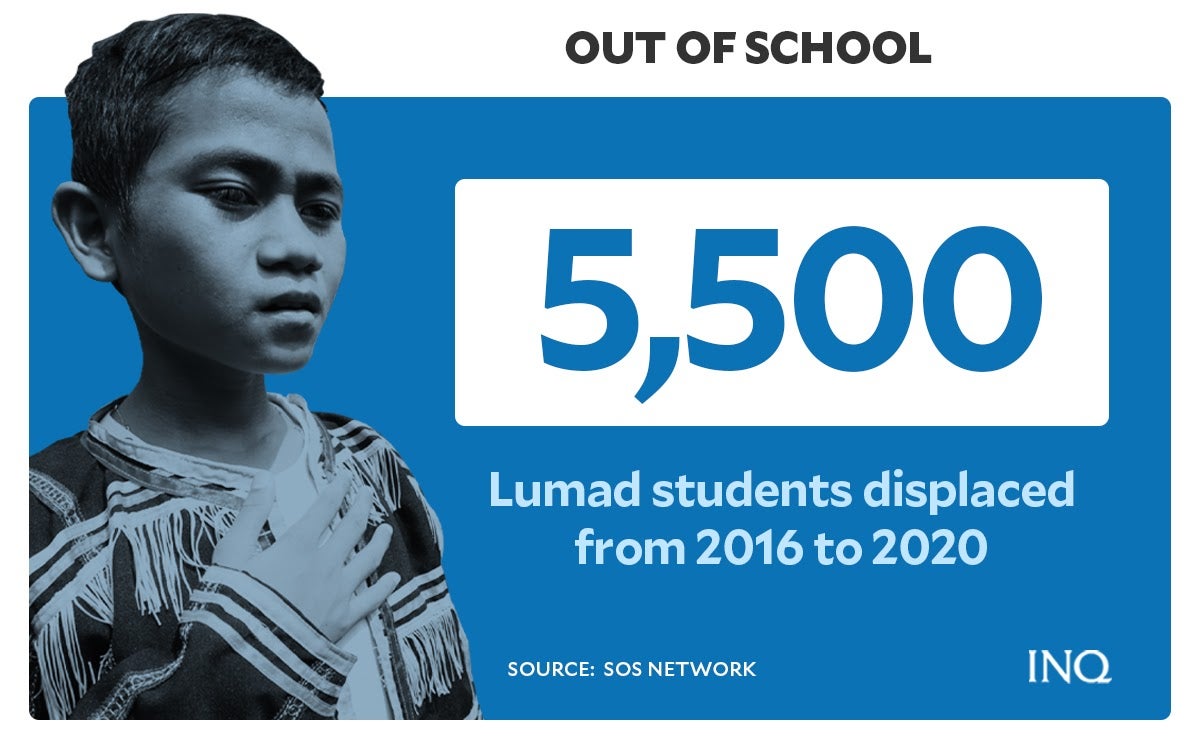 Esperon, who is also vice chair of the National Task Force to End Local Communist Armed Conflict, said the schools serve as an “NPA factory” where lessons include how to dismantle and assemble firearms.

The 55 lumad schools were formally closed in October 2019. The DepEd, however, explained that it was because the schools failed to comply with government requirements.

READ: CHR to DepEd: Closure of lumad schools could be violation of kids’ right to education

Hayahay asked why DepEd was silent when the lumad was fighting against the militarization of schools. She said lumad children have a right to education, which was stated in the United Nations Declaration on the Rights of Indigenous Peoples.

In its National Policy Framework on Learners and Schools as Zones of Peace, the DepEd said the armed conflict continues to pose security threats and “adversely” affects children’s education.

It said the conflict “creates unsafe and unsecure environments where learners face the risk of being victims of grave child rights violations” and exposes them to the risks of “recruitment by armed groups and government forces.”

“These groups may also use schools for propaganda and recruitment purposes. These issues call for strengthening governance of the education system to make schools safer, more secure, and child-friendly,” the DepEd said in its Order No. 032.

But what happens when schools are militarized or closed?

Order No. 032 said schools, as zones of peace, should recognize “at all times, even in situations of armed conflict” these learners’ rights:

• Right to quality, accessible, and appropriate basic education.
•
• Right to be consulted and to participate in all matters affecting them whenever feasible.

• Right to grow up in an environment free from armed conflict

• Right to be protected from any negative consequences of armed conflict, like physical and psychological effects

• Right to assistance, recovery and rehabilitation from the effects of conflict, to reunite with their families, and receive relief as a priority

INQUIRER.net tried reaching DepEd for comment but has not responded as of posting time.