Access to site of Ampatuan massacre eased for rites 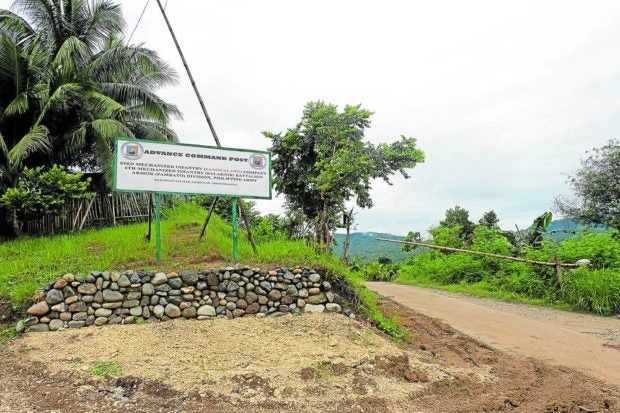 A military outpost was set up in Barangay Salman, Ampatuan Maguindanao to restrict unauthorized entry to the massacre site in Sitio Masalay. MindaNews photo by BONG S. SARMIENTO

GENERAL SANTOS CITY, South Cotabato, Philippines — Restrictions at the site of the mass murder of 58 people, 32 of them media workers, in Maguindanao province will be eased for the commemoration of the 12th anniversary of the Ampatuan massacre on Nov. 23, a local official said.

“Visit to the site is now allowed, just follow health and security protocols. Wear a face mask and sign in a logbook before entry,” she told the Inquirer in a text message in Filipino.

The site, according to Biruar, will be open to visitors from 9 a.m. to 4 p.m.

She said visitors, before proceeding to the massacre site, should register at an outpost that would be established and manned by a Barangay Peace Action Team along the road.

Local officials established an advance command post where a bamboo pole barricade was mounted to restrict unauthorized entry. The massacre site has been restricted to visitors in the past several months due to sightings of armed men in the area.

Apart from a military command post, another Army unit has been deployed near the massacre site.

Just like last year, families of the slain media workers will forego the traditional visit to the massacre site this year due to the COVID-19 pandemic.

In a joint statement, Emily Lopez and Grace Morales, chair and secretary general, respectively, of the Justice Now Movement, said they agreed not to hold the commemoration at the massacre site this year due to the health crisis.

Instead, the anniversary rites will be held in General Santos City on Nov. 20 in partnership with the National Union of Journalists of the Philippines and Freedom for Media, Freedom for All Coalition, Lopez and Morales said.

Lopez and Morales have warned against people introducing themselves as media practitioners who are allegedly soliciting money to support the commemoration activity this year.

The Ampatuan massacre was the worst election-related violence in the country and the single deadliest attack on the working press in the world.

Several members of the Ampatuan clan were accused of masterminding the carnage, among them the clan patriarch, former Maguindanao Gov. Andal Ampatuan Sr., who died in prison in 2015 due to illness; and siblings Zaldy Ampatuan, former governor of the defunct Autonomous Region in Muslim Mindanao; Andal “Datu Unsay” Ampatuan Jr., former mayor of Datu Unsay town; and Anwar Ampatuan, former mayor of Shariff Aguak town.

Then Buluan Vice Mayor Esmael Mangudadatu sent his wife Bai Genalyn Mangudadatu to file his certificate of candidacy for governor, challenging the reign of the Ampatuans.

Genalyn’s convoy, which included media workers who were covering the event, were flagged down and herded to Sitio Masalay where they were killed. Several civilians who were in the area that time were among those slain. The perpetrators tried to hide the grisly crime by burying the victims in freshly dug graves, which were discovered through an aerial inspection of the area.

Mangudadatu said his family would hold a commemoration activity at the massacre site on Nov 23.

In December 2019, Judge Jocelyn Solis-Reyes of the Regional Trial Court Branch 221 in Quezon City found some of the accused Ampatuans and several others guilty beyond reasonable doubt for the 2009 crime.