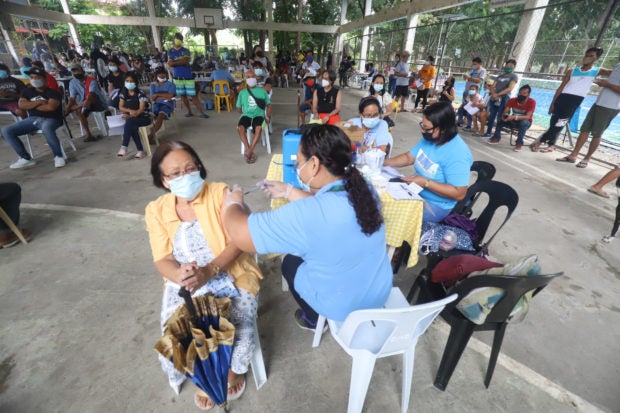 ROLLOUT The Iloilo City government has been ramping up its vaccination drive to cover the remaining 20 percent of its target population. —PHOTO COURTESY OF ILOILO CITY MAYOR’S OFFICE

ILOILO CITY, Iloilo, Philippines — This regional center of Western Visayas is nearing its COVID-19 vaccination target, making its coverage among the highest rates outside of Metro Manila.

Iloilo City has inoculated 268,949, or 80.24 percent of its target 335,172 residents, as of Nov. 14, local government records showed. This excludes around 55,000 residents of Iloilo province who were inoculated in vaccination sites in the city.

Mayor Jerry Treñas said there was still a need to accelerate the vaccination rollout to achieve herd immunity, or when 70 percent or a large part of the population of an area is immune to a specific disease.

“While we have included some from the province who are working here, we really need to ramp up the vaccination so that we can say we are achieving herd immunity,” Treñas said in a statement.

The local government is targeting to inoculate 525,000 residents and those working in the city. Iloilo City has opened its vaccination sites to nonresidents, especially from Panay Island.

It also donated COVID-19 vaccines to neighboring local governments. The city is also including 50,000 minors in its target coverage.

The Department of Health (DOH) reported 62 new cases in the region on Nov. 16, down from more than 1,000 in previous months.