newsinfo / Nation
Nation
use other vaccines to get more effective results

Astrazeneca recipients urged to get other vaccine brand as booster shot 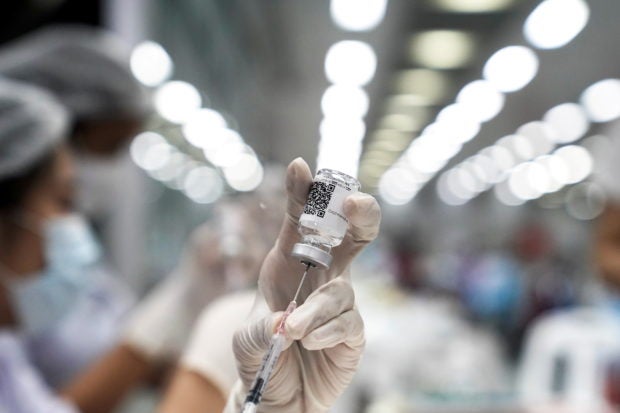 MANILA, Philippines — Individuals who got Astrazeneca’s COVID-19 vaccines and who are now eligible for booster shots, like healthcare workers, were advised by an infectious disease expert to use vaccines from other brands due to a possible drop in efficacy if the same brand is used.

During the Town Hall meeting on COVID-19 boosters hosted by the Department of Health (DOH) on Wednesday, Dr. Edsel Salvana said there is a theoretical risk about such scenarios because pre-formed antibodies might make it impossible for the adenovirus inside the booster shot to transmit its viral material into the cell.

Salvana, who is part of the DOH’s Technical Advisory Group (DOH-TAG), said that there is no safety risk with taking a third Astrazeneca dose, as the concerns lie on whether a third dose would actually be beneficial for those whose primary vaccines were also Astrazeneca.

“The question then becomes efficacy, because if people make antibodies to the ChAdOx carrier — to the Adenovirus carrier — by the third dose, those might be significant and hindi na made-deliver no’ng adenovirus carrier no’ng viral material into the cell so that it can induce an immunogenic (response),” he added.

“[…] by the third dose, those might be significant and the adenovirus carrier may no longer be able to deliver the viral material into the cell so that it can induce an immunogenic response.”

Astrazeneca vaccines are made using a vector system, or viruses like adenovirus which are unable to reproduce inside the human body.  The adenoviruses carry spike proteins instead, similar to the coronavirus, which helps cells recognize the dreaded disease.

A human body fully inoculated with Astrazeneca already has pre-formed antibodies to prevent severe COVID-19 infections.  But what happens when a person gets the third dose, according to Salvana’s explanation, is that the same antibodies may also prevent the viral contents inside the booster shots from taking effect, and possibly decrease the effectiveness of the vaccines.

Hence, Salvana suggests that if there are other options, people must take other brands instead — and this may go for other vector-based vaccines like Johnson and Johnson’s Janssen vaccine, and Gamaleya’s Sputnik V vaccine.

“It’s a theoretical possibility of decreased efficacy — in which case kung gano’n, kung may choices ka naman, and it’s not a safety issue, it’s probably better to pick something else.  This may also hold true, again theoretical, with the other adenovirus vaccines like Jassen and Gamaleya,” Salvana said.

(It’s a theoretical possibility of decreased efficacy — in which case, if that is true, if you have other choices and it’s not a safety issue, it’s probably better to pick something else.)

“In fact ‘yong Gamaleya nga magkaiba ‘yong ginamit niyang adenovirus for the first and the second dose precisely because takot na takot sila doon sa pre-formed antibodies against the adenovirus.  So there is an efficacy issue, albeit theoretical, but if you have an alternative which you know will be immunogenic, it’s probably better to go with that,” he added.

(In fact, the Gamaleya Center actually used different adenovirus for the first and the second dose precisely because they were really afraid of the preformed antibodies against the adenovirus.  So there is an efficacy issue, albeit theoretical, but if you have an alternative that you know will be immunogenic, it’s probably better to go with that.)

During the start of the program, DOH Undersecretary Maria Rosario Vergeire also said that the Food and Drug Administration (FDA) emergency use authorization (EUA) explicitly states that those who got Astrazeneca vaccines are recommended to get boosters from different brands.

“Based on the Food and Drug Administration emergency use authority, vector-based vaccines such as Astrazeneca vaccines are recommended to be boosted by a different vaccine platform due to the theoretical possibility of pre-existing immunity attenuating or weakening the immune response on the second or third dose,” Vergeire said.

Earlier, the government has started providing COVID-19 vaccine booster shots for healthcare workers who were fully immunized over six months ago, due to concerns of waning protection against hospitalization and severe infections.

This means that health workers can get a booster in November if they got their second dose of the COVID-19 vaccine on or before May, or in August for one-dose vaccines.

READ: COVID booster jabs may only be given 6 mos after 2-dose vax, 3 mos after 1-dose vax