P2.3M worth of shabu seized from Taguig resident 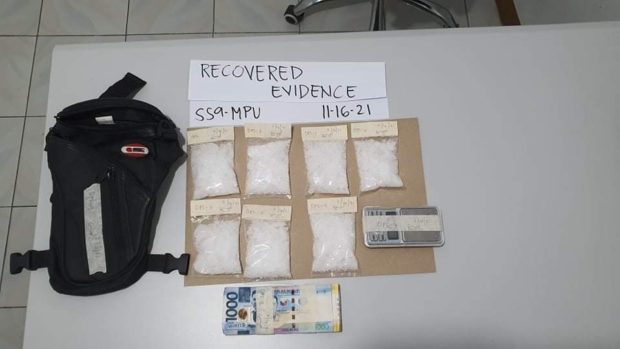 Recovered sachets of shabu from an operation in Taguig were put on display by police operatives. Image from SPD

MANILA, Philippines — Around 350 grams of shabu or crystal meth were seized by local police from an alleged drug pusher in Taguig City, the Southern Police District (SPD) said on Wednesday.

Reports from SPD showed that personnel from Taguig’s Sub-station 9, the Mobile Patrol Unit, and the Taguig Peace and Order Unit were conducting patrols along Maguindanao Avenue of New Lower Bicutan on Tuesday night when they chanced upon a person who was supposedly selling illegal drugs.

The suspect was identified as a certain Omie Salik, a Taguig resident too, while the buyer managed to escaped and is currently at large.

Police estimated the street value of the illegal drugs to be worth P2.380 million. Aside from the illegal substances, Taguig officers were also able to recover a weighing scale, money worth P5,000, and a black sling bag.

SPD Director Brig. Gen. Jimili Macaraeg said that the successful arrest of the suspect is a signal for them to continue their nighttime patrols under Oplan Galugad, to ensure the community’s safety.

(We would continue to do operations against illegal drugs within our jurisdiction, and our nighttime patrols are one way for us to arrest people intending to propagate crimes and disturb the peace and order within our communities.)

Cases for violation of Republic Act No. 9165 or the Comprehensive Dangerous Drugs Act of 2002 are expected to be filed against the suspect.

Read Next
COVID booster jabs may only be given 6 mos after 2-dose vax, 3 mos after 1-dose vax
EDITORS' PICK
UK’s Boris Johnson will resign, BBC reports
Unemployment rate up to 6% in May
Geek out at TOYCON 2022 powered by Smart Signature
High inflation: Your P1 is now worth only 87 centavos
High-risk pregnancy: Reducing your risk is in your hands
House energy committee chair Arroyo bats for cheap electricity
MOST READ
Suspect in grisly killing of missing woman in Bulacan arrested
Kim Atienza’s daughter flaunts bikini body in response to critics of her ‘revealing photos’
Number of active COVID-19 cases in PH breaches 11,000
Ex-Defense chief Lorenzana is the new BCDA chair
Don't miss out on the latest news and information.