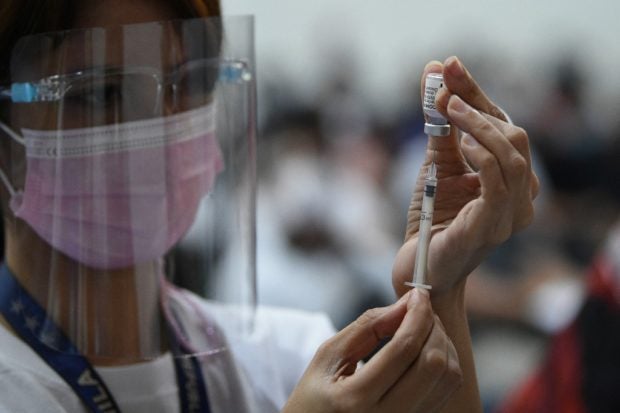 A health worker prepares a dose of the BioNtech Pfizer COVID-19 vaccine during a vaccination drive in Manila. File photo AFP

MANILA, Philippines — Fully vaccinated health-care workers will start receiving a booster shot of the COVID-19 vaccine on Wednesday and they will be followed soon by the elderly and people with comorbidities, according to the Department of Health (DOH) and the National Task Force Against COVID-19 (NTF).

Only three vaccines—produced by Moderna, Pfizer-BioNTech and Sinovac—were approved for what the DOH called as the “heterologous vaccine strategy,” which would allow a jab from any of the approved brands on fully inoculated individuals who may have been first injected with a different brand.

The Food and Drug Administration (FDA) had issued an emergency use authorization (EUA) for these vaccines.

The National Vaccination Operations Center (NVOC) has yet to release its guidelines for the booster campaign, including the period when best to administer the shot, or the elapsed time between the last of their primary shot and the planned booster dose.

“Based on the EUA issued by the FDA, the DOH recommends using either Moderna, Pfizer and Sinovac as booster doses regardless of the brand used for the primary series. Sinovac will also be offered as a booster for those [who] had Sinovac as primary series,” the DOH said late Monday night.

But Health Secretary Francisco Duque III said in a radio interview on Tuesday that a “homologous” strategy would be prioritized as booster shots as there was more certainty in the reactions as this entailed injecting the same type of vaccine.

He also said that the green light for boosters was given by the DOH ahead of the final recommendation from the Strategic Advisory Group of Experts on Immunization (SAGE) of the World Health Organization (WHO), which was held for at least a week.

“So I said, we might not be able to wait for that … we can already start our rollout soon depending on the advice of the [Filipino] All Experts Group,” Duque said.

But the SAGE advice could amend current guidelines on booster vaccination, if needed, he said.

On Monday night, during President Duterte’s weekly televised talk to the nation where officials report on the pandemic, FDA chief Dr. Eric Domingo said the DOH was ready to start giving the “additional dose” to health workers as early as Wednesday.

He said the second priority are individuals “who may fail to mount an adequate response to the primary series” because their immune response is weak—all senior citizens and adults diagnosed with immunocompromised conditions.

The third priority group covers persons age 18 to 60 who have comorbidities that put them at high risk of contracting COVID-19, Domingo said.

Medical front-liners have always been the “first priority” due to their constant exposure to the coronavirus and they have the highest risk of getting COVID-19, Vaccine Expert Panel member Dr. Rontgene Solante said on Tuesday.

He said their immunity was expected to have waned by this time as they were the first to get inoculated in March, when the government rolled out the national vaccination drive.

Studies have shown that antibodies against COVID-19 usually waned after several months.

The government-run hospital National Kidney and Transplant Institute (NKTI) is one of the hospitals where the booster shots will be administered on Wednesday. According to its public information office, around 300 of its staff are expected to receive the jab.

According to the Nov. 15 data from the national vaccination dashboard, 2,612,478 health-care workers and their family members under the expanded A1 group have been fully vaccinated.

A separate Nov. 2 data from NVOC, however, showed that 1.56 million medical front-liners have completed their primary doses, accounting for 95.4 percent of the target population.

WHO has defined boosters as those administered to a vaccinated population that has completed a primary vaccination series of one or two, depending on the brand, and whose immunity and protection have fallen below a rate deemed sufficient in the covered population.

Additional doses may be needed for a target population that needs to “enhance the immune response to a sufficient level of effectiveness against the disease,” WHO said.

“We are expecting seniors and people with comorbidities, let’s see, maybe next week, we can start [giving them boosters],” said Secretary Carlito Galvez Jr., chief implementer of the NTF, following the arrival on Tuesday of 1.35 million more Moderna doses.

He said the NTF is coordinating with the NVOC to achieve the daily inoculation target of 1.5 million doses per day.

On Nov. 11, the Philippines recorded its highest daily jab rate with 1.24 million doses administered nationwide. From Nov. 2 to 16, the country averaged 811,501 jabs per day, according to the NTF.

Galvez said he recommended that health-care workers get vaccinated with “whatever is available.”

Around 1.6 million booster doses of assorted brands are allocated for health-care workers, while some 5 million would be set aside for seniors and people with comorbidities, according to Galvez.

Based on NVOC data, the A1 priority group (health-care workers) population was 1.64 million, seniors or the A2 group numbered 8.25 million and individuals with comorbidities, or the A3 group, were about 9.02 million.

According to the latest vaccination dashboard data, 4.99 million seniors and 7.81 million people with comorbidities have completed their primary vaccination.

As of Nov. 16, some 70.68 million doses have been administered out of the 124.9 million shots that have been procured by the country, including donations and the latest shipment of government-purchased Moderna shots.

Some 16 million more doses are expected to arrive by the end of the month. These would be used mainly for the pediatric inoculation, the three-day vaccination holiday and the booster rollout, according to Galvez.

The country on Tuesday registered its lowest daily COVID-19 case count in nearly 11 months and the lowest positivity rate since the government started reporting such data.

But the DOH noted that the drop was mainly due to the “regular low testing output coming from the weekend.” Also, six laboratories were not able to submit reports on time.

The country also had a record-low positivity rate yesterday of 3.2 percent after 900 were found infected with the coronavirus out of the 28,128 tested. The previous low was 3.9 percent recorded on Dec. 9.

The government first included positivity rates, or the proportion of those infected among those tested, in its case bulletin on Oct. 26 last year.

The number of active cases, or those currently infected with the virus, fell to 25,464 from Monday’s 27,025. Of the total, 59 percent had mild symptoms.