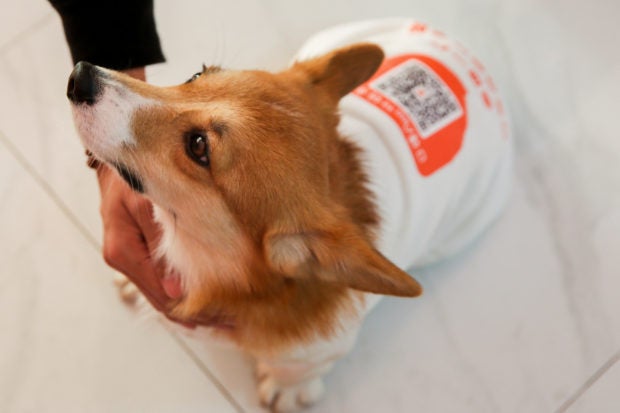 BEIJING — Video of Chinese health workers killing a pet dog with a crowbar after its owners were sent into Covid quarantine has sparked outrage, with social media users voicing concern about the extremes local authorities will go to enforce Beijing’s zero-case strategy.
The owners had been ordered to isolate themselves in a hotel after a Covid case was discovered in their apartment compound in Shangrao, Jiangxi province — a typically uncompromising response by authorities desperate to eliminate outbreaks.
The next day, health officials in hazmat suits entered their apartment, and security footage showed one of them hitting the woman’s pet corgi in the head with a crowbar.
“Even if they thought the doggy was a threat or it was carrying the virus, they should at least have given it a test first,” the corgi’s owner, who identified herself only as Ms Fu, told a Shanghai TV station.
The video of the killing, shared last week, prompted a wave of anger against the way authorities have treated animals while enforcing Covid prevention rules.
“If a government that claims to serve the people enforces the law so brutally, can the government still be believed?” one user asked on the Twitter-like Weibo platform.
The local government said in a statement Saturday that it had apologised to the woman for the workers’ “harm-free disposal of the pet dog without adequate prior communication” with the pet owner — referring to getting rid of biohazardous waste through methods including cremation and burial.
Officials had said they would enter the woman’s home to disinfect it and had promised not to hurt the dog, according to screenshots of a now-deleted Weibo post shared by an acquaintance of the owner.
The Shangrao workers have been “reprimanded and educated”, and removed from their posts, the local government said.

No mercy shown to pets

State-run broadcaster CCTV weighed in on Monday, urging people “not to treat others’ pets as livestock” and calling for more humane and flexible treatment of pets during mandatory quarantines.
China has squashed domestic Covid-19 cases down to a trickle through aggressive lockdowns and mass testing, with local governments often showing no mercy to pets left behind by quarantined owners.
Three cats belonging to a Covid-19 patient in northeastern China’s Heilongjiang province were euthanised after testing positive for the virus in September, local media reported.
Dog ownership was denounced as bourgeois by Communist China’s founder Mao Zedong, but the country’s population of pampered companion animals has ballooned in recent years.
Authorities in some major cities such as Beijing and Shanghai have been forced to make special concessions for pet owners during Covid-19 lockdowns.
ADVERTISEMENT
FEATURED STORIES
NEWSINFO
‘Threat to press freedom’; ‘no it’s valid,’ Hontiveros, Revilla differ views on Rappler shutdown
NEWSINFO
Solo parents get P1,000 monthly, more perks under new law
NEWSINFO
SC temporarily stops Guanzon from assuming post in Congress