Ecuador to use military, mediation to end prison violence 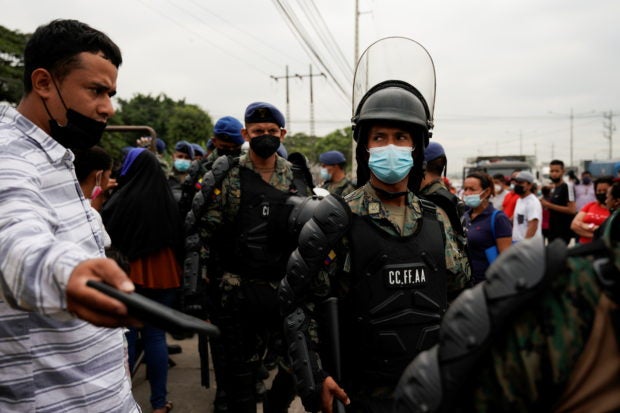 Soldiers stand guard outside the Penitenciaria del Litoral prison where prisoners were killed and injured during a riot, in Guayaquil, Ecuador November 15, 2021. REUTERS

QUITO — Ecuador’s President Guillermo Lasso on Monday announced a plan to pacify prisons including with involvement of the military, as part of steps to tackle a wave of violence which has left scores of prisoners dead.

Fighting between criminal groups in the Penitenciaria del Litoral prison over the weekend killed up to 68 prisoners and injured 25, according to the government.

At the end of September 119 inmates were killed at the prison in the city of Guayaquil during the worst incident of prison violence in the country’s recent history.

Steps to pacify the prisons were agreed with a wide range of officials, Lasso said, describing the violence as one of the biggest crises the country has faced in decades.

Ecuador faces “a serious external threat from attack of drug-trafficking mafias, the same ones that intend to take control of the detention centers and take away our peace of mind,” Lasso said during a press conference in Guayaquil.

Allies including the United States and Colombia will help Ecuador in the fight against drug trafficking, Lasso later said in a broadcast message.

Efforts to mediate with the gangs will take place, though without making concessions to leaders to secure peace within prisons, the president said.

Military personnel will also participate in security controls inside and outside of the prisons, Lasso added.

The president appointed General Orlando Fabian Fuel as the chief of Ecuador’s armed forces late on Sunday. He also designated Luis Burbano as the new commander of Ecuador’s army while placing Fausto Cobo, head of the country’s intelligence services, in charge of the SNAI prison authority.