With Cuban dissidents wary or in jail, call for fresh protests falls flat 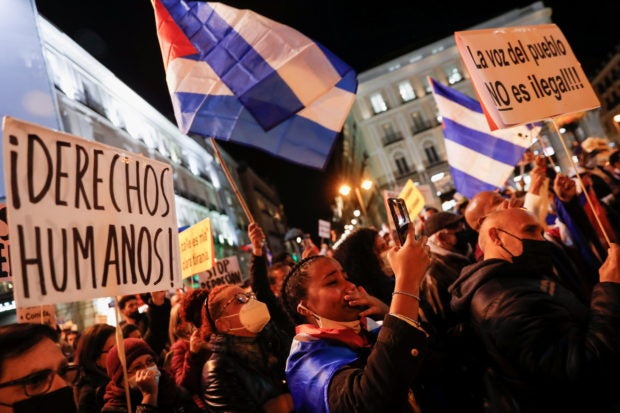 HAVANA — A rallying cry for protests in Cuba in favor of greater civil rights fell flat on Monday as most Cuban dissidents stayed home in the face of government pressure, appearing to end a standoff on the same day the Caribbean island reopened its borders to tourists.

Dissidents have for months called on social media for a “Civic March for Change” following street protests in July, the largest on the island in decades. Hundreds remain in jail following those rallies, according to rights groups.

Cuba’s communist government banned Monday’s planned demonstrations, saying they were part of a destabilization campaign by the United States, which maintains a Cold War-era embargo on Cuba. U.S. officials have denied that.

Dissidents on social media called on supporters to launch protests at 3 p.m. (2000 GMT) in 10 cities across Cuba, from the capital Havana to Pinar del Rio and Guantanamo.

More than three hours later, there was little sign of organized protests, though dissidents on social media shared videos of individuals or small groups who were quickly shouted down by pro-government supporters.

In Havana, plain-clothed and uniformed police were visible at gathering points throughout the city. Streets appeared quieter than normal as some parents kept their children home from school.

“I decided to keep my 6-year-old home from his first day at school because I was worried that something might happen,” state worker Jennifer Puyol Vendesia said.

Demonstrations planned on Sunday by a Facebook group called Archipielago, which has led the call for protests, also fizzled out.

The timing of the protests – the same day tourism and schools were reopening after pandemic restrictions – touched a nerve with the government, according to Cuban political analyst and former diplomat Carlos Alzugaray. He said protest leaders miscalculated in the timing.

“I think Archipelago chose the wrong day,” Alzugaray told Reuters. “People are concerned about the reopening of the economy and the return to normalcy.”

Officials at Havana’s international airport said they expected incoming flights to more than triple this week, from around 51 to 170, as tourists arrive to enjoy the island’s white sand beaches and warm waters.

Cuba has vaccinated nearly its entire population against the coronavirus with its own domestically developed vaccines and says cases of COVID-19, as well as deaths, have fallen sharply, allowing it to re-open its borders to tourism, officials said.

Eunice Pulles, dressed in a white shirt on a Havana street to show her support for the dissident movement, said she thought most government opponents were too intimidated to answer the protest call.

“There will be no protests because the people are scared that we will be repressed,” she said.

State security and groups of pro-government supporters had staked out the homes of high-profile dissidents, according to rights groups and reports on social media.

Government supporters on Sunday surrounded the home in Havana of Yunior Garcia, a playwright and Archipielago leader. That prevented him from marching alone, as he had planned, to draw support for peaceful demonstrations.

Neither Garcia nor his wife answered their phones on Monday, and fellow dissidents said on social media they had not heard from him by mid-afternoon, just prior to the start time of the protests.

On Monday morning, Saily Gonzalez, another Archipielago leader, posted on Facebook a video that appeared to show government supporters gathering outside her Santa Clara home.

In the video, the group, some dressed in red in support of the government, called her a traitor and warned her against marching. Gonzalez yelled back, telling them she would march despite their threats.

Several others posted videos of similar scenarios at their homes.

The government has not commented on those incidents. It says the protests violate Cuba’s 2019 constitution and has for weeks warned against participation in the protests.

U.S. Secretary of State Antony Blinken on Sunday condemned “intimidation tactics” by Cuba’s government ahead of the planned march and vowed Washington would seek “accountability” for the crackdown.

On Monday, Rodriguez said in a televised statement the Cuban people had opted to sit out the protests, despite U.S. officials goading Cubans “to do something that they do not want to do.”

“One can see on our streets… that none of that has occurred,” Rodriguez said.