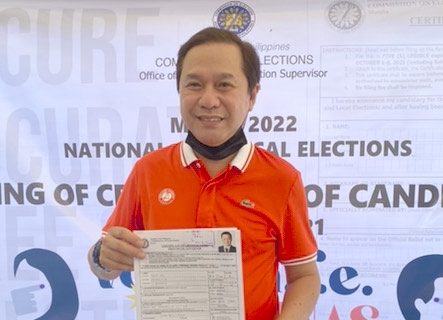 TACLOBAN CITY––Biliran Gov. Rogelio Espina has withdrawn his certificate of candidacy (COC) for a supposed reelection bid on Monday, Nov. 15.

Espina, a doctor by profession, was replaced by his son, Gerard, the mayor of the provincial capital of Naval.

Governor Espina, 60, formally withdrew his COC at the provincial office of the Commission on Elections at 10:51 a.m., accompanied by his anointed successor.

Espina, who served as congressman for the lone district of Biliran for nine years, is supposed to seek a second term in the 2022 elections.

He has yet to give a statement why he decided to withdraw his candidacy for governor.

Multiple sources, however, told the Inquirer he wanted to “retire from politics.”

Gerard, in his 30s, is running for governor unopposed.

The Espinas, who belongs to the Nacionalista Party, has long dominated the political affairs of Biliran, beginning with the election of their father, Gerry, as the lone congressional representative of the province in 1995.