The role of money and COVID in the 2022 poll campaigns 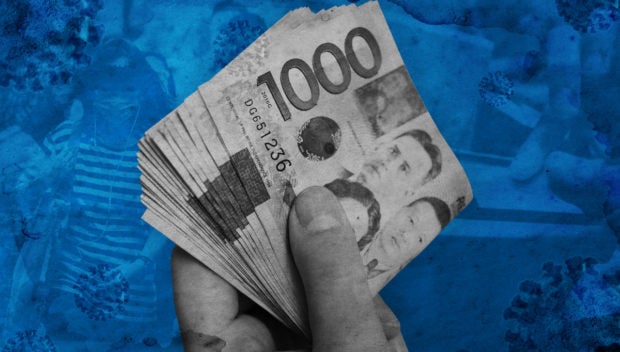 MANILA, Philippines—Have you seen their faces more frequently lately? They’re in television advertisements, on the radio, in social media, in posters, and sometimes, in the flesh—in your neighborhood.

Seeing the faces, names, taglines, and even the chosen campaign colors of political aspirants indicate one thing, the 2022 national and local elections is drawing near.

Some might wonder, however, just how much these aspirants spend every election just to plaster their faces and names everywhere? More so when the COVID-19 pandemic has evidently made an impact on the upcoming elections.

In this article, INQUIRER.net will try to provide details on campaign spending in the Philippines, as well as how the ongoing pandemic has affected the playing field for politicians aspiring for the most coveted positions in the land.

Amid social media posts, TV ads, and caravans, election watchdog Kontra Daya urged the Commission on Elections (Comelec) to take action against premature campaigning among aspirants who have been already making their presence felt prior to the start of the campaign period.

Kontra Daya convenor and University of the Philippines (UP) professor Danilo Arao said the Comelec should call out aspirants who have been using government programs to boost their chances.

“Although it is not ground for disqualification, [the aspirants] should be called out because they are making a mockery of the process,” he said.

“Comelec should step up and not be confined to legal technicalities on premature campaigning,” Arao said. The poll body, he added, “should not hesitate to publicly call out and warn those who engage in de facto campaigning as early as now.”

The campaign period for local positions—House of Representatives, regional, provincial, city, and municipal officials—will start on March 25, 2022 until May 7, 2022.

However, according to Comelec Commissioner Rowena Guanzon, the poll body cannot sanction yet aspirants who will engage in premature campaigning.

“No prohibitions yet for those who filed COC (certificate of candidacy),” Guanzon said in a Tweet posted last Oct. 2.

She said this was in accordance with Republic Act 9369.

“Provided, that, unlawful acts or omissions applicable to a candidate shall take effect only upon the start of the aforesaid campaign period.”

“Provided, finally, that any person holding a public appointive office or position, including active members of the armed forces, and officers and employees in government-owned or -controlled corporations, shall be considered ipso facto resigned from his/her office and must vacate the same at the start of the day of the filing of his/her certificate of candidacy.”

Still, the Comelec discouraged aspirants from engaging in early campaigning, as it could be “considered as premature campaigning,” according to Comelec spokesperson James Jimenez.

“We all know that it is premature since the campaign period has not yet started,” Jimenez said in a television interview.

He previously explained that the Comelec will monitor the aspirants, but can only call out and regulate their actions at the start of the campaign period.

“Though there’s not really a whole lot we can do with it, we know how much they’re spending,” he said.

Candidates without support from any political party, or those running as independent, may spend up to P5 per voter, the law says.

Political parties could spend P5 for every registered voter. 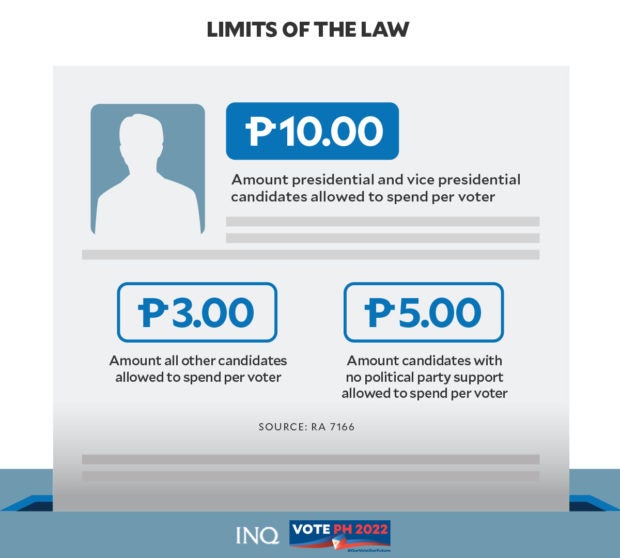 “Any provision of law to the contrary notwithstanding, any contribution in cash or in-kind to any candidate or political party or coalition of parties for campaign purposes, duly reported to the commission, shall not be subject to the payment of any gift tax,” the law said.

According to statements of contributions and expenditures (SOCE), reported by Philippine Center for Investigative Journalism (PCIJ) and which candidates are required to submit to the Comelec at the end of their campaigns, candidates for top positions in the 2016 elections had these expenses. 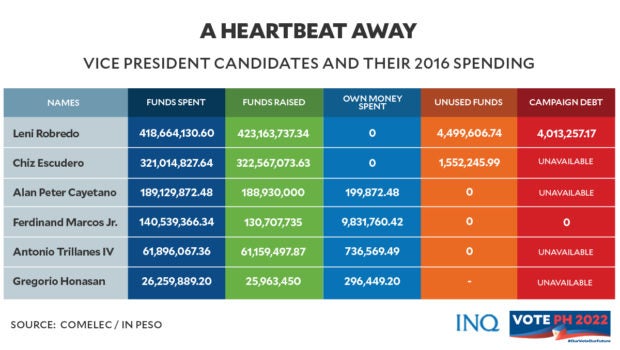 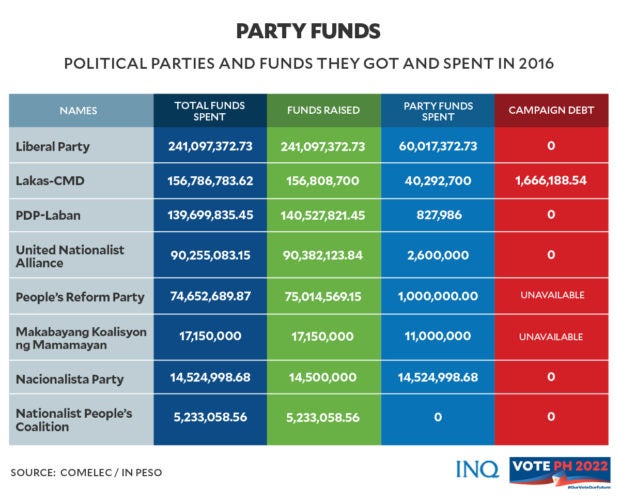 According to data from the Comelec, there were a total of 54,363,844 registered voters in the country in 2016. However, the voter turnout was 81.95 percent, which meant that around 44,549,848 actually voted during the elections that year.

President Rodrigo Duterte’s campaign expense report for the 2016 elections showed that from the P375,009,474.90 he received, over P298 million was in cash while the rest was in kind—like tables, chairs, lights, sound systems, campaign posters, and vehicles for his motorcades.

Where did these donations come from? A separate report by PCIJ detailed that 89 percent of the money he received for campaign funds came from 13 donors.

Most of the donors were from Davao.

Davao-based businessman Dennis Uy now controls Dito Telecommunity — the country’s third major telecommunications company. Uy is also the chair of F2 Logistics, which was awarded a half-billion-peso contract by Comelec for the 2022 elections.

Based on the vice president’s SOCE, Aquino—who was listed as Kristina Bernadette Cojuangco Aquino—donated a total of P30,830,333.42 to Robredo’s campaign.

Other huge contributors for the vice president’s campaign were:

Her closest rival, Bongbong Marcos, detailed in his SOCE that P130.7 million in cash and in-kind donations were sent to him from various sources for his campaign. His SOCE, which included the list of the campaign fund donors, is currently unavailable.

In June, the House of Representatives—voting 213-6 vote with one abstention—approved on third reading a bill seeking to increase the amount of authorized election campaign expenses of candidates for local and national posts.

House Bill No. 6095 sought to amend provisions of Section 13 of RA 7166, or “An Act Providing for Synchronized National and Local Elections and for Electoral Reforms, Authorizing Appropriations Therefore, and for Other Purposes”.

Under the bill, candidates for president, vice president, and senators will be allowed to spend up to P50 per voter — five times more than the P10 per voter set by RA 7166.

Other candidates will be allowed to spend 10 times higher than currently allowed — or a total of P30 per voter.

Funds for political parties will also be increased under the bill, with P50 per voter for their national candidates and P30 for local candidates.

Campaign contributions, the bill said, would be exempt from donor’s tax.

A separate bill filed in the Senate also seeks to raise the campaign spending of candidates.

However, the bill, according to Sen. Aquilino “Koko” Pimentel III would be “too favorable” for rich candidates.

“I’m worried about the national campaign. Maybe we might have authorized a campaign amount that is unrealistic or too favorable for the moneyed candidates,” said Pimentel.

The COVID pandemic has had a significant impact not only the voter registration process and the filing of the certificate of candidacy (COC) and certificate of nomination and acceptance (CONA) but is also changing campaign methods like never before in Philippine politics.

Among the health safety protocols for the COVID-19 disease is social distancing — something that is not observed during rallies and face-to-face campaigns before the pandemic.

“The May 2022 elections will be an election like no other because we are facing a pandemic, and by May 2022 we will not have achieve herd immunity.  I doubt if even one-half of our voting population would be vaccinated,” said Guanzon in an event last July.

“It is an election like no other because the rules of the game must change, the method of campaign will have to change,” Guanzon said.

“We can’t do face-to-face, I mean you can’t do a big crowd, rally, and so there’s a lot of reliance on social media as a campaign platform which is difficult for Comelec to compute in terms of campaign expenses,” she added.

READ: 2022 elections a ‘game changer’; campaigns to be reliant on social media — Guanzon

The poll body, in February, said that it was planning to ban face-to-face campaigning for the May 2022 elections due to the threat posed by the COVID-19 pandemic.

“Activities, like giving out materials or going out or talking to people face-to-face for campaign purposes — that’s gonna change. Door-to-door campaigns might be prohibited,” Jimenez said.

Bayan Muna Rep. Carlos Zarate, however, said the proposal to suspend the usual campaigning method should be studied by the Comelec as it may only serve the interests of rich candidates and eventually disenfranchise poor contenders.

The poll body then announced that face-to-face campaign activities for the upcoming polls could still be allowed, but with adherence to strict health protocols.

As the COVID-19 pandemic persists, social media might become a key player in the upcoming elections. Several aspirants, as early as this year, have been releasing election-related content on their social media pages.

In July, the poll body said it will consider regulating social media ads as part of the candidates’ campaign expenses.

“There’s a lot of reliance on social media as a campaign platform, which is difficult for Comelec to compute in terms of campaign expenses. We are hoping that experts will be able to help us with that,” said Guanzon.

“We cannot regulate the use of social media [for campaigning]. We don’t have the technology for that. But I think we can compute the expenses if Facebook or Twitter will help,” she continued.