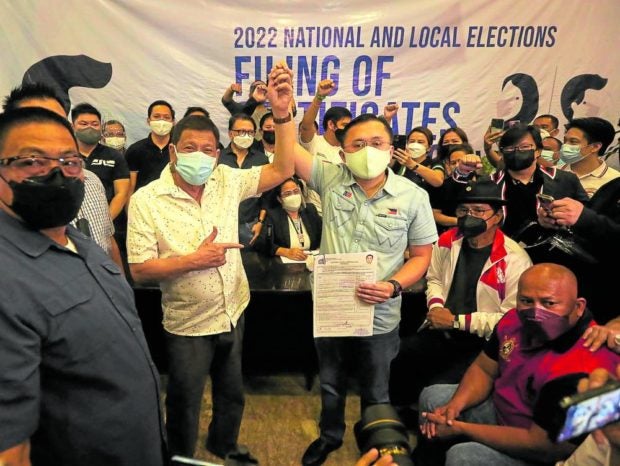 GO FOR PRESIDENT President Duterte raises the arm of Sen. Bong Go after his longtime aide files his substitution papers as the presidential candidate of the Pederalismo ng Dugong Dakilang Samahan in the 2022 polls. Go and Sen. Ronald dela Rosa (right foreground) withdrew as candidates for vice president and president respectively of the Partido Demokratiko Pilipino-Lakas ng Bayan, which no longer has any candidate for those positions. —MARIANNE BERMUDEZ

MANILA, Philippines — President Rodrigo Duterte will not go head-to-head with his daughter Davao City Mayor Sara Duterte-Carpio for the vice presidency in 2022 and will instead seek a Senate seat, presidential aspirant and Duterte’s long-time aide Senator Bong Go said Monday.

(If I were to be asked, I don’t want him to seek the vice presidency. I don’t want there to be any more pain. It is only right that I am the only one hurt. I respect the President so much and his family. I hope he will file for senator.)

“Opo (Yes),” when asked if President Duterte will file his certificate of candidacy for senator on Monday.

Go made the remark less than an hour before the period of filing for candidate substitution ended at 5 p.m. on Monday.

Duterte’s 2022 political plans had the public into a tizzy even before the filing of certificate of candidacy kicked off. Earlier, he said that he has grown tired of politics and would want to retire after his term.

However, he changed his mind when he accepted his party’s nomination for vice presidency, only to balk during the filing of COCs in early October, once more citing his intention to retire from politics.

This prompted the PDP-Laban to field Go as its vice presidential candidate when he was initially eyed to be the party’s standard bearer.

Go then withdrew his vice presidential bid and spired for the presidency under another party, a position he claimed he was not interested in.

A faction of the Duterte’s party PDP-Laban said President Duterte will run under the slate of an allied political party Pederalismo ng Dugong Dakilang Samahan (PDDS), the same party which Go will run under as president.

Matibag said Duterte, along with Go, will run under PDDS due to the unresolved conflict between two factions of the ruling party PDP-Laban.

The Duterte-backed wing is disputing with the faction led by Senators Koko Pimentel and Manny Pacquiao on which of them is the legitimate PDP-Laban.

Sen. Manny Pacquiao, who is seeking the presidency in the 2022 elections, filed his certificate of candidacy for president under the Progressive Movement for the Devolution of Initiatives (Promdi).