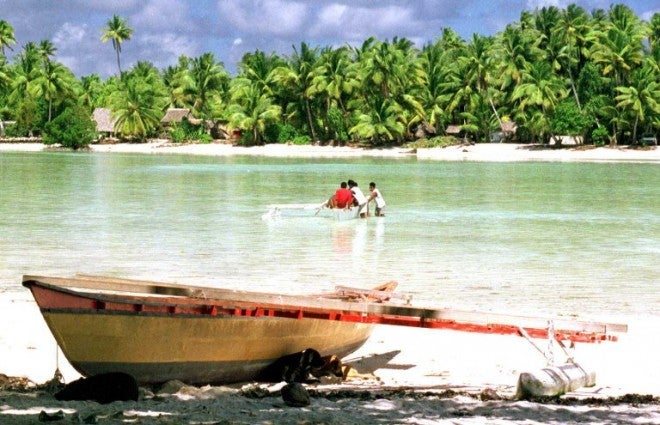 WELLINGTON — The Pacific nation of Kiribati on Monday defended a plan to open one of the world’s largest marine reserves to commercial fishing, labeling suggestions China was behind the move as “neo-colonial”.
READ: China ‘highly appreciates’ Kiribati cutting ties with Taiwan
The proposal would threaten the World Heritage listing of the Phoenix Islands Protected Area, a marine park the size of Greenland that sits about halfway between New Zealand and Hawaii.
Covering more than 408,000 square kilometres (158,000 square miles), the park is home to vast coral reefs and ocean ecosystems that support tuna, turtles, reef fish and sharks.
It was declared a no-catch zone in 2015, barring commercial fishing vessels from operating in the pristine waters.
But the Kiribati government said it planned to lift the ban in order to “sustainably use marine resources”.
“It is abundantly clear that the development policy logic at its inception, however innovative and well-intended, will not be sufficient to meet the present need of the people of Kiribati,” it said in a statement.
Kiribati switched diplomatic allegiance from Taiwan to China in 2019 but this week rejected suggestions from critics that the marine park move was prompted by a desire from Beijing to access lucrative tuna stocks.
“This is extremely misleading, grossly inaccurate and exhibits the usual hypocritical narratives driven by ‘neo-colonial precepts’,” the statement said.
The government said there had been a “marked” decline in demand for fishing rights in Kiribati waters since the park was created, costing up to US$145 million in lost revenue for the nation of 110,000.
It said managed fishing would “achieve significant and tangible wins for our people and for nature”.
Former president Anote Tong, who helped create the marine park, has expressed concern about the government’s plan.
“It’s a huge blow for conservation but I think it’s a much bigger blow to our credibility as a nation,” he told TVNZ.
ADVERTISEMENT
FEATURED STORIES
NEWSINFO
Mango tree owner sought Lolo Narding’s apology and got it thrice–barangay records
NEWSINFO
If elected president, Bongbong Marcos says he won’t make public his SALN
NEWSINFO
OCTA sees rise in new COVID-19 cases outside NCR, C. Luzon, Calabarzon