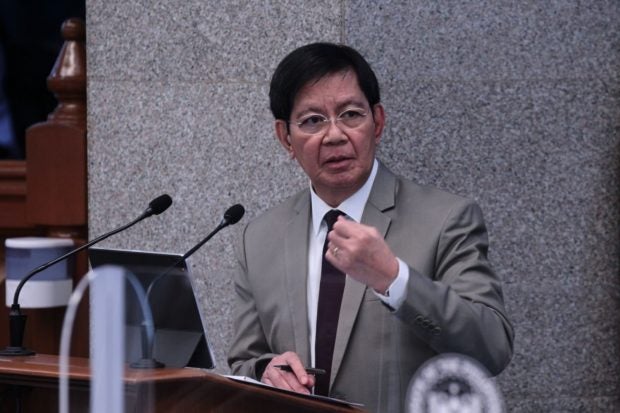 MANILA, Philippines — The assistance program for displaced workers, or known as the TUPAD program by the Department of Labor and Employment (DOLE) , is being “taken advantage of” by some 2022 election aspirants for their benefit, presidential aspirant Senator Panfilo Lacson said on Monday.

Lacson said a number of politicians are requiring some beneficiaries to join the caravans of candidates before they can avail of the assistance package.

“We received reports na ‘yung TUPAD program ng DOLE, these are being taken advantage of by some politicians,” he said in an interview on ABS CBN News Channel.

(They are asking for permission because they said if they don’t deploy some of their constituents, they will not be given assistance.)

Lacson said he encouraged his supporters to just participate in such activities because the program is funded by taxpayers’ money.

(I told them that they should participate since that’s their money. I told mayors to tell their supporters to participate so that they could avail of the TUPAD program.)

“Let them take advantage of these people, of these poor individuals but you know, wala tayong magagawa this is part of the game. So let’s just shrug our shoulders and observe and let’s see what happens next,” he added.

(We can’t do anything about it since it’s part of the game. Let’s just shrug our shoulders and observe and let’s see what happens next.)

The TUPAD program or Tulong Panghanapbuhay sa Ating Disadvantaged/Displaced Workers is an assistance program that gives emergency employment to displaced workers, underemployed and seasonal workers for a minimum period of 10 days, but not to exceed a maximum of 30 days, depending on the nature of work to be carried out.

Lacson said even other assistance programs such as the Assistance to Individuals in Crisis Situation (AICS) from the Department of Social Welfare and Development are also being used by some politicians to their advantage.

“I cannot understand for the life of me why such govt programs will be coursed through some politicians ano, requesting for say permit to hold caravans, or to do caravans in some areas,” he said.