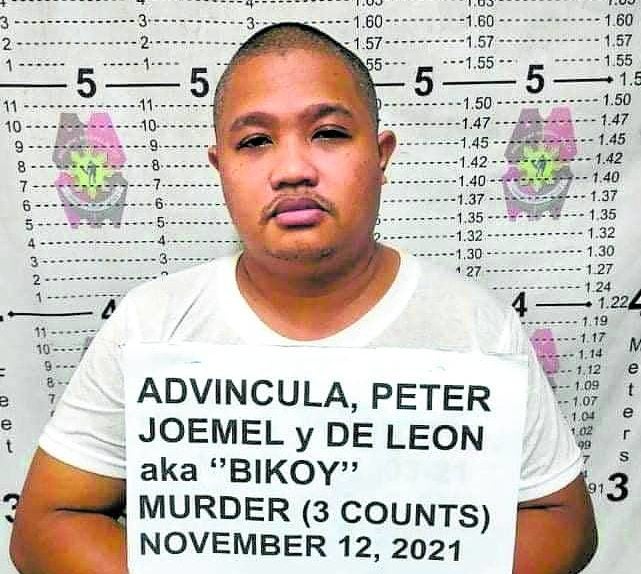 MANILA, Philippines — Daraga police are now looking at the possibility that Peter Joemel Advincula, known as Bikoy for the infamous Ang Totoong Narcolist videos, allegedly killed Sorsogon politicians due to a personal grudge.

Daraga police chief Lt. Col. Bogard Arao said on Monday that it is more likely that if Advincula is responsible for the killings, it might stem from a personal grudge as his loan request from Helen Garay, one of the victims, was supposedly denied.

Garay is a councilor from Sorsogon’s Donsol town, who is running for vice mayor in the 2022 local polls.

(We cannot ascertain a political motive, we cannot also pinpoint a business motive, but what we are looking at is personal grudge.  Because Bikoy has a reputation for having cases for his loans.)

(It appears Bikoy tried to ask for a monetary loan from the victim, and it was not granted.  So maybe he held a grudge against the victim, which may have led to that incident.)

Arao said that the three other individuals — including the survivor who is now a star witness — may have been dragged to the mess only because they allegedly saw Advincula accompanying Garay to the ukay-ukay store (thrift shop) he owns.

The three other individuals, who are also aspirants for the 2022 elections, tagged along with Garay from Sorsogon after Advincula supposedly told the former that local candidates are being asked to set up a coordinating team for a national candidate.

(It appears they were only dragged into the incident because they knew he escorted Garay.  This Helen Garay is friends with the other victims.  Every time she has a trip, they go together.)

The Daraga police chief said that Advincula’s live-in partner is also running in the 2022 elections, but they cannot establish a political motive because the aspirant was seeking the mayoralty, and is not a rival of the victims.

(The live-in partner of Bikoy is running for mayor, not for vice mayor, so they are not political rivals.)

Last Friday, it was reported that Advincula — who accused President Rodrigo Duterte and his family and close allies of involvement in the drug trade — was the main suspect in the death of the three individuals.

Arao also said that it was Advincula who reported the presence of dead bodies inside his thrift shop.  However, it appeared that the suspect did not know that the survivor was already at the headquarters of the Police Regional Office (PRO-5) in Camp Simeon Ola in Legazpi City to file a missing person report.

The local police chief explained that according to the survivor, Advincula invited Garay, who hails from the suspect’s hometown, to a meeting for the supposed setting up of a movement in the area supporting the candidacy of a national election candidate.

Garay then brought along three other candidates with her, but they failed to set a meeting last Wednesday — the day they arrived at Daraga.  On the next day, Advincula fetched them one-by-one, before bringing the politicians to a certain area where the meeting would supposedly be held.

But the fourth politician who survived was already wary of what happened as it was getting dark in the area where she had to wait.  Arao said that the survivor had grown suspicious of Advincula.

According to the survivor’s statements, she tried to ask Advincula where the others are, but the latter gave several answers.  After this, she asked her husband to fetch him, and they immediately went to Camp Ola.