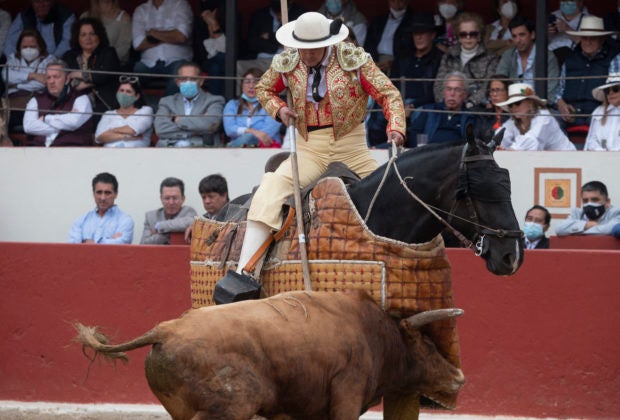 A picador atop a horse spikes a bull during the opening bullfight of the 2021 season at the Esperanza bullring in Pachacamac, Peru, on November 13, 2021. AFP

LIMA — Peru’s bullfights, which are about as popular as soccer in the South American nation, made their much-anticipated return this weekend to the rings of Lima after a lengthy pandemic-induced hiatus.
Spanish bullfighter Juan Ortega and his Peruvian colleague Joaquin Galdos took to the ring at the Plaza La Esperanza in Lurin, a coastal district on the capital’s south side, where the first bullfights since the Covid-19 outbreak in March 2020 were held Saturday.
“Ole, Ole!” the nearly 3,000 spectators shouted at various points throughout the fight.
All major public events were brought to a screeching halt last year in Peru, dealing a bitter blow not only to lovers of the ancient but controversial bullfighting tradition, but to the matadors at the center of the spectacle and the associated showmen and cattle breeders.
Bullfighters’ assistants, costume seamstresses, cattle wranglers and transporters and food vendors were also affected by the lockdown.

Bullfighting in Peru is not for the faint of heart, as the contest ends with the death of the animal.
“What you feel in a (bullfighting) plaza is equivalent to the gladiators in the Roman Colosseum,” 26-year-old matador Galdos told AFP before heading into the ring.
The practice arrived in the Americas with Spanish conquistadors in the 16th century, and to this day the spectacles attract thousands of Peruvians of all social classes. The country has more bull rings than football stadiums.
At Lurin Plaza, with space for 2,9000 spectators, tickets for this event — which will go through next weekend — sell for between $208 and $445. Another series of fights is scheduled here for December 12.
That’s more than the cost to get into a football game — but still, these tickets are in high demand.
“For me, the festival of the bulls is a great passion,” 26-year-old Claudia Crispi, who came to the plaza in Lurin with friends, told AFP.
Over the past year, the pandemic has achieved what animal rights activists have never been able to: bullfighting has been canceled nation-wide, including at Peru’s biggest festival, the Senor de los Milagros.
That particular display has been held in late October at Lima’s Plaza de Acho for the last 255 years, since the Spanish ruled the area. It can accommodate 14,000 people.
Located in the populous Rimac district, near historic central Lima, the Acho is one of the oldest bullfighting arenas in the world. It was built in 1766 and has been the home of the Senor de los Milagros festival since 1946.
During the most difficult periods of the pandemic, the arena served as a homeless shelter for the elderly. It is still closed to bull fights, but its administrator Juan Manuel Roca Rey hopes to reopen in 2022.
“I’m really happy, because (bullfighting) activity is starting up again” in Lurin’s plaza, Roca Rey told AFP, explaining that the Acho needs some renovations: “It’s not in ruins, but it’s not pretty.”
Peru has 199 bull rings, according to official data, much more than its 80 football stadiums.
And ticket-sellers point out that about double the number of Peruvians who pay to watch professional football will attend bull fights.

In addition to the festival at the Acho, there were some 700 fights per year throughout Peru, pre-pandemic.
Some 2,500 bulls were killed in the course of those fights, according to rancher and retired bullfighter Rafael Puga, winner of the 1973 Escapulario de Oro, the Acho’s highest prize.
“Happily, La Esperanza is coming back to fill the void left by the Feria del Senor de los Milagros,” Puga said. “For bullfighters, these two years of pandemic have been very hard.”
The coronavirus hit Peru severely, with some two million cases and 200,000 deaths out of 33 million inhabitants.

But there are other Peruvians who are saddened by the return of the bulls and matadors to the ring: animal rights activists.
“It’s unfortunate that we’re permanently continuing with these traditional practices that are violent, anachronistic, outdated and don’t support anything positive in society,” Rota Oyague, an activist with the collective Anti-Bullfighting Peru, told AFP.
In February 2020, Peru’s Constitutional Court shot down a class-action lawsuit brought by more than 5,000 citizens seeking to outlaw bullfighting and cockfighting, which is also very popular in the country, in an effort to eliminate animal mistreat.
In its ruling, the court said “There is no ‘Universal Declaration of Animal Rights.'”
ADVERTISEMENT
FEATURED STORIES
NEWSINFO
Duterte claims he kicked an undersecretary in the face due to corruption
NEWSINFO
19th Congress to replace ‘Bayanihan’ laws with ‘BBM’ stimulus bill, defer barangay polls
NEWSINFO
Comelec task force endorses report of fishy bank withdrawals to AMLC