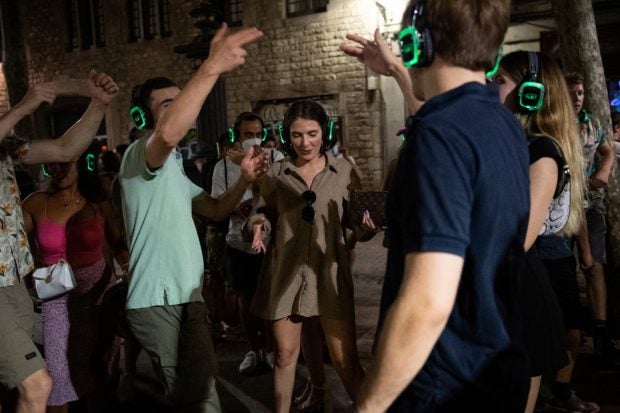 People enjoy a night out in the Born neighborhood of Barcelona early on July 17, 2021 before a curfew came into force. AFP

MADRID — At the Cafe Comercial, one of Madrid’s oldest cafes whose marble columns and ornate chandeliers draw throngs of tourists and locals, bottles of some popular drinks are in short supply.
“It is hard to get deliveries. Certain brands of gin, tequila and whisky are impossible to find,” the manager of the emblematic cafe, Raul Garcia, told AFP.
“The lack of stock affects well-known international brands we never would have thought would one day be unavailable.”
He is not alone.
Due to supply chain issues caused by the pandemic, bars and nightclubs across Spain have struggled to stock their shelves since Covid-19 restrictions on social life were fully lifted last month.
This is raising hackles in a country where social life is concentrated outside of the home, and big groups often meet up for tapas or dinner followed by rounds of drinks.
“The shortage is not generalized, but is concentrated on some brands. The problem is that these are brands people are very attached to,” said Roberto Ucelay, the manager of the Los Olivos Beach Resort in Tenerife, part of Spain’s Canary Islands.
Among the popular names affected are Beefeater gin, Absolut vodka and Patron tequila.

The shortages are due to the global shipping crisis, sparked by an uptick in demand from China and the United States which “affects all international trade”, Spain’s association of spirits makers, Espirituosos Espana, said in a statement.
Suppliers have struggled with shortages in bottles and cardboard boxes needed to package alcohol, as well as a lack of drivers, containers and trucks to ship it.
“It is not a problem of the availability of products, it is a problem of delivery,” said a spokesman for France’s Pernod Ricard, the world’s number-two spirits maker.
Other European nations like Britain have also been hit by alcohol shortages, but in Spain the problem is compounded by the country’s consumption patterns, he said.
Bars and restaurants account for almost half of all alcohol sales in Spain, compared to just one-fifth in France, where supermarkets account for the bulk of sales, the spokesman said.
When business picked up in Spain after virus restrictions were removed, this more complicated supply chain “had to get up and running again” — a process that takes time, he said.

Daniel Mettyear, analyst at London-based alcohol industry consultancy IWSR, agreed, saying Spain’s supply system “is fragmented and involves many players”, which adds to the difficulties.
“Spain is the country in the world with the most bars and restaurants per inhabitant,” he said.
During the months that virus restrictions on social life were in place, bars reduced their orders and liquidated their stocks of alcohol and it will take time to replenish them now that business has picked up, he said.
“They have a long way to go,” he said.
Spain’s association of spirits makers predicts the problem will not last long, but with the busy Christmas holidays fast approaching, businesses are worried.
Ucelay, the manager of the Los Olivos Beach Resort, said he has been told it will take six months to get some brands of champagne.
“That is too long,” he said.
Vicente Pizcueta, spokesman for Noche de Espana, an association which represents the nightclub sector, said the problem will continue “as long as the market is not more fluid”.
“We have a problem with certain brands, not with types of alcohol. Spain is an important spirits maker and has brands that remain available in all categories,” he said. “There are alternatives.”
ADVERTISEMENT
FEATURED STORIES
NEWSINFO
Luis Manzano seeks NBI probe into Flex Fuel investment mess
NEWSINFO
House OKs bill lowering gov’t personnel optional retirement age to 56
NEWSINFO
Ombudsman employee in ‘critical condition’ after being shot
Your subscription could not be saved. Please try again.
Your subscription has been successful.
Read Next
Fire at Indonesia’s Pertamina refinery complex extinguished
EDITORS' PICK
Magnitude 6.1 earthquake rocks New Bataan town in Davao de Oro
House energy committee chair Arroyo bats for cheap electricity
Metro Manila mayors OK single ticketing system in NCR
Omega Speedmaster super racing: Tiny device massive change
Ombudsman employee in ‘critical condition’ after being shot
Smart, TNT roll out SIM Registration touchpoints at SM Supermalls to assist subscribers
MOST READ
Luis Manzano seeks NBI probe into Flex Fuel investment mess
Dina Bonnevie on Alex Gonzaga’s ‘matandang artista’ remark: ‘Hindi ako na-offend’
1,980 pass architecture licensure exam; UST graduate is topnotcher
Ombudsman employee in ‘critical condition’ after being shot
Don't miss out on the latest news and information.