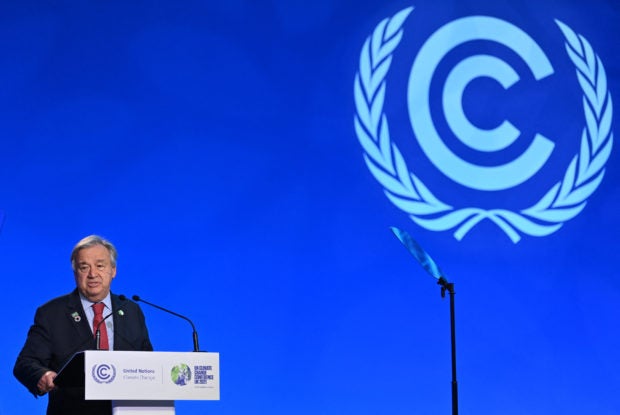 In this file photo taken on November 11, 2021 United Nations (UN) Secretary General Antonio Guterres speaks during an plenary session at the COP26 UN Climate Change Conference in Glasgow.  Guterres said the world was still on the precipice of “catastrophe” after nations reached a global climate deal Saturday that fell short of what science says is needed to contain dangerous warming. (AFP)

And even those who welcomed the deal in Glasgow said a huge amount of work remained to be done.

Guterres acknowledged the shortcomings of the agreement, in a statement following the deal reached on Saturday evening at the Glasgow conference.

“The #COP26 outcome is a compromise, reflecting the interests, contradictions and state of political will in the world today,” he tweeted.

“It’s an important step, but it’s not enough. It’s time to go into emergency mode. The climate battle is the fight of our lives and that fight must be won.”

“Our fragile planet is hanging by a thread”, he warned, adding “We are still knocking on the door of climate catastrophe.”

“But the real work continues outside these halls. And we will never give up, ever.”

During the conference, Thunberg and other activists had denounced the way it was playing out, arguing that world leaders had failed to match their words with real action.

“There is still a huge amount more to do in the coming years,” Johnson said.

“But today’s agreement is a big step forward and, critically, we have the first ever international agreement to phase down coal and a roadmap to limit global warming to 1.5 degrees.”

A European Commission statement said the deal kept the targets of the 2015 Paris climate agreement alive, “giving us a chance of limiting global warming to 1.5 degrees Celsius”.

Commission President Ursula von der Leyen said delegates to the conference made progress on commitments to cut back on dangerous emissions, and on raising 100 billion dollars a year to help developing and vulnerable countries.

“But there will be no time to relax: there is still hard work ahead,” she added.

During the final negotiations, China and India insisted that language on fossil fuels be weakened in the final summit decision text. In recent days, the Australian government has vowed to sell coal for decades to come.

“While the official text might have stopped short of agreeing to phase out coal, the statements made by world leaders in Glasgow leave no doubt that coal is on its way to being consigned to history.”

“I apologise for the way this process has unfolded, said Sharma, as the final deal was clinched. “I am deeply sorry,” he added, before banging down his gavel.