Sara Duterte, Bongbong Marcos talking about ‘working together’ in 2022 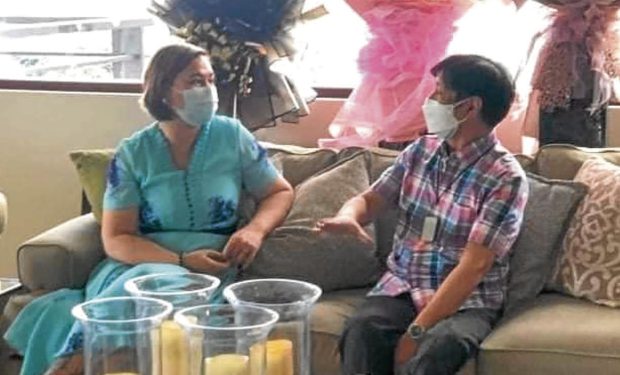 In an online briefing with congressional reporters on Friday, Romualdez, who is also House majority leader, said Lakas-CMD “would obviously want the highest position” for Duterte-Carpio, who joined the party on Thursday.

But Romualdez, a younger cousin of Marcos, remained sketchy on details of the discussion and said developments would likely be announced over the weekend.

Asked if the talks between President Duterte’s daughter and Marcos involved an alliance and not running against each other, Romualdez said: “Basically yes. I’m hoping for that. We’re all hoping for that, that they can work together.”

“I think the discussions between the two have been along those lines. We are thinking very positively about this,” he added.

He said the two politicians also had a chance to talk during the Thursday wedding of a daughter of Sen. Ramon Revilla Jr., the Lakas-CMD chair, in Silang, Cavite.

On that day, Duterte-Carpio announced her resignation from the regional Hugpong ng Pagbabago party, which she founded, joined Lakas-CMD and was inducted after the Revilla wedding.

The move, coming only four days before the deadline for substitution of candidacies on Nov. 15, fueled speculations that she is eyeing a higher national post by running as a substitute candidate for a national party.

Romualdez said there were many factors being considered in Duterte-Carpio’s final decision, such as “alignments, realignments and refinements based on recent developments in the past 24 to 48 hours.”

One of the possibilities, according to Lakas-CMD cochair and Quezon Gov. Danilo Suarez, is a term-sharing agreement between Duterte and Marcos.

But Marcos rejected the idea because a three-year term for president, he said, would not be advantageous for the people.

Another possibility that emerged on Thursday was a Go-Duterte ticket under the Partido Demokratiko Pilipino-Lakas ng Bayan (Cusi wing).

“We continue to monitor the developments in the national political landscape and we are exploring all options as the dominant majority party, including our original plan of fielding a Go-Duterte tandem,” the Cusi wing said in a statement.

The group’s president, Energy Secretary Alfonso Cusi, confirmed that the statement referred to President Duterte, but the Chief Executive had already said he would retire after “overwhelming” public disapproval of his plan to run for vice president.

Another party watching developments was the Nationalist People’s Coalition (NPC), which was still considering whether to support a presidential contender, according to Sorsogon Gov. Francis Escudero.

Escudero, who along with Antique Rep. Loren Legarda is running for a Senate seat under the NPC banner, said the party would likely endorse a presidential candidate, or allow its members to decide, which candidate to endorse. —WITH REPORTS FROM LEILA SALAVERRIA AND DJ YAP