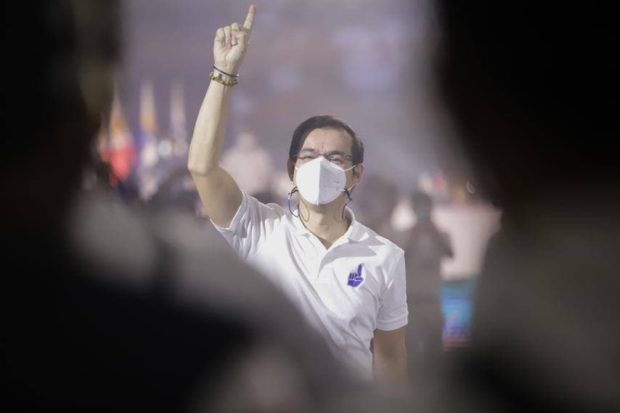 CABUYAO, Laguna — Manila Mayor Francisco “Isko Moreno” Domagoso on Friday said that if elected president, his administration would prioritize investments to ensure the future of the youth.

Moreno said his administration would also invest on information technology infrastructure, particularly on improving internet connectivity for their educational needs.

Likewise, he said a Moreno government will prioritize the teaching of subjects that would make the youth more competitive with those from highly-developed nations.

“We will continue to invest on STEM (science, technology, engineering and mathematics) so that we will be competitive with Singapore and other countries. We will go to that direction,” explained Moreno.

Moreno’s economic agenda of slashing the excise taxes on oil products and electricity and reviving micro, small and medium enterprises are also investments for their future as these would result to  more savings for their parents and provide them with more job opportunities.

Since most fresh graduates get their first jobs in business process outsourcing (BPO) centers, Moreno said investment in human resources development for the transformation from BPO to KPO (knowledge process outsourcing) which gives more income to about three times better pay.

“Pag graduate niyo, we will engage new developments from BPO to KPO. For new graduates, we need to adopt the new skills,” he said.

Moreno said he is confident that he can deliver all these could as he had already accomplished them in Manila.

Having said that, Moreno said the youth should also invest on themselves by pursuing their education with dedication, adding that poverty should also not be a hindrance in their pursuit of education.

When he first entered public service as city councilor at age 23, Moreno then was only a high school graduate. He pursued higher education to polish his knowledge and skill, subsequently earning a degree in Business Administration degree at the International Academy of Management and Economics (IAME).

Moreno continued with his post-graduate studies at the Harvard University under the Executive Education Program and the Strategic Leadership Program at the Oxford University.