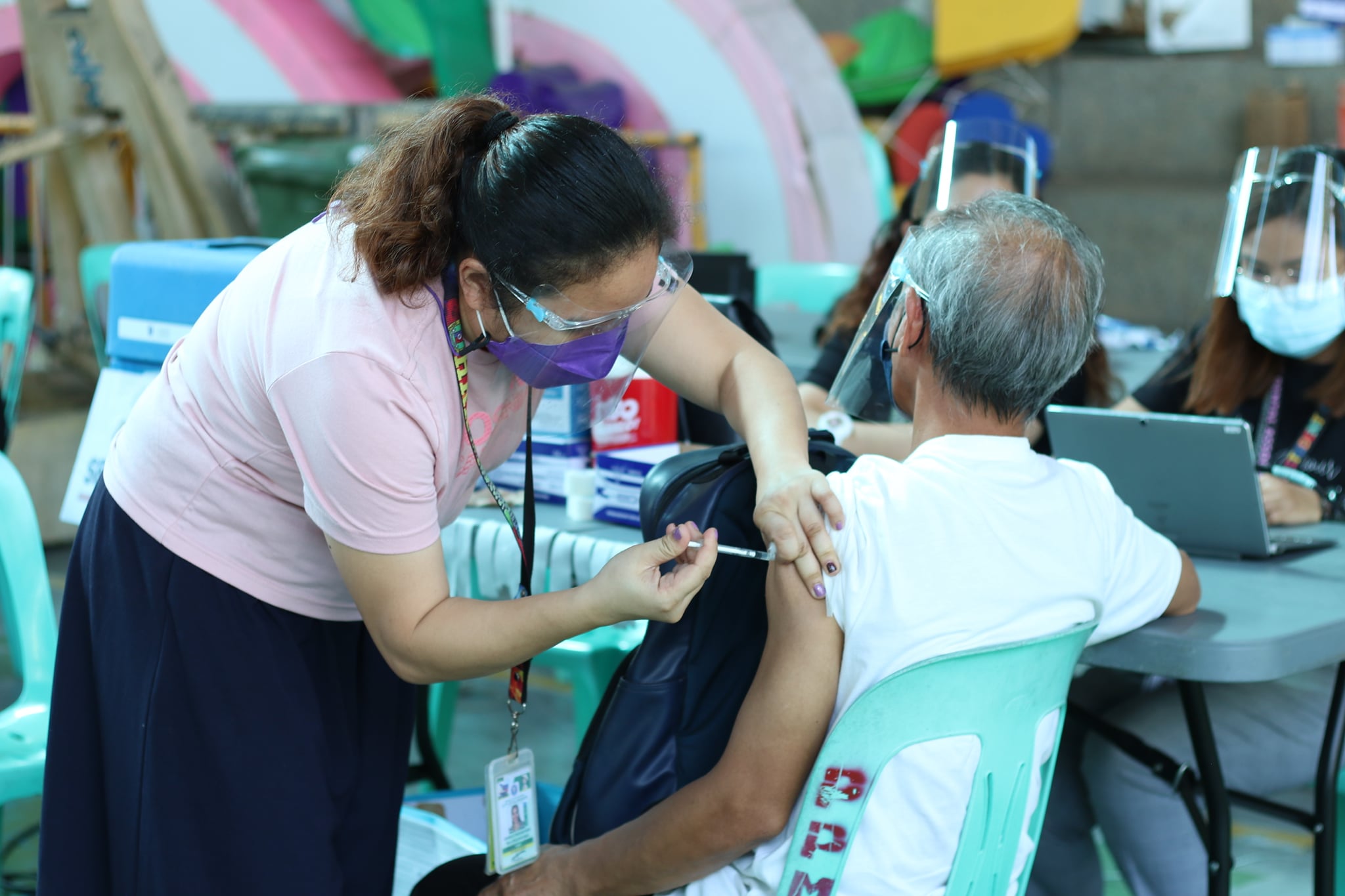 An elderly resident in Olongapo City gets inoculated against COVID-19 as the local government continues its vaccine rollout for the rest of the population. (Photo courtesy of Olongapo City Information Office)

MANILA, Philippines — Malacañang is considering a three-day nonworking holiday from Nov. 29 to Dec. 1—to be designated “National COVID-19 Vaccination Days”—and will mobilize the entire government to ramp up its inoculation drive.

While the vaccination program is successful in the National Capital Region (NCR), the government is still far from its national inoculation target as many regions are still way off their respective goals.

As of Nov. 10, only 30.5 million Filipinos have been fully vaccinated, or 27.66 percent of the country’s more than 110 million population. The government is targeting to inoculate 5 million Filipinos a day during the three-day vaccination drive and bring the total nationwide to 50 million by the end of the year to reach population protection.

At a press briefing on Thursday, presidential spokesperson Harry Roque said President Duterte would soon decide whether to declare Nov. 29 and Dec. 1 as special nonworking holidays. Nov. 30 is Bonifacio Day, a regular holiday.

“The concept [to be applied] here is ‘bayanihan.’ The entire government will be joining, including the local government units (LGUs), Armed Forces, police, medical community and even religious organizations,” he said.

Other health professionals from the public and private sector, such as dentists, pharmacists and medical technologists, would also be deputized to bring up the total to 200,000 vaccinators. Rosario said the government would increase the number of active vaccination sites from the current 8,000 to as many as 11,000.

Each region would be given a target of vaccine recipients, with LGUs coordinating with national government agencies and private sector entities for logistical requirements, she added.

The police, military, coast guard and transportation sector would deploy assets to deliver vaccines and other medical supplies to areas with low vaccination rates and high demand for jabs.

While LGUs could continue their registration activities for vaccine recipients, Rosario said they should administer their allocated shots within the three days by allowing walk-ins to get registered and be inoculated on the spot.

She said four committees made up of government agencies and private sector groups have been formed to prepare for and oversee the vaccination days.

The logistics committee, led by Health Undersecretary Carol Taiño, would ensure that the vaccines reach their destinations.

The data management committee, headed by Undersecretary Manny Caintic of the Department of Information and Communications Technology, would take care of the IT needs, connectivity, encoding and records managements.

A demand-generation and communications committee to be headed by Presidential Communications Operations Office Director Pebbles Duque would spread the word about the vaccination days and encourage people to get vaccinated.

Vaccination in Metro Manila is progressing as more than 10 million residents have now been inoculated, breaching the target to jab of 70 percent of the region’s estimated population of 14 million people.

Trade and Industry Secretary Ramon Lopez warned businesses to continue enforcing minimum health protocols even if vaccination rates were increasing and the number of COVID-19 cases were declining.

Speaking at the televised Laging Handa public briefing, Lopez said all establishments must assign a full-time safety and health officer.

“They won’t do anything but ensure that all people in those establishments, whether customers or workers, obey the minimum public health standards,” he said.

Businesses also have to set up occupation health and safety committees to ensure health protocols were observed in the workplace at all times.

For specific establishments, such as restaurants, requiring all dine-in customers to be vaccinated, Lopez said it was not enough that they should merely be asked if they were vaccinated or not.

“If the customer said ‘I’m vaccinated’ but his vaccination card wasn’t asked to be shown, that is a ground for informing us, the authorities, that this restaurant is not following the requirement. The requirement is to look for the proof of vaccination,” he said.

Lopez said the public could call the Department of Trade and Industry (DTI) hotline 1384 to report establishments not enforcing health protocols so that the DTI could send inspectors and inform local government enforcers.

Sellers and workers in Christmas bazaars, “tiangge” and pop-up stores in the NCR are also required to be fully vaccinated before they can operate during the holidays, according to a recent resolution of Metro Manila mayors.

These stores “are seasonal in nature and their traders, salespersons, exhibitors, organizers and other personnel come from different parts of the country, thereby making contact tracing highly difficult on the part of the concerned (LGU) in the event of COVID-19 exposure or infection,” read the Metropolitan Manila Development Authority (MMDA) Resolution No. 21-27, which was signed on Nov. 8 but made public only on Thursday.

MMDA Chair Benhur Abalos recalled that seasonal stores were identified as significant contributors to the polio outbreak in September 2019 and the recent resolution of Metro Manila mayors could help prevent similar outbreaks. —With a report from Mariejo S. Ramos