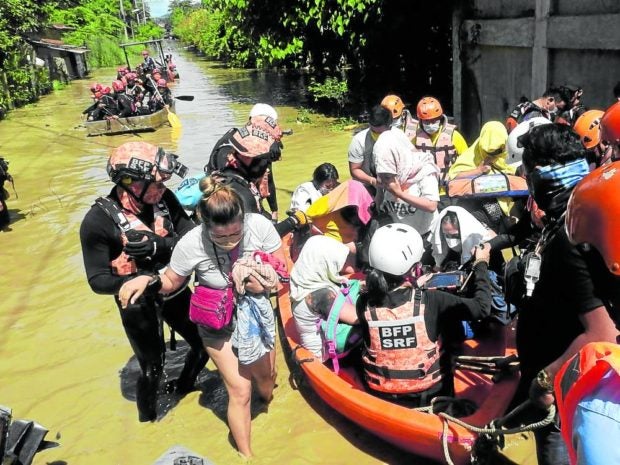 Lawyer Marlisa Gallo, head of the City Social Welfare and Development Office, said the figure was based on the partial list obtained by her office in 13 flood-hit villages on Wednesday.

Some of the affected families did not take shelter in evacuation centers, where most of those displaced took refuge and were able to avail of food assistance distributed by the city government.

“We have given them food so far,” Gallo said, adding that those living in areas with high levels of floodwater were advised to stay in evacuation centers as a precautionary measure instead of returning home.

This developed as the regional office of the Office of Civil Defense lifted all rainfall warnings on Thursday morning after water levels had subsided.

The city government has not provided the figures yet how many of those evacuated have returned home.

Heavy rainfall in the city’s upstream areas had caused the Davao, Lasang and Matina rivers to overflow late on Tuesday, prompting the City Disaster Risk Reduction and Management Office to alert residents along the banks of these rivers to prepare for immediate evacuation.

In some areas, residents had to either leave their homes or stay on their roofs as water levels went up as high as 1.82 meters (6 feet).

Only three houses, however, were reported damaged because of the floods, Gallo said.

Just about two weeks ago, some flood-prone villages were also submerged because of continuous rain brought about by the intertropical convergence zone. The heavy downpour resulted in creeks and other smaller bodies of water to overflow.

The city recorded its worst flooding in June 2011, when 31 people, 20 of them children, died after rampaging water hit five villages in the southern part of the city.

Heavy rain then caused Matina Pangi River to overflow, flooding five villages and displacing about 13,000 families, at least 1,500 of whom stayed in evacuation centers for several days. The death toll was high as tragedy struck late at night when residents were asleep.