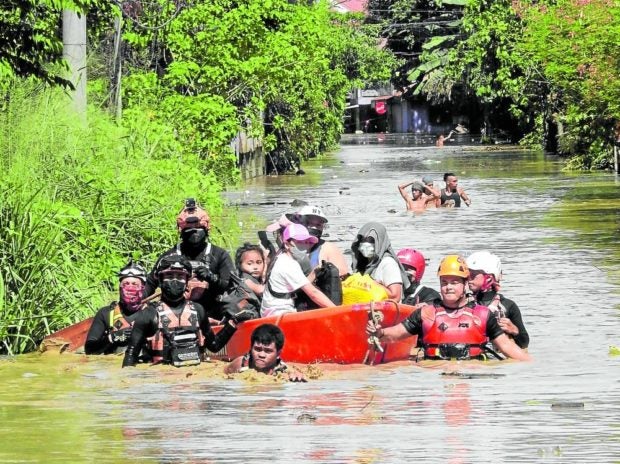 ON WAY TO SAFER GROUND A team of rescuers uses a boat to evacuate residents of flood-hit Jade Valley Subdivision at Buhangin district in Davao City after the Davao River overflowed following heavy rain on Tuesday and Wednesday. —BING GONZALES

Alfredo Baloran, chief of the Davao City Disaster Risk Reduction and Management Office (CDRRMO), said most of the communities hit by floods were near the banks of the Davao River, including some purok (subvillages) at Barangay 5A, 19-B in Bacaca area, Tigatto, Waan, Maa and Barangay Bucana, or 76-A, and some portions of Lasang.

A siren blared at 1 a.m. Wednesday as rescuers and disaster response teams alerted families living near the river to prepare for preemptive evacuation because of the rising river water. By 3 a.m., the CDRRMO had ordered forced evacuation in these communities.

As night fell on Tuesday, the CDRRMO issued an advisory for moderate to heavy rain being experienced in some portions of Paquibato district which could affect nearby areas, and for light rains in Talomo, Poblacion, Buhangin, Bunawan, Agdao and Toril districts.

One of the hardest-hit areas by the floods was Jade Valley Subdivision in Buhangin where shoulder-deep water, or about 1.52 meters (5 feet), engulfed homes, forcing families to flee to nearby Tigatto.

Using lifeboats, rescuers ferried families out of their homes while other residents braved chest-deep floodwaters at 8 a.m. Wednesday.

Later at 3 p.m., families from Jade Valley were waiting for the already waist-deep waters to recede while rain started to fall again. They were temporarily staying in a covered court at Juliville Subdivision.

Some families from Jade Valley camped out along Carlos P. Garcia Highway, disrupting the flow of vehicular traffic in the area.

The city’s social workers provided them with relief goods and meals.

Last month, some 250 families in Buhangin and more than 600 families in Barangay Matina Crossing were affected by floods spawned by sustained heavy rain.