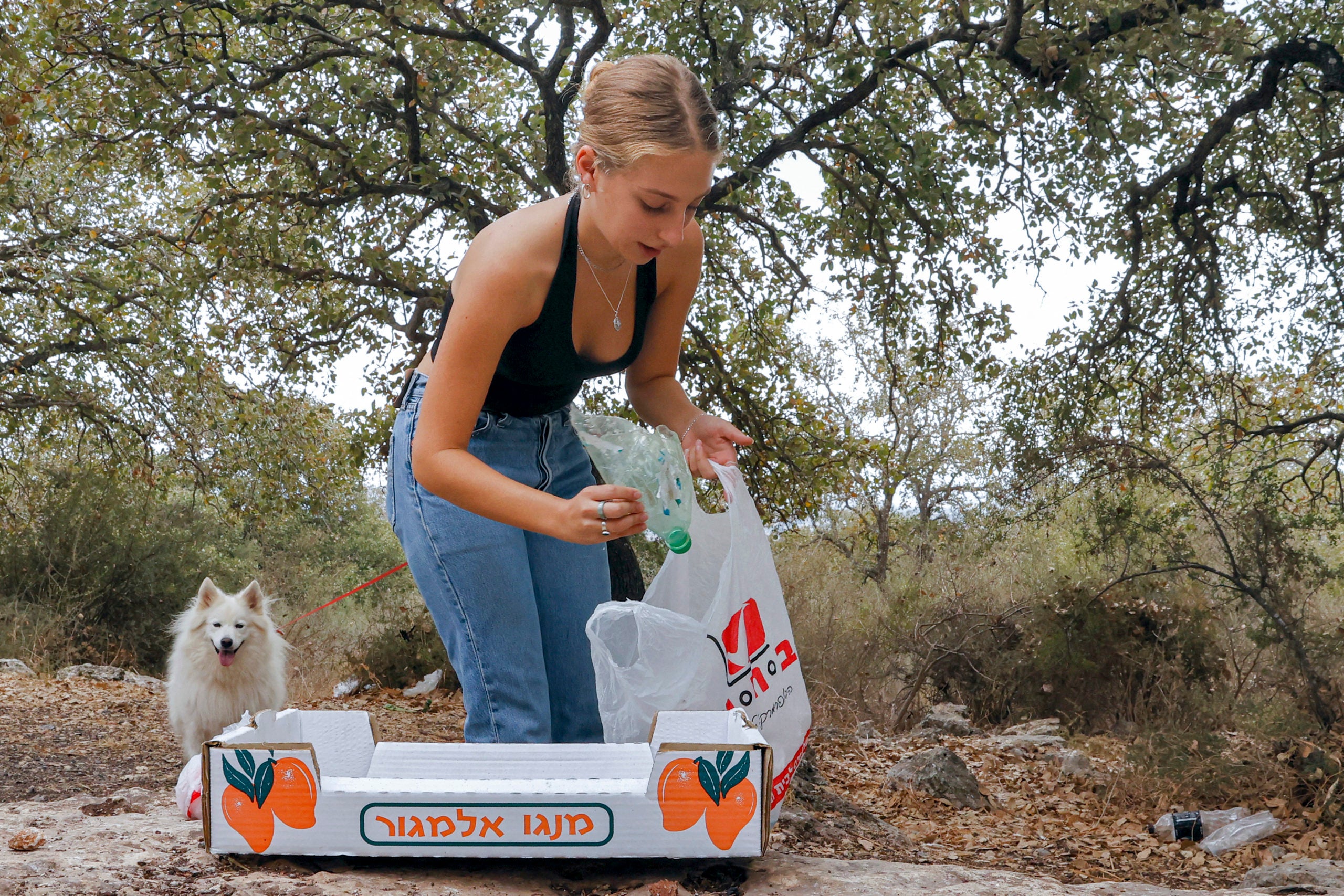 Elishya Ben Meir, an 18-year-old Israeli, uses the “Clean Coin” mobile application to find and safely dispose of abandoned waste as she walks her dog in the town of Kiryat Tiv’on near Israel’s northern city of Haifa on October 20, 2021. (Photo by JACK GUEZ / AFP)

HAIFA, Israel — As she walked her dog Luna near her northern Israel town, Elishya Ben Meir collected litter that had been reported through a new app that turns garbage into goods.

For each bag she fills in the valley near her home, she receives around 10 “Clean Coins,” a virtual currency that can be redeemed for goods from participating businesses.

The green scheme aims to encourage citizens to pick up trash in a country ranked among the world’s leading litter producers per capita.

“People drink, barbecue, and leave all their garbage outside. It’s really unpleasant.”

Before throwing her bags of garbage into a nearby bin, Ben Meir snapped pictures of her day’s haul, which was worth around 30 Clean Coins.

“Each black dot on the map represents waste reported by a user,” said Adam Ran, 35, co-founder and CEO of Clean Coin, demonstrating the app in his office in the northern port city of Haifa.

“By viewing the photos, I can really see the amount of trash, where exactly the trash is located, how many bags are approximately needed in order to collect it, and the amount of credit.”

‘Everyone has an interest’

Gal Lahat, 21, co-founder and technical director, said he designed the app to be playful, with users earning points and unlocking different levels.

“You can see your progress compared to other users, but also when you search for the trash in the field, we want it to look like a game,” Lahat said.

The compensation adds an incentive for people to get outside and clean up, he said.

“Nature benefits from it, and I also get a small personal benefit for myself that gives me motivation,” Ben Meir said before she exchanged her Clean Coins for a T-shirt at a Haifa branch of the surf shop Billabong.

Clean Coin is not a cryptocurrency, with energy-intensive “mining” of coins that requires massive computer power.

Instead, it is a kind of voucher to reward trash collection.

More than 25 brands have joined the network, Ran said, allowing users to redeem coins for clothes, indoor climbing and hotel stays, among other options.

Some supermarkets are poised to join, he added.

The virtual currency is subsidized by several private and public organizations, in particular municipalities and regional councils that see Clean Coin as a tool to optimize waste management.

“Everyone has an interest in it,” Ran said.

Amiad Lapidot, a solid waste expert at environmental advocacy group Adam Teva V’Din, called Clean Coin “a very good thing” in “one of the countries which produce the most waste per capita.”

In all, Israel produces around one million tons of plastic waste per year, which represents about 18 percent of the total waste in the country, he said. That compares to a rate of 12 percent in European countries.

Lapidot said Israelis tend to use and toss plastic bags and packaging, which pollute its coasts and green spaces, and they strongly rely on disposable dishes.

He said Clean Coin could help amplify the effects of government actions his group is promoting, such as extending existing laws levying a deposit on bottles.

Still, he said, it is only a start.

“We must also absolutely find a way to produce less waste,” Lapidot said.