No vaxx, no cash for the poor: Missing the numbers | Inquirer News
Close
menu
search

No vaxx, no cash for the poor: Missing the numbers 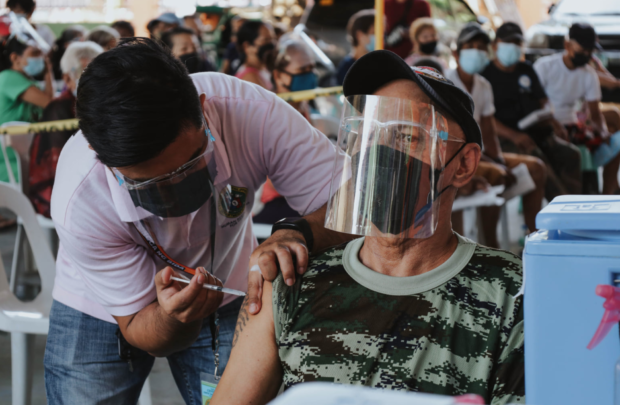 FILE PHOTO: A senior citizen in Olongapo City receives a vaccine dose during the vaccination-on-wheels service of the city government. PHOTO FROM OLONGAPO CITY LGU

The premise was that the poor refuse to get vaccinated and the threat of losing their monthly cash subsidy could prompt them to change their minds.

But it appeared to have missed two key sets of crucial data on the Philippines’ vaccination program—one about access to vaccination venues and the other on overall hesitancy to get vaccinated.

The proposal, pushed by the Department of Interior and Local Government (DILG), has since met backlash from various groups and officials, including those running for key positions in next year’s elections.

The now controversial plan assumes that the poor are hostile to vaccination.

It, however, appeared to have missed key data generated by recent surveys on vaccination acceptance or rejection by people.

Last Aug. 29, Social Weather Stations (SWS) released the results of a survey that showed 29 percent of Filipinos have no access “at all” to vaccination sites. At least 3 percent have access but find this difficult. 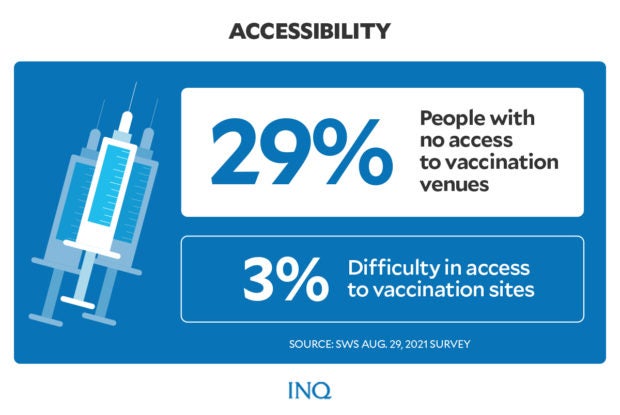 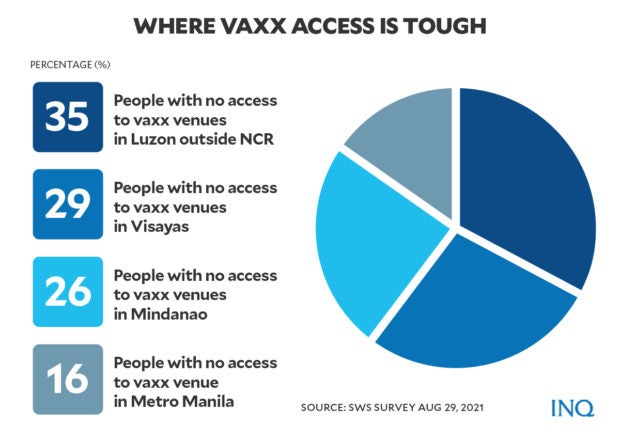 Reasons for people to say they have no access to vaccination sites would vary from the remoteness of the venues to lack of transportation money.

Viewed along with another set of data from another SWS survey, it would appear that the bigger reason that the poor haven’t received vaccines was not hesitancy. 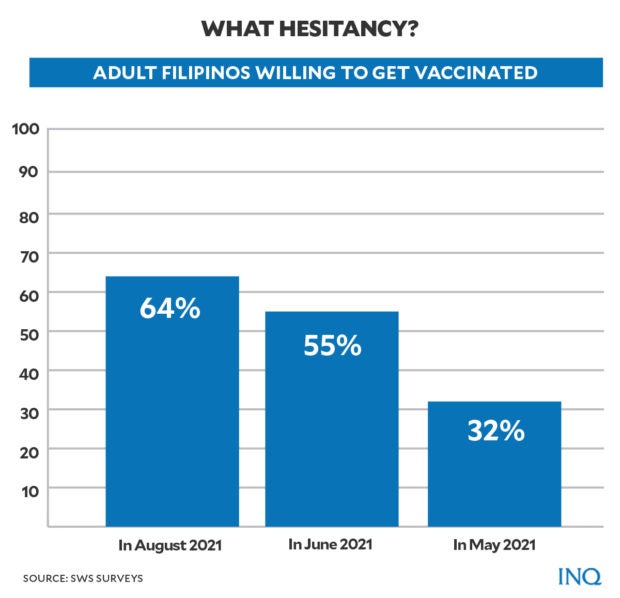 Results of another recent SWS survey showed that vaccine acceptance is rising among people. They said at least 64 percent of Filipinos were already currently willing to be vaccinated. The number was nine percentage points higher than 55 percent in June and double the 32 percent in May.

READ: Thousands now flocking to vaccine sites. What next?

The government’s own set of data on achievements in the vaccination rollout would show a rising trend of people getting vaccinated.

According to the latest data from the National COVID-19 vaccination Dashboard released by the Department of Health (DOH), IATF, and the National Task Force Against COVID-19 (NTF), a total of 63,733,776 doses of coronavirus vaccine have already been administered as of Nov. 6.

Under the A5 priority listing—or the indigent population—at least 5,115,484 individuals have received one vaccine dose and 3,387,296 have already been fully vaccinated.

Though there could still be a long way to go for full vaccination of the poor in the Philippines, the government’s own data said the poverty rate is easing through the years, which means there should be fewer people for vaccination on the A5 list.

Data from the Philippine Statistics Authority (PSA) said that in 2018, the poverty incidence in the country, “or the proportion of poor Filipinos whose per capita income is not sufficient to meet their basic food and non-food needs,” was around 16.6 percent of the whole population. 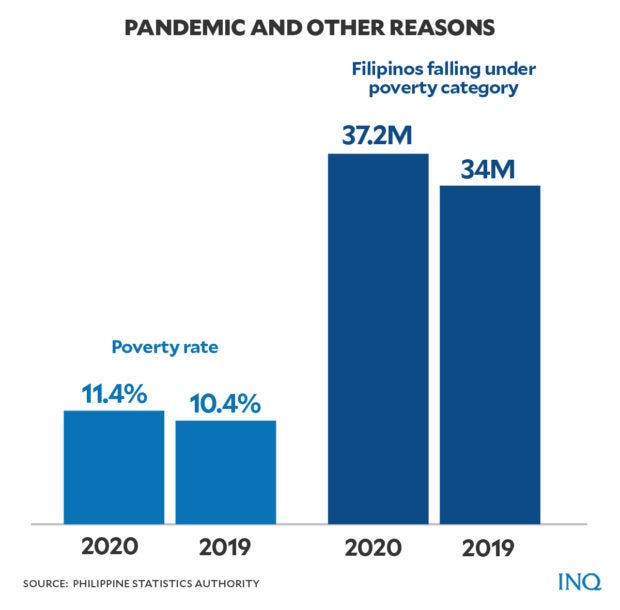 This translated to 17.6 million Filipinos who lived below the poverty threshold which was then estimated at P10,727, on average, for a family of five per month in 2018.

If numbers in 2018 would be the base for estimation, then the government would already have vaccinated at least 48.31 percent of target beneficiaries on the A5, or indigent, list. 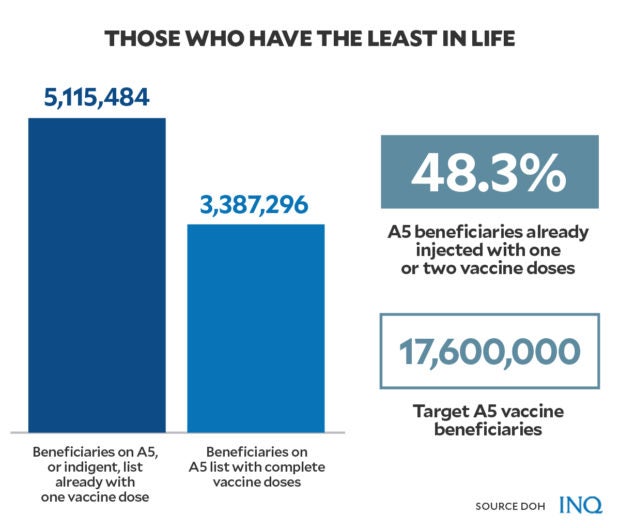 There are no data available on the actual number of the poor who refused to get vaccinated, but it would be highly doubtful that the reason that the entire 51.69 percent of the poor who have yet to receive vaccines haven’t been inoculated was because they refuse to be.

Vaccination in the Philippines, as in many other places in the world, remained to be voluntary and not mandatory. The government, through the Department of Health (DOH), continues to try convincing people to get inoculated.

Last Saturday (Nov. 6), Local Government Undersecretary Jonathan Malaya, also spokesperson of the Department of Interior and Local Government (DILG) cited reports from mayors across the country that over four million beneficiaries of 4Ps are not yet vaccinated against SARS-CoV-2—the virus that causes COVID-19.

Malaya, without citing numbers, said some of the 4Ps beneficiaries, who are the poorest of the poor, have even refused to get vaccinated.

“The 4Ps is called a conditional transfer because before you can get your regular subsidy from the government, you have to meet certain conditions,” he said in an interview with dzBB radio.

“We will just add another condition which is vaccination,” he said.

According to Malaya, Interior Secretary Eduardo Año had already discussed the proposal at a meeting of the Inter-Agency Task Force for the Management of Emerging Infectious Diseases (IATF).

The proposal was also submitted to the Department of Social Welfare and Development (DSWD)—which oversees the antipoverty program of the government.

But so far, there are no clear guidelines yet on the proposed “no vaccination, no subsidy” policy.

READ: DILG proposes ‘no vax, no subsidy’ for 4Ps folk

The proposal quickly drew criticisms from officials and those running for elective positions in 2022.

Vice President Leni Robredo on Saturday (Nov. 6) suggested that rather than making vaccination mandatory, the government should incentivize it.

“For me, it is better to incentivize if there is hesitation. They should be incentivized to get vaccinated rather than punished if they don’t want to be vaccinated,” Robredo said.

The vice president added that penalizing or imposing fines for failure to get vaccinated was ineffective.

Experience from her social work, according to Robredo, taught her that people become more receptive if they see the benefits of social intervention.

“We have seen in our programs that when you give incentives, people agree on their own free will and I think, it’s the more effective way,” she said.

READ: Give people incentives to get vaccinated, says Robredo

“Leni said this many times already, people should not be forced or threatened. There are many solutions that don’t require force, Leni says, based on her experience,” Gutierrez said.

“Getting vaccinated is a personal decision. What the government should do is to convince the people to get vaccinated,” he said.

“In short, incentivize, not penalize. Aid should not be denied. Removing the source of food is not the solution. The 4Ps should be implemented without conditions because it is a help that a family needs,” he added.

“Recipients of 4Ps come from the poorest of the poor. In times of the pandemic, 4Ps is the solution to their struggles. Let us not burden them more,” Binay said.

READ: Ex-VP Binay urges gov’t to reconsider plan of ‘no vax, no subsidy’ to 4Ps folk

In a statement, Anakalusugan Rep. Michael Defensor expressed his rejection of the no vaccination, no subsidy policy for 4.4 million household beneficiaries of the antipoverty program.

“The proposal is downright oppressive and anti-poor, and simply unacceptable. Indigent families and their dependent children will suffer more if they get deprived of their cash subsidies,” Defensor said.

“Instead of penalizing poverty-stricken families, the government should find better ways to further improve public access to vaccination services,” he added.

According to him, a budget of P106.8 billion has been earmarked for 4Ps this year — P99.2 billion of which was allotted for cash grants and included rice subsidies.

Under the proposed P5.024 trillion national budget for 2022, 4Ps had a “higher allocation” of P115.7 billion, according to Defensor.

Senate Minority Leader Franklin Drilon, who was among the authors of Republic Act No. 11310 that institutionalized 4Ps, said that the DILG’s proposed policy was contradictory to what was mandated in the program.

“It is contrary to the 4Ps law to withhold benefits or expel members who are not vaccinated. The DILG cannot just do that. That will be inhuman and totally insensitive,” Drilon said.

“It pains me to see a government that has shown nothing but a total callous disregard for the vulnerable sector of our society. It is yet another display of the government’s callousness,” Drilon said.

“It only shows that the DILG is detached from reality and unaware of the real plight of the poor,” he added.

4Ps was institutionalized in 2019 after President Rodrigo Duterte signed RA 11310 on April 17.

Under the program — which is the national poverty reduction strategy of the government — the government will provide conditional cash transfers to qualified poor households for a maximum period of seven years. 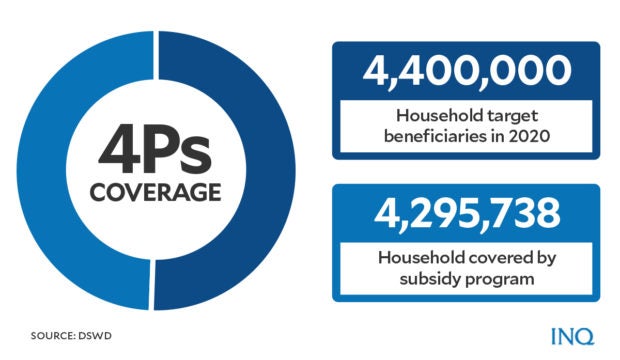 The qualified beneficiaries under the program are farmers, fishermen, homeless families, indigenous peoples, those from the informal sector, and those living in isolated and disadvantaged areas, including in places without electricity.

Sen. Risa Hontiveros said the proposed DILG policy is not in line with the antipoverty program.

“These kinds of policies do not help the poor. There is no condition in the 4Ps law that states a recipient must be vaccinated so officials must respect their decision on inoculation,” she said.

“Conditions under Republic Act 11310 or 4Ps Law are fixed and conditionalities may be suspended because we’re still under a state of calamity until September 2022,” she added.

The DOH on Friday (Nov. 5), expressed its support for the proposed mandatory vaccination for select sectors, including 4Ps beneficiaries.

“We will never achieve immunity for the population if some sectors aren’t vaccinated, one of the things we are looking at is to make vaccination mandatory,” said Health Undersecretary Maria Rosario Vergeire, explaining that the government has increased efforts to improve vaccine confidence amid hesitancy among some sectors.

“That is what we are studying with IATF but definitely if we are going to have this mandated for specific sectors only, DOH will also support this because we need this so that we can achieve protection for the population,” she added.

However, Vergeire clarified that mandatory vaccination is a “last resort” of the government and will apply to vulnerable sectors and those whose work involved constant interaction with people.

She also explained that the health department would heed the statement of the Department of Justice (DOJ) that a law was needed to make vaccination mandatory.

READ: Thousands now flocking to vaccine sites. What next?

READ: SWS: 64% of Filipinos now willing to get vaccinated vs COVID-19

According to Drilon, the government should not assume that the unvaccinated beneficiaries hesitated or refused to get vaccine shots since there are other factors why there were gaps in the proportion of vaccinated population among the poor.

“We cannot assume that they are not vaccinated because they refused vaccines,” said Drilon.

“They are not vaccinated because they have limited access to vaccines especially in the countryside or the rollout remains slow or the vaccines available are not what the people prefer,” the senator said. 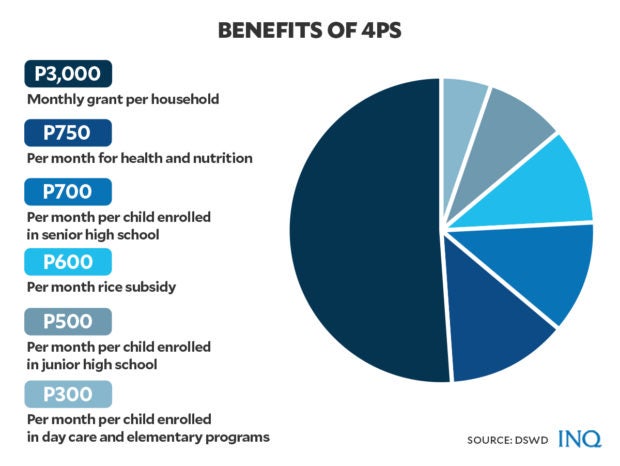 According to the law, families qualified to receive cash grants must be classified as “poor and near-poor,” have members aged zero to 18 years old or pregnant at the time of registration, and willing to comply with the 4Ps conditions.

It is not entirely wrong for politicians, groups and other critics of the proposal to cry that it was anti-poor. But a closer look would show it was just hare brained, at least.