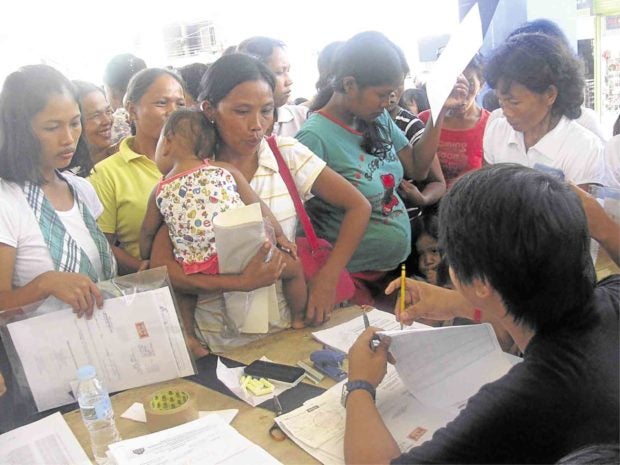 NOW ON ITS THIRD ADMINISTRATION Enrollees in Catbalogan, Samar, avail themselves of the 4Ps program, which has been further institutionalized on President Duterte’s watch. —CATBALOGAN.GOV.PH

MANILA, Philippines — Several lawmakers in the House of Representatives on Sunday hit the Department of the Interior and Local Government’s (DILG) proposal to withhold the subsidy of beneficiaries in the Pantawid Pamilyang Pilipino Program (4Ps)who are unwilling to get vaccinated against COVID-19.

According to Gabriela party-list Rep. Arlene Brosas, the government should instead focus on the vaccine information drive before resorting to such conditions.

“Why not focus on effective vaccine information drives instead of forcing 4Ps to get vaccinated with the new condition?” Brosas.

“Vaccine hesitancy among some Filipinos cannot be solved by another ill-conceived arm-twisting scheme by the DILG in a desperate bid to boost [the] the number of vaccinated Filipinos,” she added.

Brosas also said the DILG cannot just introduce a new subsidy condition at its whim which is not in the 4Ps law or Republic Act 11310.

“Why punish the poor for the government’s gravely incompetent and militaristic pandemic responses?” said Zarate.

“What the people, the many poor especially, still [need] now are adequate and massive health and medical education, as well as an information drive, so they may understand the necessity of vaccination,” he added.

According to Zarate, the vaccination hesitancy is a result of the Duterte administration’s mishandling of the pandemic, after failing to implement free mass testing, as well as ensuring the adequate supply of vaccines and health workers.

“More than anything else, public health education is key to convince people to be vaccinated,” said Zarate.

(The problem is, the Duterte administration opted for a militaristic solution and a sloppy job. Forcing and intimidating people, instead of convincing them with proper and thorough explanations.)

(The DILG’s ‘no vaccine, no aid’ proposal is very anti-poor. It does not help the people especially those who need immediate help in the midst of a pandemic.)

She also explained that it is the government’s responsibility to provide aid to its people and that no conditions should be met for them to do so.

(Everyone has a right to aid amid a crisis, just as everyone has the right to free vaccinations and mass-testing.)

(No condition should be imposed on them before they are given to the people. This is the responsibility of the government.)

Meanwhile, outside the Makabayan Bloc, Anakalusugan Rep. Mike Defensor also shared these sentiments, specifically on the DILG proposal being “anti-poor” and “oppressive.”

“The proposal is downright oppressive and anti-poor, and simply unacceptable. Indigent families and their dependent children will suffer more if they get deprived of their cash subsidies,” Defensor said.

“Instead of penalizing poverty-stricken families, the government should find better ways to further improve public access to COVID-19 vaccination services,” he added.

Earlier, a member of the country’s Vaccine Expert Panel stressed that vaccine hesitancy remains the government’s “biggest challenge” in the COVID-19 immunization program.

However, according to the latest survey results from the Social Weather Stations, the percentage of Filipinos willing to get vaccinated against COVID-19 has risen to 64 percent, higher than the 55 percent recorded in June.

Senators slam DILG proposal for ‘no vaccination, no 4Ps subsidy’