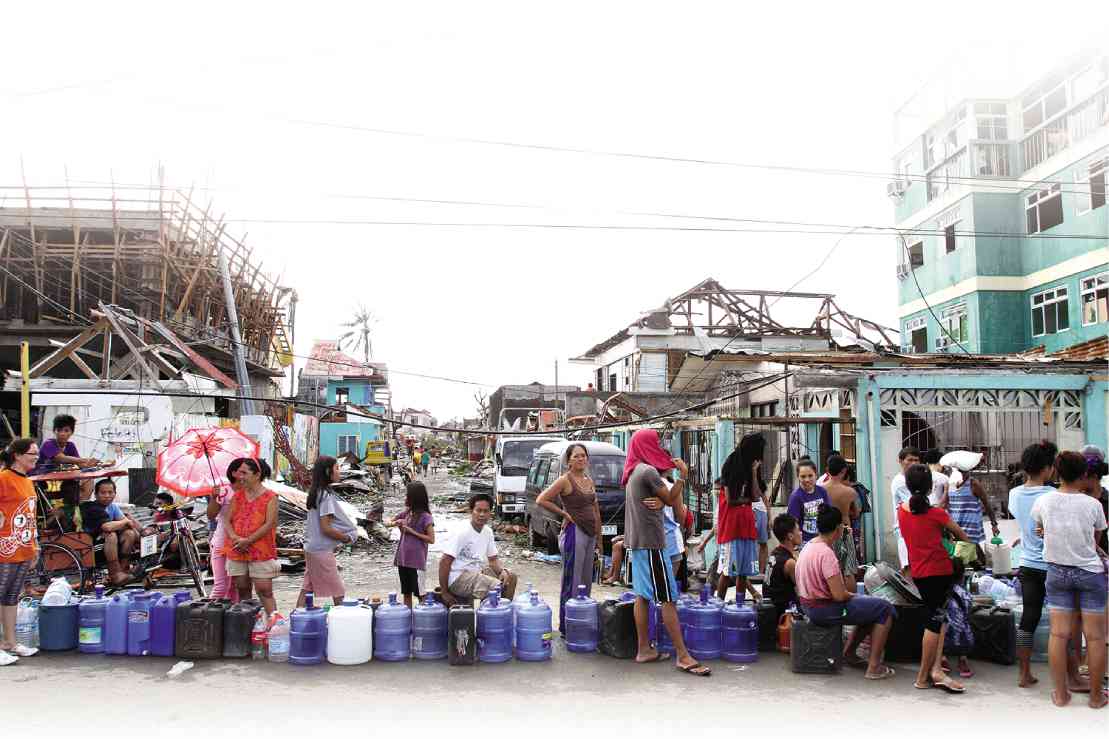 (FILE) SUPERTYPHOON “Yolanda” survivors line up for water after the devastation in Leyte province. This photo was taken on Nov. 9, 2013. NIÑO JESUS ORBETA

TACLOBAN CITY – House Majority Leader Martin G. Romualdez of Leyte’s 1st District and Tingog Rep. Yedda Marie K. Romualdez honored the brave first responders for showing “malasakit” by putting others above self during the onslaught of Super Typhoon Yolanda (Haiyan) that devastated the city and Eastern Visayas eight years ago.

As the nation commemorates this Monday the 8th year Yolandaanniversary, the Romualdez couple also offered prayers for Yolanda victims, stressing they should not be forgotten as their deaths raised awareness on disaster management and prevention not only in the country but in the entire world.

The Romualdezes are among the principal authors of House Bill (HB) No. 5989 or the measure seeking to create the Department of Disaster Resilience (DDR), which the House of Representatives on September 22, 2020 voted 241 against 7 with one abstention to pass the measure on third and final reading. The proposal remains pending in the Senate.

“Eight years ago, we, in Tacloban and other parts of the Visayas islands, experienced up close the horrors brought by Super Typhoon Yolanda. Hindi madaling burahin sa puso at isipan ang sakit na dulot ng nasabing bagyo. We still grieve as we remember our fallen brothers and sisters,” Majority Leader Martin Romualdez, chairman of the House Committee on Rules, said, recalling the destruction on a massive scale of Yolanda, one of the world’s most powerful typhoons in recent history.

“That is why every 8th of November is a date we will hold sacred, when we recall how one of the strongest tropical cyclones ever recorded, struck our home region, leaving tens of thousands of people dead and missing, millions homeless, and livelihoods destroyed. It was the worst of times, the adversities we will always keep in our hearts,” the lady House leader said.

The Romualdezes gave their hefty salute to all first responders, including local and international donors who selflessly and bravely answered the call to protect people and properties despite risking their own safety.

The Romualdez couple said the first responders took part and contributed to the recovery and rehabilitation efforts of the communities affected by the typhoon that provided comfort and hope to them amidst the wrath of devastation.

According to the couple, the people of Region VIII have remained undeterred in looking to the future with greater confidence and in rebuilding once more their homes and lives.

“What eases the pain partly is the collective effort exerted by our fellow Filipinos to help us get back on our feet. Hindi po namin makakalimutan ang lahat ng kabutihan na ipinakita ninyo,” Majority Leader Martin Romualdez, president of the Lakas-Christian Muslim Democrats (CMD), said.

“For a moment, Filipinos have shown to the world what ’malasakit’ means to us as a people. May this trait of empathy continue to burn in our hearts as we all strive to build a better future for our people.

Muli, maraming salamat po sa inyong lahat,” Rep. Martin Romualdez, a lawyer from the University of the Philippines (UP) and president of the Philippine Constitution Association (Philconsa).

For her part, Rep. Yedda Romualdez said “we thank the malasakit of all volunteers especially President Rodrigo Duterte who was then Davao City mayor for coming in Yolanda-hit areas and helped us.”

“We salute those who have helped the city devastated by Yolanda. Every year, we remember the affected communities and honor the memory of thousands of lives who were lost in the tragedy. We are eternally grateful for the heroism, kindness, and generosity of so many countless volunteers, donors, and partners who have helped in saving lives, comforted us in our pain and grief and rebuilt our homes and communities,” she said.

“A truly borderless world has pulled us on our feet. In what was thought to be a time of weakness, the Filipino people showed our greatest strength: Our unmatched resilience and unfailing optimism that comes from our deep faith in God. Indeed, the Filipino people are truly stronger than a super-typhoon,” House Majority Leader Martin Romualdez stressed. “In that time of our greatest need, the whole world embraced us and helped us rise again from the ashes and debris left by the strongest typhoon in recorded human history. Our cry for help was heard across the world and after the day that typhoon came, the world rushed to our aid to bring relief and hope in a sea of utter destruction, an outpouring of support from every race and nation.”

Rep. Yedda Romualdez thanked the Nippon Yusen Kabushiki Kaisha or NYK Line of Japan for being a member of the first responders in Tacloban City.

“For the information of everyone, NYK Line was one of those who immediately provided us with help after the devastation caused by Typhoon Yolanda, in November 2013,” she said.

He said the program helped to pump-prime the local economy in Tacloban City immediately after Yolanda hit Eastern Visayas and other parts of the country where each worker was paid P500 daily after a day of work in clearing the areas of debris.

“This group has been really providing life-saving assistance and they are very quiet in helping my constituents,” according to him.

“The local economy benefited and was boosted by the cash-for-work program of Tzu Chi Foundation. We are blessed to have them in our rehabilitation and rebuilding efforts,” Majority Leader Martin Romualdez said.

Through the cash-for-work program of the Tzu Chi Foundation Philippines, residents are assigned to clean their respective communities, which are filled with piles of rubbish and heaps of debris brought about by Yolanda.