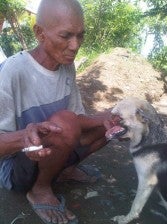 ZAMBOANGA CITY, Philippines—There must have been something about Kabang, the pet dog that recently lost half her face saving the lives of two children. Until she came into their lives as a foundling puppy, the Bunggals occasionally kept dogs but only for meat.

In fact that was what Rudy Bunggal had in mind over a year ago when he found Kabang, then a few weeks old, in a swamp where the unwanted puppy had been left to die.

“The dogs we raised did not last longer than three months. I slaughtered them. It’s our only way of eating meat,” Rudy Bunggal told the Inquirer in an interview. “Life is difficult and I have to feed my family.”

Bunggal, 57, is a “vulcanizer” who earns a living mending punctured tires while his wife, Christina, sells small quantities of candy.

The couple has one daughter, Dina, 11, but a niece, Princess, 3, lives with them.

Neighbors agreed that life for the couple was difficult and that the family subsisted mostly on water spinach—”kangkong” or swamp cabbage—harvested from the nearby swamp.

As Rudy Bunggal tells the story, he plucked Kabang out of the swamp amid heavy rain over a year ago. He initially had the same thought about what to do with the puppy: make a family meal at the right time.

So the Bunggals raised Kabang, initially giving her coffee creamer because milk was expensive.

But days, then weeks and months went by and Kabang never came close to being placed in a cooking pot. Bunggal said he did not know why he never felt any urge to slaughter the animal.

Ricky Llorete, one of the family’s neighbors, said they too had looked forward to eating Rudy’s “azucena,” as dog meat as referred to by Filipinos, after Kabang’s arrival.

Llorete said the Bunggal family was known in the community as dog eaters and would share with their neighbors cooked dog meat.

“During Christmas or New Year, we ate azucena and drank tuba (coconut wine),” he said.

Christina, Rudy’s wife, said she, too, was puzzled when Kabang lasted longer than her predecessors.

“It was maybe because we treated her differently. Of all the dogs we raised, she was the only one we fed coffeemate and milk. None of the other dogs we had raised spent the night in the same space with our daughter,” Christina said.

The family shared whatever food they had with Kabang.

Dina and her cousin would play with the dog, who never ventured alone farther than the door of the Bunggal family’s shanty on Nuñez Extension here.

“If she went out of the house, it would be with the children,” Rudy said.

He described Kabang as a “sweet dog,” who wanted to be cuddled.

Rudy said that aside from providing joy to Dina and her cousin, Kabang would also guard the family’s house against intruders.

“She would sit on the (vulcanizing tools) apparently to prevent strangers from taking them,” Christina said.

Rudy admitted that he could not thank Kabang enough when she saved Dina and her cousin from harm one day last December.

The two girls were walking across Nuñez Extension one day in December unaware that a speeding motorcycle was bearing down on them. From out of nowhere Kabang jumped onto the path of the motorcycle.

Kabang lived but she lost her upper snout, which got caught in the spokes of the motorcycle’ front wheel.

Rudy maintained that the incident was Kabang’s way of repaying the Bunggals for saving the puppy and caring for her.