No more age-based ban: Kids in Metro can finally go out 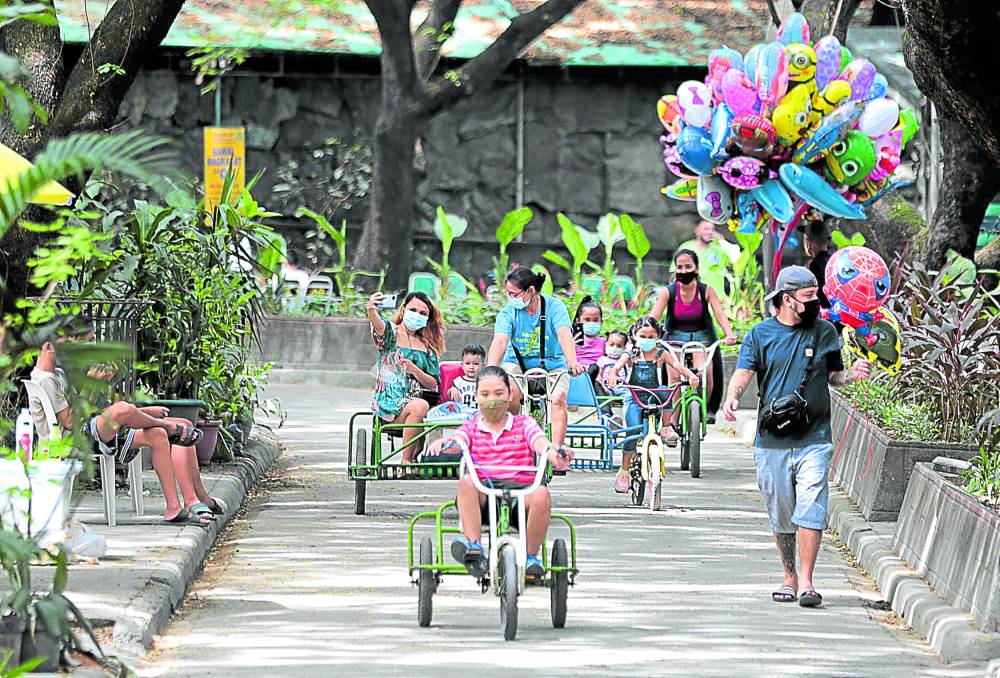 THE ROLLOUT WE MISSED Friday almost feels like a prepandemic Sunday at Quezon Memorial Circle in Quezon City, after the government downgraded restrictions in the national capital to alert level 2 and also announced that, yes, finally, kids can be kids again—outside their homes. —GRIG C. MONTEGRANDE

MANILA, Philippines — Stuck at home since the pandemic began last year, children in Metro Manila can now finally go out and visit malls and other establishments after the capital region was placed under the more relaxed alert level 2, Malacañang said on Friday.

The Inter-Agency Task Force for the Management of Emerging Infectious Diseases (IATF) has also allowed up to 50-percent capacity for limited in-person classes in all degree programs in areas under alert level 2, subject to certain conditions.

“Children in Metro Manila are allowed to go out under alert level 2. Intrazonal and interzonal movement is allowed,” said presidential spokesperson Harry Roque.

There are no longer age-based restrictions on the movement of people under this alert level, and the only restrictions deal with the operational capacity of different establishments.

Health Undersecretary Maria Rosario Vergeire said the risks for children going out amid the COVID-19 pandemic are not as high as for other members of the population.

This is also why the government need not wait for children to be vaccinated before allowing more businesses to further reopen, Vergeire said.

The government only recently included children 12 to 17 years old in its mass immunization drive against COVID-19.

“We need to inform and give assurance to the people that the children—they are the least vulnerable. Like in face-to-face classes and in visiting establishments, as long as we do the safety protocols, mothers will protect them, and the parents are vaccinated, the vaccination of children need not be a hindrance for us to reopen more industries,” Vergeire said at a Palace briefing.

Under alert level 2, establishments can operate at 50-percent indoor capacity for fully vaccinated customers and for those below 18 years of age even if they are unvaccinated.

The establishments can also operate at 70-percent outdoor capacity, and their employees must be fully vaccinated.

They can even operate with an additional 10 percent of capacity if they have been awarded the safety seal certificate, or with an additional 20 percent if the area where they are located has a vaccination coverage above 70 percent for both senior citizens and adults with comorbidities.

Sing with mask on

Roque reminded those who would visit videoke bars to keep their masks on when singing.

As to how a surge in cases could be prevented amid the more relaxed restrictions, Roque said this would still be up to the people who should continue to comply with health protocols.

Roque said colleges may also hold limited in-person classes at 50 percent of room capacity, but only after meeting certain criteria.

He said all students and staff must be fully vaccinated, there must be concurrence from the local government concerned, and the school facilities must be retrofitted for the limited in-person classes as inspected and authorized by the Commission on Higher Education (CHEd).

“There may be limited face-to-face [classes], but these would not be instant. There would be no face-to-face (classes) on Monday,” Roque said.

Limited in-person classes for basic education are also permitted under alert level 2, subject to prior approval of the Office of the President, he said.

CHEd Chair Prospero de Vera III said the guidelines for the expanded face-to-face classes would be released next week.

He said schools should also write to CHEd about their intent to reopen to conduct face-to-face classes.

More than 1 million, or one-third of the 3 million students, in higher education were already vaccinated as well as more than 70 percent of faculty and education personnel under CHEd.

As for the alert levels, Vergeire said the system first piloted in Metro Manila to avoid large-scale lockdowns would be expanded to all areas in the country by December.

“There are new areas that will be included in the pilot implementation next week and then up to the end of November. By Dec. 1, the entire population or all areas of the country will be part of the shift in policy and we will begin its full implementation,” she said.

Read Next
DOH now considering mandatory vaccination
EDITORS' PICK
Metro Manila’s COVID-19 cases on downward trend, but surge not over — OCTA
House energy committee chair Arroyo bats for cheap electricity
Unleash the photographer in you this World Photography Day with vivo smartphones
Palace warns sugar hoarders after raid on Pampanga warehouse
Look Through: The fate of impounded stray dogs
What to watch out for when selecting a video surveillance solution
MOST READ
Man abducted in Batangas gasoline station, found dead in Quezon
Nica del Rosario to wed partner in Australia
Palace warns sugar hoarders after raid on Pampanga warehouse
Lawyer who gets P20K worth of no-contact apprehension penalty seeks SC help
Don't miss out on the latest news and information.