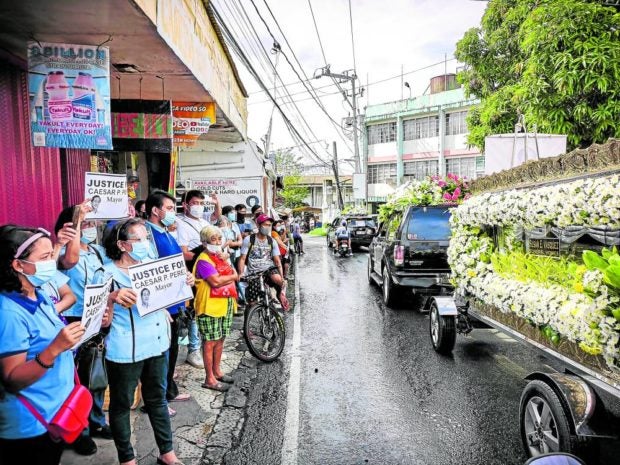 LAST RESPECTS In this photo taken in December last year, residents of Los Baños, Laguna, and employees of the municipal government pay their last respects to slain Mayor Caesar Perez during the official’s funeral. —CLIFFORD NUÑEZ.

BAGUIO CITY — After hiding from the authorities for nearly a year, the primary suspect in the murder of Mayor Caesar Perez of Los Baños town, Laguna province, was arrested here this week, police said on Thursday.

Norvin Tamisin, a former Los Baños councilor, was tracked down at Bareng Drive in Barangay Bakakeng Sur here at 5 p.m. on Nov. 2 by agents of the Criminal Investigation and Detection Group (CIDG).

Reports from the Cordillera regional police said Tamisin was arrested based on a warrant issued by Judge Rene Deveza Natividad of the Regional Trial Court Branch 107 in Los Baños.

Tamisin is facing a murder charge for the death of Perez, who was shot and killed on the municipal hall grounds at 8:45 p.m. on Dec. 3 last year. The mayor died while being treated in a hospital.

But the mayor’s son, Aldous Perez, on Thursday said the arrest of Tamisin was just the start of the family’s quest for justice.

“I believe that my father’s murder is politically motivated, that there are some influential and rich people behind this crime,” Aldous, in a social media post written in Filipino, said on Thursday.

Aldous appealed to Tamisin to disclose the truth behind his father’s death.

Tamisin was linked to the killing after witnesses saw him at the crime scene.

In the 2019 mayoral election, Tamisin ran but lost to Perez, a longtime mayor of Los Baños, prompting the slain official’s family to believe that local politics was behind his murder.

In previous interviews, Tamisin denied the allegations, saying the CIDG and the National Bureau of Investigation “found nothing” on him.

Former civil registrar Glenn Arieta was also charged in connection with the killing. Arieta used to head the Information and Communication System Office that oversaw the public security camera system of the town at the time of Perez’s murder.

Aldous, who is running for vice mayor of Los Baños in next year’s elections, thanked all policemen involved in the arrest of Tamisin but said the family would continue exhausting all means to attain justice.

Perez, 66, had also served as vice governor of Laguna and was included in the national government’s watchlist of government officials allegedly involved in the illegal drug trade, an accusation the mayor had repeatedly denied before he was slain.

In a public address after the killing, President Duterte distanced himself from the government list of local officials linked to the drug trade as he offered sympathies to Perez’s family.

The President explained that the names on the list did not come from him but from intelligence sources of law enforcement agencies.

The Perez family had maintained that the mayor was not involved in the drug trade and noted that he had taken steps to clear his name.

In May 2017, the mayor’s younger brother, Ruel, 48, was also shot dead by two men. The case remained unsolved.