MANILA, Philippines — Senator Richard Gordon on Thursday turned the tables on President Rordigo Duterte as the lawmaker cited the chief executive’s “admission” to alleged corruption in 2017.

(Last night, he lambasted me again… I will not bother to answer that because that is just part of a barrage that the President should have not said.)

(What I will tell the public, so that people would know, is as simple as this — the President said this on June 28, 2017 at the Philippine Chinese Charitable Association: “I hate corruption. I am not making myself clean here. I have also stolen a lot but they are all gone now.”)

Gordon said this was an “admission against self-interest.” 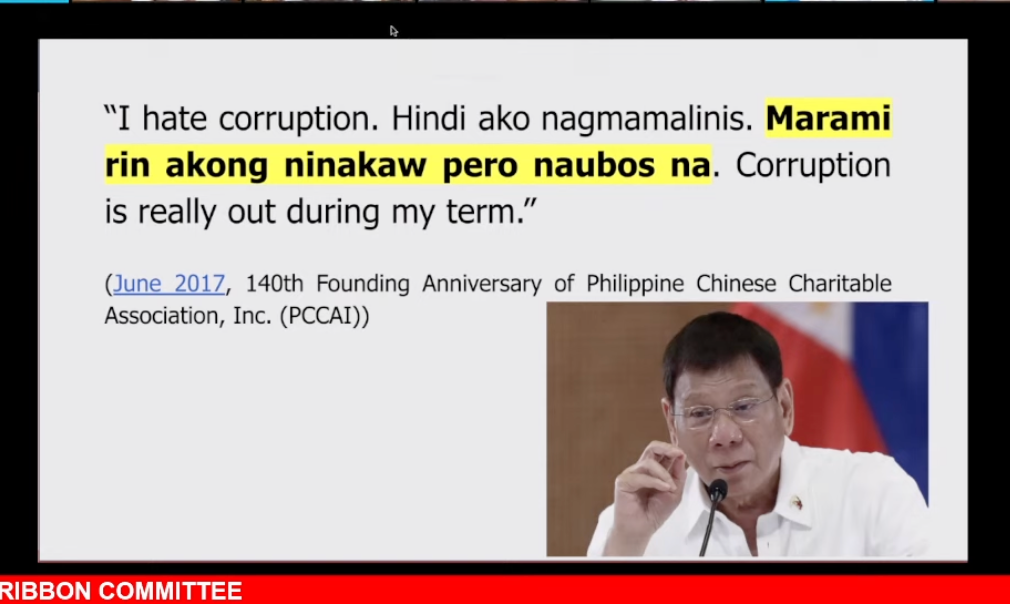 (That is my only answer, Mr. President. You yourself admitted of stealing from the government. We didn’t say that. You were the one who said it.)

“Wala po akong nagsasabing nagnakaw kayo [I am not saying that you stole something],” Gordon added.

In a public address aired earlier Wednesday, Duterte again targeted Gordon and Senate Minority Leader Franklin Drilon as objects of his tirade, saying he would not be the country’s president if he is “corrupt like them.”

Drilon, for his part, refuted Duterte’s corruption claims against him.

“I am not corrupt…My record is clear and my conscience is clean,” Drilon said in an earlier statement.

“In my 32 years in public service — nine years in the executive and 23 years in the legislative — I have never been tried for corruption in the Ombudsman or Sandiganbayan,” he added.