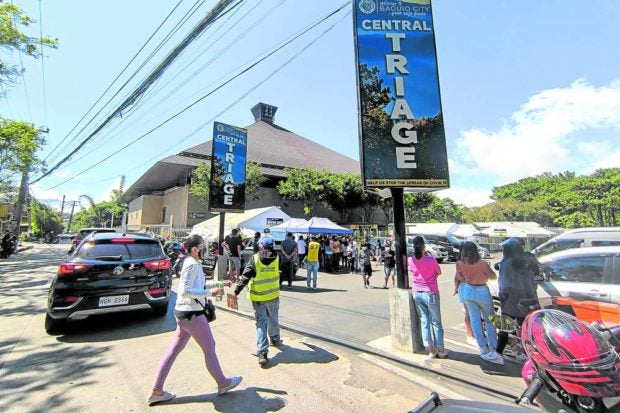 The 8,247 tourists were screened by the Baguio Visitor Information and Travel Assistance (Visita) platform, and the biggest number of arrivals (2,630) were cleared to enter city borders on Oct. 30, Aloysius Mapalo, Baguio tourism supervisor, told the Inquirer.

The tally includes guests of Camp John Hay and the Baguio Country Club, which operate their own medical triage, he said.

On Monday, All Saints’ Day and a holiday, a total of 2,097 guests entered the city as early morning temperatures started to drop to an average of 15 degrees Celsius.

Weekend visitors started arriving as early as Oct. 29 when Visita recorded 1,127 tourists, while the city received 2,420 guests the following day.

After attending Mass at Baguio cathedral, people on Sunday gathered on Session Road. Some street performers were in costumes, appearing as witches, fairies or characters from the hit streaming series “Squid Game.”

Session Road is again closed to traffic on Sundays to allow people to sample food or buy crafts sold by small businesses.

“It’s not about eradicating the virus, but more of protecting ourselves against the virus. We have fully vaccinated 70 percent of eligible residents and our tourism workers are 100-percent fully vaccinated,” he said.

Mapalo added: “The aim is to inoculate up to 90 percent of the eligible residents by the end of the year.”

In October last year, Baguio was the first city during the first year of the pandemic to allow back tourists at a limited capacity through a travel bubble with the Ilocos region. But tourism activities were again suspended in September because of the spike in COVID-19 infections toward the end of August. 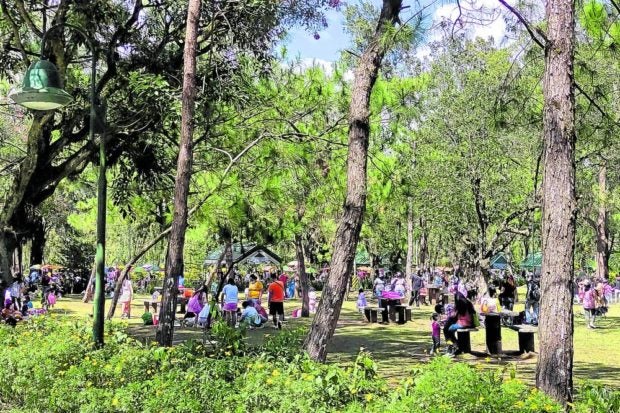 PARK SHADE Groups of visitors on Sunday secure their spots at Burnham Park’s tree-lined picnic area as Baguio City welcomes tourists during the weekend leading to All Saints’ Day. The summer capital has reopened for leisure travel as the city’s COVID-19 cases started to drop. —NEIL CLARK ONGCHANGCO/Contributor

Baguio’s active COVID-19 cases rose to over 4,000 for days in September due to the highly contagious Delta variant before subsiding in October.

As of Monday, the city’s total number of active cases was 375 out of the total 29,327 patients since the pandemic was declared in March last year. The disease has killed 665 residents.

In Ilocos Sur, the province will start accepting visitors again beginning Nov. 5 after shutting its doors to leisure tourists for more than a month due to a surge in COVID-19 cases and the aftermath of Severe Tropical Storm “Maring” (international name: Kompasu).Local officials said the reopening of tourism would revive the province’s pandemic-hit economy as it strives to bring down the active number of infections, which currently stood at 895.On Monday, the province eased back to general community quarantine (GCQ) from GCQ with heightened restrictions.

At least 21 areas in the province were placed under enhanced community quarantine (ECQ), the strictest containment classification, for two weeks since Sept. 22 to contain the virus spread.

All local tourists are allowed to visit the province, except those coming from areas under ECQ, modified ECQ, and alert levels 4 and 5, according to the Ilocos Sur tourism office.

A negative antigen test taken within 24 hours prior to entry to the province would be required as a minimum testing requirement for incoming tourists based on local guidelines.

“Tourists who have relatives and friends in the province shall not be allowed to stay in the latter’s residences, but shall be required to stay in prebooked (Department of Tourism)-accredited accommodation facilities,” according to the tourism office.