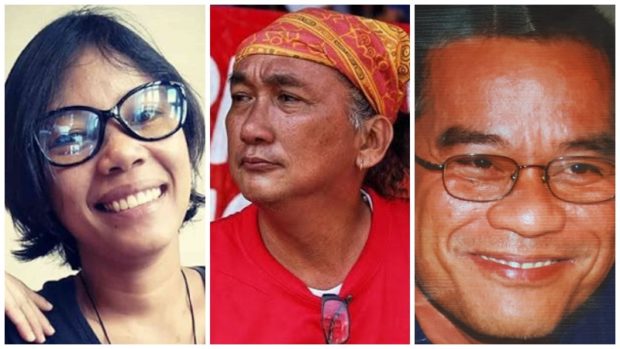 ILOILO CITY, Iloilo, Philippines — Clarissa Ramos could only light and offer a candle virtually for her slain husband and human rights lawyer Benjamin “Ben” Ramos Jr. on All Souls’ Day.

“I offer this candle to our departed loved ones and to the thousands who have offered their life for the road to peace. Let us remember their courage and let them inspire us to continue their fight until we realize genuine democracy. We will not stop praying and fighting for justice,” Clarissa said.

A gunman on a motorcycle shot and killed Ramos on Nov. 6, 2018, near their house in Kabankalan City in Negros Occidental province.

He was killed after he was repeatedly red-tagged and accused of being a part of the Communist Party of the Philippines (CPP) and New People’s Army.

Ramos was the founder of the nongovernmental organization Paghida-et sa Kauswagan Development Group and a founding member of the National Union of Peoples’ Lawyers.

Alvarez, on the other hand, was repeatedly shot by a masked gunman as she was going home to her boarding house at Barangay Mandalagan in Bacolod City on Aug. 17, 2020.

She served as a paralegal of the human rights group, Karapatan, and helped document killings of rights workers and activists on Negros Island.

Like many other killings of members of progressive groups in Negros, no arrest has been made for their deaths.

“We remember them because our families continue to feel the pain. They are victims of state violence. The perpetrators have escaped justice until now while many human rights defenders and progressive organizations continuously face threats and repression,” Clarissa said.

Like Clarissa, Lean Porquia could also not visit the remains of his father, Jose Reynaldo “Jory” Porquia, at a columbarium in Iloilo City.

“I wish that our family can together visit him but for now we can remember Tatay in our own personal spaces,” Lean told the Inquirer in a telephone interview on Sunday.

Lean, who is a union organizer of employees of business process outsourcing firms, said observing All Souls’ Day for him was not only remembering his father but continuing their cry of justice.

At the height of a city-wide lockdown due to the COVID-19 pandemic, masked armed men gunned down Jose Reynaldo on April 30 last year at a rented cottage at Barangay Sto. Niño Norte in Arevalo District, Iloilo City.

At the time of his death, Jose Reynaldo was Bayan Muna Iloilo City coordinator and was leading a feeding program for those worst affected by community quarantine restrictions.

A popular youth leader during the Marcos dictatorship, he was repeatedly Red-tagged before he was gunned down. No arrest has been made a year and a half after his killing.

“Our own Calvary has not ended and has even worsened,” Lean said.

He said his family cannot be together to visit his father due to continued Red-tagging.

In September, two alleged former communist rebels filed a complaint before the Department of Justice against Lean, CPP founding chair Jose Maria Sison and two others, for child abuse and trafficking of minors for allegedly recruiting them in the rebel movement when they were minors.

Lean’s mother, Josephine, and sister Krisma have also been accused as members of the rebel movement.

“After my father’s death, they still want to silence us,” Lean said.

He said the families of other victims of extrajudicial killings, including lawyers, human rights defenders, indigenous peoples leaders and farmers, are also crying for justice.

“There’s a climate of fear among our families and we continue to grieve for our loved ones and remember them today,” Lean said.

Read Next
Marcos to DepEd: Ensure safety of students, teachers
EDITORS' PICK
DOH: 28,471 new COVID-19 cases in PH; active cases now 284,458
On Day 2 of implementation, gov’t says workers now exempt from ‘no vax, no ride’ policy
Over 3 Million worth of prizes to be won at Smart Padala’s SENDali Manalo Promo!
Acer starts the year off strong with the Aspire Vero National Geographic Edition
Metro Manila posts lowest temperature yet this ‘amihan’ season at 19°C
Gear up and get ready to play with Yamaha Mio Gear
MOST READ
Derek Ramsay on being married to Ellen Adarna: ‘Gumaan ‘yung mundo ko’
Emma Stone calls Andrew Garfield a ‘jerk’ after he ‘lied’ about his ‘Spider-Man: No Way Home’ appearance
Lucky plants to grow in 2022
Retirements prompting major reshuffle in PH military
Don't miss out on the latest news and information.