Lung cancer: The deadliest type of cancer in PH 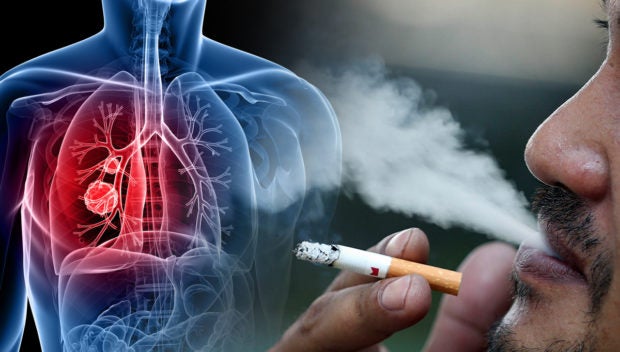 MANILA, Philippines—Lung cancer is the second most common type of disease globally, according to World Health Organization (WHO).

Lung cancer has been the most common form of the disease for the last two decades. However, last year, breast cancer took the top spot.

In observance of Lung Cancer Awareness Month, INQUIRER.net will present data on lung cancer cases in the Philippines, as well as other information on the disease.

Lung cancer has the biggest incidence rate of 59.6 percent in Asia last year compared to other regions, according to data by the Global Cancer Observatory (GCO) published in its online database, GLOBOCAN 2020.

In the Philippines, there were a total of 19,180 new cases of lung cancer last year. This was 12.5 percent of the total 153,751 new cases of cancer in the country last year among men and women and all ages. 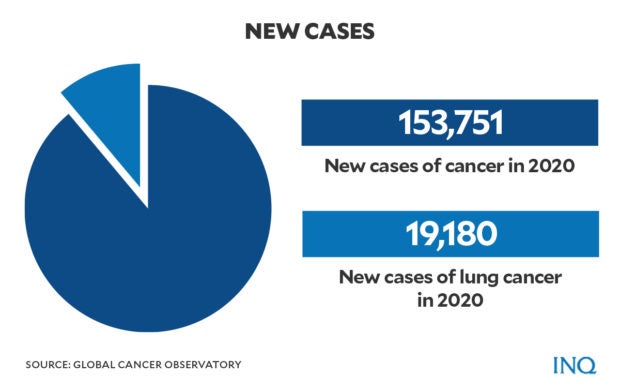 Lung cancer ranked second as the most common type of the disease in the Philippines, following breast cancer with a total of 27,163 new cases last year.

READ: Breast cancer overtakes lung as most common cancer – WHO

It is followed by colon cancer, liver cancer, and prostate cancer. 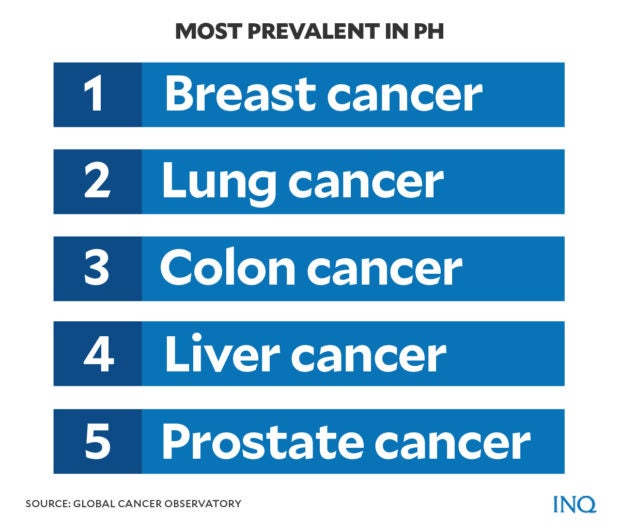 However, among the male population in the country, lung cancer remained the most prevalent type with 13,406 new cases recorded last year or 19.9 percent of the 67,267 total new cancer cases.

New cases of lung cancer last year among the female population in the country were at least 5,774 or 6.7 percent of the new cancer cases.

It was only the fifth most common type of cancer among the female population in the Philippines last year. 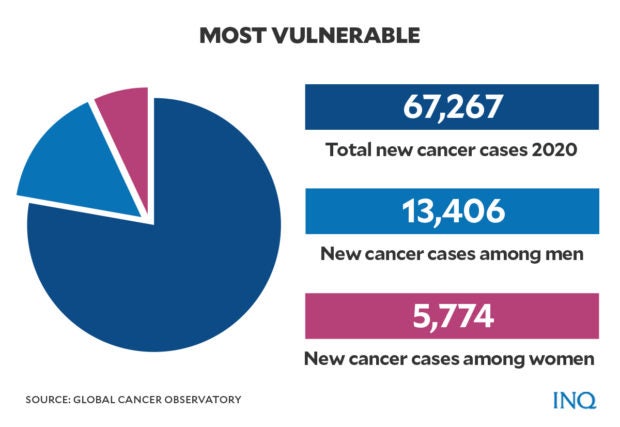 The figures made lung cancer the deadliest cancer type in the country last year. 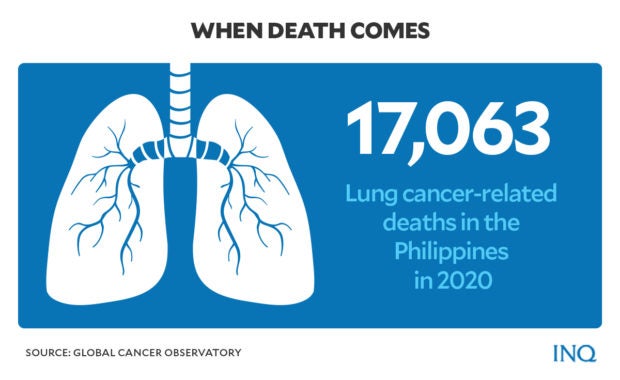 While lung cancer begins in the lungs, it could spread through the bloodstream, invade lymph nodes, and metastasize in the brain, bones, liver, and other organs, according to the Philippine Cancer Society.

The US Centers for Disease Control and Prevention (CDC) explained that these types of cancer grow differently inside the body and require different treatments.

The lung disease may manifest itself through a variety of signs and symptoms such as:

• coughing which gets worse or does not go away
• chest pain
• shortness of breath
• hoarseness or wheezing
• coughing out blood
• chest infection
• malaise
• poor appetite
• unexplained weight loss
• exhaustion, weakness, or drowsiness
• clubbing of the fingers (thickening of the fingertips with typical nail changes) 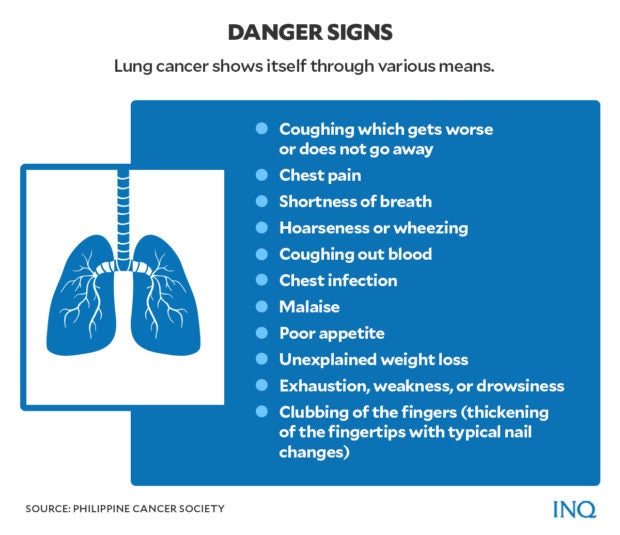 The US CDC noted that in some cases when cancer has metastasized or has spread to other parts of the body, there might be specific symptoms in the affected part of the body—like pain in the bones.

Meanwhile, some people might experience general symptoms of not feeling well.

Unfortunately, some signs and symptoms may not show at an early stage.

“Most people with lung cancer don’t have symptoms until the cancer is advanced,” said the US CDC.

There are four stages of non-small cell lung cancer. 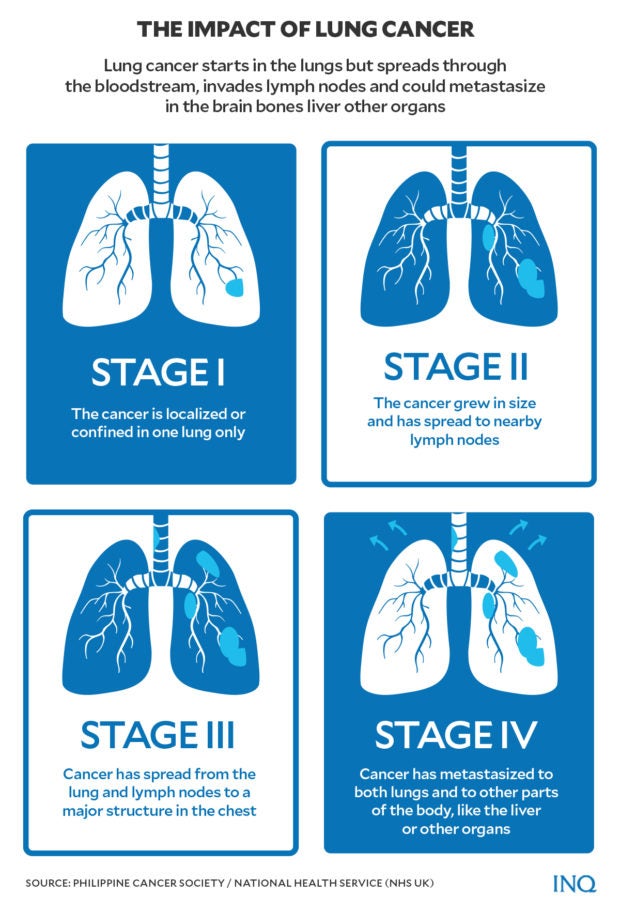 The first two stages are considered as early stages of lung cancer, while the last two are advanced or late stages.

READ: Tobacco use in PH: Health, income going up in smoke

However, active smokers — or those who smoke at least a pack of cigarettes per day for 30 years — are not the only people who are at the highest risk of getting lung cancer.

Even non-smokers can be at risk by inhaling secondhand smoke.

Meanwhile, The Medical City listed other causes of lung cancer, such as:

• Exposure to radon — a colorless, odorless radioactive gas which occurs naturally in soil. Exposure to radon, according to the Philippine Cancer Society, is the second leading cause of lung cancer.
• Industrial exposures — exposure to hazardous compounds like asbestos, uranium, nickel, arsenic, and petroleum products may increase the chances of getting lung cancer.
• Air pollution — diesel exhaust and other air pollutants may also cause lung cancer, according to the hospital.

“Genetic disposition may also play a role in lung cancer development,” it added.

During surgery, doctors remove the cancer tumor as well as any affected lymph nodes which may contain cancerous cells.

Meanwhile, radiation therapy — also known as radiotherapy, X-ray therapy, or irradiation — focuses on damaging cancer cells through X-rays to prevent them from growing or multiplying.

Patients under chemotherapy are required to take drugs that could help kill cancer cells. This type of treatment is usually systemic, meaning “it goes through the whole body and therefore should affect cancer cells anywhere they may be.”

On the other hand, surgery and radiation are often used to treat local diseases.

Other patients may also be prescribed targeted therapy, which uses drugs that “target” specific changes in cancer cells.

“In cancer, there may be too many growth factors present, or the receptor may be mutated so that it “thinks” the growth factor is attached when it really isn’t,” said the Philippine Cancer Society.

“Some drugs block these receptors to stop the cancer from growing and/or spreading, thereby ‘targeting’ the cancer,” it added.

The best prevention against lung cancer, The Medical City said, is to never smoke cigarettes or tobacco products.

“[I]f you are a smoker, quit immediately,” it added.

The Department of Health (DOH) advised everyone to take utmost care of their lungs.

“It is important to take care of our lungs to avoid the risk of getting cancer,” DOH said.

“It is more comfortable to breathe if our lungs are healthy,” it added.