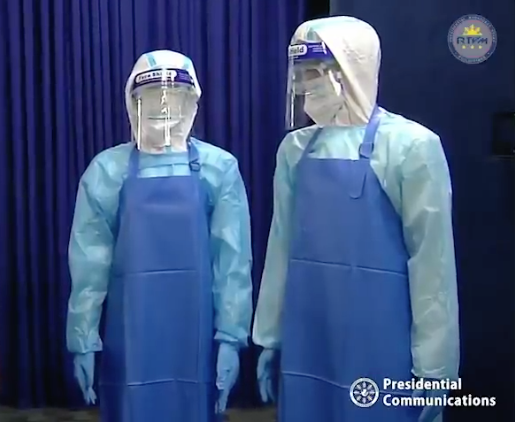 Mannequins wearing complete PPE suits that were procured by the Duterte government were used as props by presidential spokesperson Harry Roque, Jr. during his briefing in Malacanang last September 6, 2021 to belie claims of overprice. Screengrab from RTVM

MANILA, Philippines — China’s Xuzhou Construction Machinery Group (XCMG) on Tuesday decried “false and damaging” tax evasion allegations against it as the firm maintained that all its medical supply deals with the government are aboveboard.

In a statement, Atty. Kim Baltazar, the lawyer of XCMG and a partner at Espejo Law firm, said the company “acted in good faith” and only responded to the request of the Philippine government to deliver personal protective equipment (PPE) sets for Filipino health workers at the height of the COVID-19 pandemic when global supply was scarce.

“We responded to an urgent call from the Philippine government to deliver PPEs to protect Filipino medical frontliners from COVID-19,” Baltazar said.

In a Senate blue ribbon committee hearing last Oct. 19, several senators urged the Bureau of Internal Revenue to look into the transactions of the Procurement Service-Department of Budget and Management (PS-DBM) with the Chinese firm over fears of possible “unpaid” income taxes in the Philippines.

They also learned that the company was not an accredited importer of the Philippine Bureau of Customs. The firm’s country manager told senators during the hearing that it is “accredited by the Chinese customs” and that the customs clearance in the Philippines was handled by the PS-DBM.

Baltazar stressed that XCMG’s transactions with the government in connection with its pandemic response were all aboveboard and covered by local and international laws.

“Therefore, we shall not allow the company’s name to be tarnished by any accusations of illegal tax evasion,” she added.

Baltazar pointed out that under the National Internal Revenue Code and international regulations, exporters involved in international trade are “not required to register at their destination and shall pay no income tax to the destination country.”

She added that the two batches of PPE deliveries to the Philippines, which consisted a total of 1.25 million sets, “were conducted on the CIF (cost, insurance, and freight) terms.”

“Our company is only responsible for export delivery, not the import, sales, use, and links in the Philippines. Hence, the transaction is deemed completed once the goods are loaded at the Chinese port,” Baltazar said.

Baltazar, meanwhile, slammed “malicious insinuations” on the photographs of XCMG officials with President Rodrigo Duterte in 2017. She said the occasion was part of an official visit, where executives of foreign companies paid a courtesy call to the new administration.

She then stressed that the XCMG is a “reputable company both in Beijing and internationally,” owning more than 60 enterprises, covering eight business sectors with more than 26,000 employees.

Further, she said the company is “highly-qualified” to export all kinds of medical devices and equipment that conform to the strictest international standards of quality.

The Chinese firm, the lawyer, added had the experience and capability of delivering medical devices in more than 10 countries, including the