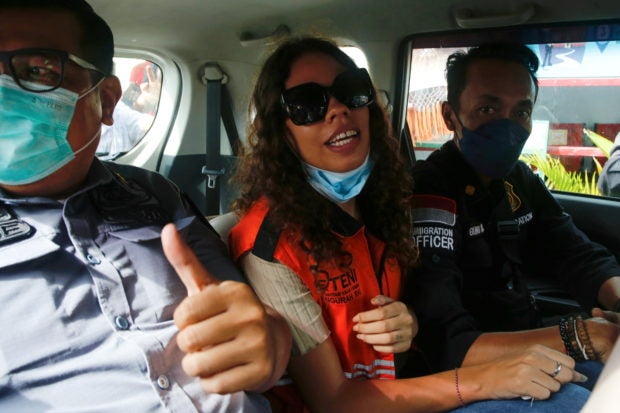 Heather Mack, an American woman jailed in 2015 with her boyfriend after being found guilty for playing a role in murdering her mother and stuffing the remains in a suitcase, is seen inside an immigration car, after being released from Kerobokan Prison in Denpasar, Bali, Indonesia, October 29, 2021. REUTERS

JAKARTA — An American woman who was recently released from prison after serving part of a 10-year sentence for her role in the murder of her mother will be deported and return home on Tuesday, an immigration official in Bali said.

Heather Mack, originally from Chicago, was jailed in 2015 with her boyfriend Tommy Schaefer for killing her mother Sheila von Wiese-Mack and stuffing her remains in a suitcase on the Indonesian island of Bali.

Arrested in 2014 in a case that captured global attention due to its grisly nature, Schaefer was sentenced in 2015 to 18 years for premeditated murder, while Mack, then 19, received a 10-year sentence for being an accessory to murder.

Last week, Mack was released from prison after being given a 34-month remission for good behavior, according to Kerobokan prison’s chief for women inmates Lili, who goes by only one name.

I Putu Surya Dharma, the immigration official, told Reuters on Tuesday Mack was now being deported, in accordance with Indonesian law.

“She’s served her punishment and her permits expired,” he said, adding that Mack’s flight was due to leave on Tuesday evening and that she would be arriving in Chicago’s O’Hare airport.

Mack had given birth to a baby before she was sentenced. Mack’s lawyer, Yulius Benyamin Seran, told Reuters the child would be returning with her to the United States.

Asked about other details of her deportation, the lawyer said:

“I can’t answer that question. After I meet with Heather before she’s deported, I will be able to answer.”

Read Next
Manila gears for ‘smart city’ status with Microsoft help
EDITORS' PICK
On Day 2 of implementation, gov’t says workers now exempt from ‘no vax, no ride’ policy
Gear up and get ready to play with Yamaha Mio Gear
DOH: 28,471 new COVID-19 cases in PH; active cases now 284,458
Metro Manila posts lowest temperature yet this ‘amihan’ season at 19°C
Over 3 Million worth of prizes to be won at Smart Padala’s SENDali Manalo Promo!
Acer starts the year off strong with the Aspire Vero National Geographic Edition
MOST READ
Emma Stone calls Andrew Garfield a ‘jerk’ after he ‘lied’ about his ‘Spider-Man: No Way Home’ appearance
LOOK: Edu Manzano, Cherry Pie Picache enjoy Palawan with her son Nio Tria
Unvaccinated has rights but it has limits—DOJ
Retirements prompting major reshuffle in PH military
Don't miss out on the latest news and information.