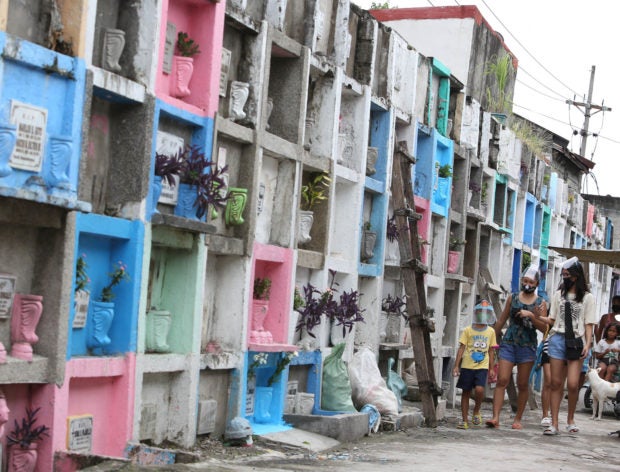 REMEMBERING A cemetery in Pasay City on Monday receives visitors paying respects to their departed relatives. Public cemeteries and private memorial gardens all over the country were closed during the traditional “Undas” (All Saints’ Day and All Souls’ Day) to avoid mass gatherings and as a precaution against the spread of COVID-19. —MARIANNE BERMUDEZ

MANILA, Philippines — More than 48,000 quarantine protocol violators were apprehended in the entire country on Monday during the celebration of All Saints’ Day, the Philippine National Police (PNP) reported.

The violations were committed despite the nationwide closure of cemeteries in the country from October 29 until November 2, which was implemented to minimize the spread of COVID-19.

Most of the violators, comprising 652,917 of the total number, broke simple rules on minimum public health standards like wearing of face masks and face shields, and maintaining physical distance.

There were also 101,120 curfew violators, and 33,948 non-authorized persons  who were outside of residence.

Despite the recorded number of quarantine protocol violators, health officials earlier reported a significant drop in new COVID-19 cases nationwide with its reproduction number down at 0.52, according to OCTA Research.