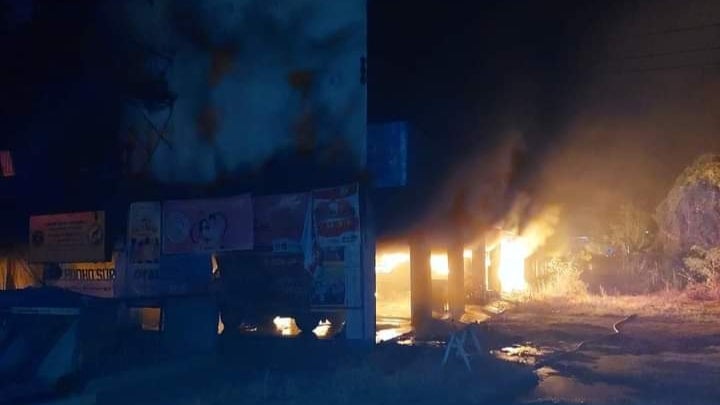 The structure after fire engulfed the building which housed the Philippine Red Cross–Pagadian City Chapter, Integrated Provincial Health Office and the Department of Health Provincial Office.

PAGADIAN CITY – A fire that broke out inside the provincial government center here shortly before midnight on Sunday destroyed supplies of COVD-19 vaccines and other routine vaccines for people in the province.

Cagampang, however, said he could not yet quantify the entire scale of the damage as the assessment was still ongoing.

The fire was believed to have started at the maintenance hall on the ground floor of one of the buildings inside the Zamboanga del Sur provincial government center in Barangay Dao here.

The maintenance hall sat directly below the IPHO office on the second floor, which also sustained damage. As the fire grew, smoke rose towards the adjacent structure where COVID-19 patients with moderate cases stayed on the third and fourth floors. At least 12 patients were temporarily evacuated to the nearby vacant wards until the fire was put out, Cagampang said.

Aside from the IPHO office, the provincial office of the Department of Health (DOH) and the Philippine Red Cross (PRC) also sustained damage.

Cagampang said they were still trying to account for all the damages inside the building while the Bureau of Fire Protection (BFP) probed about the origin of the fire.

Part of the vaccine supplies were intended for the “mobile resbakuna,” scheduled in different barangays in the province, while the rest were for the towns which did not have enough cold storage spaces to accommodate the arrival of new sets of vaccines on October 28 and 29.

Dr. Reynaldo Ortiz, chair of the PRC Pagadian chapter, said the PRC lobby sustained some damage but they were still checking if their existing laboratory equipment were still intact.

No one was hurt in the incident.