Longest bridge in PH nears completion after 4 years of construction 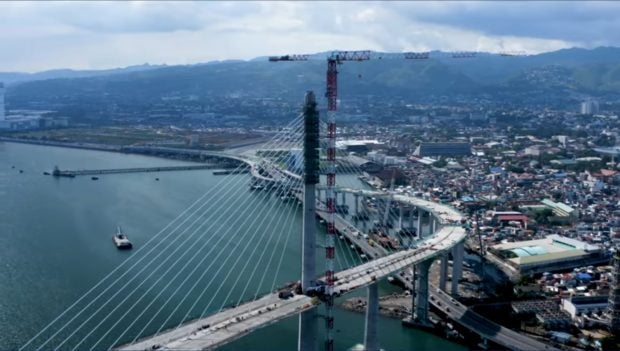 After both ends of the bridge were joined nearly four years since the construction began, top officials of the local governments and Metro Pacific Tollways Corp. (MPTC) on Friday led the main bridge deck ceremony that symbolized the connection of the two localities.

“After four years, we’re finally here. I really feel a sense of pride and relief although we still have work to do,” MPTC chair Manuel Pangilinan told reporters here on the sidelines of the ceremony.

MPTC entered into a public-private partnership with Cebu City and Cordova for the construction of the P30-billion bridge known as Cebu-Cordova Link Expressway (CCLEx). It is now 86-percent complete and is expected to be finished in the first quarter of 2022.CCLEx, the third bridge connecting the mainland to Mactan Island, will be using an all-electronic toll system to make way for faster traffic flow and seamless travel between Cebu City and Mactan, which hosts Mactan-Cebu International Airport (MCIA), Mactan Export Processing Zone (MEPZ), and some of the country’s posh resorts and hotels.

Once finished, it will become the longest bridge in the Philippines, surpassing the 5-km Candaba Viaduct at North Luzon Expressway that connects the provinces of Pampanga and Bulacan.

“[This bridge is] not just for Cebu City, not just for Cordova, but for the whole country,” said Rama in his speech.Cho hoped the third bridge will be named Sto. Niño Bridge and inaugurated on April 15, 2022, the first death anniversary of her father and the late Presidential Legislative Liaison Office Secretary Adelino Sitoy, saying it “sure will give him so much happiness in the afterlife.”

Sitoy, who died due to COVID-19, was a proponent of a bridge that would connect his hometown, which had been lagging behind the more prosperous Lapu-Lapu City, to the mainland. Mactan Island only has two localities—Lapu-Lapu and Cordova, but the former is more prosperous as it has jurisdiction over MCIA and MEPZ, and is home to most resorts on the island. It is also in Lapu-Lapu where the Mactan end of the first two bridges is located, both of which started in Mandaue City on the mainland.

“To all those people who did not believe in his (Sitoy’s) vision from the start, he would have said, ‘Hey, we did it without your help,’” Cho said.

With CCLEx, Cho believed it would finally help their municipality achieve its goal of becoming a city.