Experts: Cebu town reclamation to cause ‘irreversible’ damage to ecology 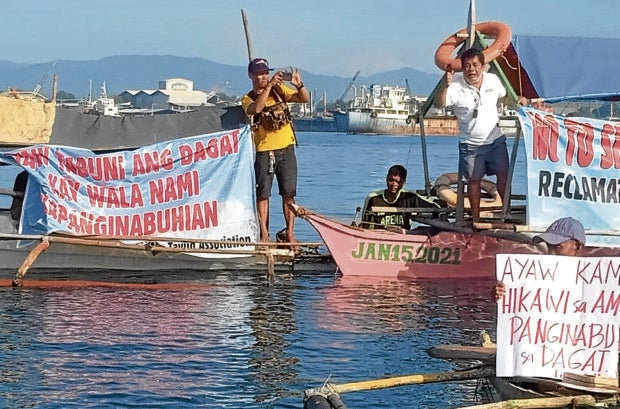 NO WAY Residents of Barangay Tayud in Consolacion, Cebu, hold a demonstration off the coast of their coastal village early in October to protest the proposed 235.8-hectare reclamation project that will displace fisherfolk and the decades-old shipyards operating in the area. —PHOTO COURTESY OF EDWARD LIGAS

CEBU CITY, Cebu, Philippines — Environmental experts here have warned of the dangers of its 235.8-hectare reclamation project in Consolacion town, Cebu, being pushed by the local officials in partnership with a private consortium.

“Should the reclamation project continue as it is, the damage to our marine biodiversity will be irreversible,” said Dr. Filipina Sotto, the project leader of the study conducted by FBS-Environment and Community Research and Development Services, a Cebu-based think tank that focuses on environmental issues.

“The loss of our natural resources will also harm the poor the most, such as the fisherfolk who rely on the sea for their income and sustenance,” she added.

Sotto said her team found 75 species of corals and seven mangrove species in the sea of Consolacion that would be destroyed should the project push through.

“For people who live near the seas, corals and mangroves are important because they form barriers that weaken the impact of sea waves. Without them, these people are more vulnerable to strong floods,” she said.

Sotto said they also found out that fisherfolk from the towns that adjoin Consolacion also fish in the town’s waters, contrary to the local government’s claims that there were no more people who fish in the proposed reclamation site, which is currently home to decades-old shipyards that service not just the country’s major commercial ships but also some of the Philippine Navy’s vessels.

The study revealed that 500 fisherfolk from Consolacion and Liloan towns as well as in the cities of Mandaue and Lapu-Lapu will lose their livelihood if the reclamation project pushes through.

Since a dump-and-fill project needs minerals from the ground, it will create another environmental problem as it will need to quarry land from the mountains, Sotto said.

“Quarrying is required to get the gravel and sand needed to complete the reclamation project. However, in the long run, the foundation of the lands in the quarrying area will get weaker. This increases the risk of landslides occurring in Consolacion during the rainy season,” she said.

Other natural resources that could be destroyed by the reclamation project include 51 species of macrobenthic invertebrates and seven species of mangroves that are nursery grounds supporting the fishery in Cansaga Bay, according to the study.

Based on the records of the Securities and Exchange Commission, LCSDC was incorporated on Oct. 31, 2019, with a capitalization of P10 million.

Its incorporators included Rep. Victor Yap of Tarlac and his brother, Jose Yap Jr., who is former mayor of San Jose town in Tarlac.

In a text message to the Inquirer, the congressman said there was no law that barred him from owning a corporation. “But if you are suggesting conflict [of interest], then I may as well divest in the company to put the issue to rest,” he said.

In his recent State of the Town Address, Consolacion Mayor Joannes Alegado, who is running as second nominee of a party list group, said he would focus his remaining eight months in office on the reclamation project despite the opposition.

At least 2,000 workers of the six affected shipyards, as well as residents of Barangay Tayud earlier appealed to President Duterte to stop the town’s reclamation project.

Sotto said Consolacion officials should instead focus on planting and not destroying mangroves.

“Mangroves protect communities from floods and storm surges. Given Consolacion is vulnerable to flooding in general, enhancing the presence of mangroves must be considered to protect the residents,” she said. INQ