Man disguises himself a doctor to care for COVID-hit grandma 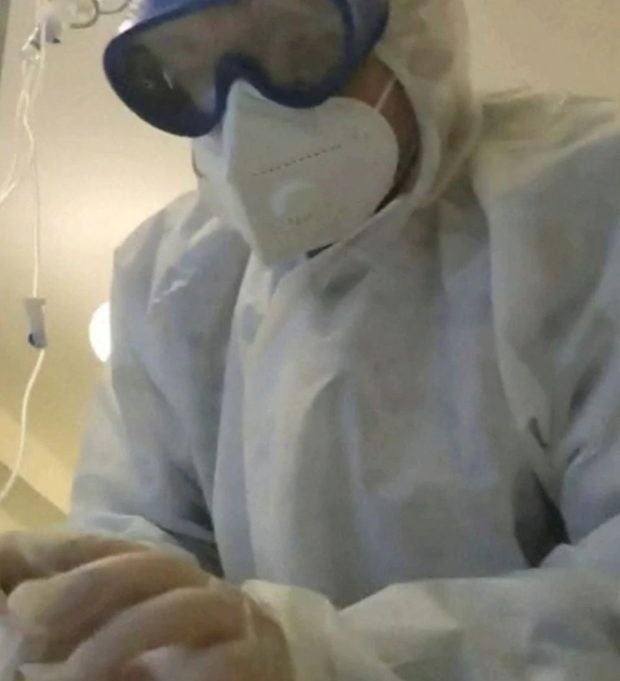 Local resident Sergei (whose last name was not given) disguised as a doctor in a protective suit takes care of his grandmother suffering from the coronavirus disease (COVID-19) in a hospital ward in Tomsk, Russia October 28, 2021, in this screengrab taken from a video. The video was taken on Oct. 28, 2021. (REUTERS TV/Courtesy of Sergei/Handout via REUTERS)

MOSCOW — Worried that hospital staff were neglecting his ailing grandmother in a Siberian COVID-19 ward, a Russian man said he sneaked in disguised as a doctor to look after her himself.

Sergei, who declined to give his surname, told Rain TV in an interview broadcast on Thursday that he donned protective clothing and walked into the hospital ward in the city of Tomsk last week where he looked after his grandmother for three days, giving her food and pills, and changing her bandages and incontinence pads.

Sergei confirmed his comments to the TV channel in a phone interview with Reuters on Friday. He also shared footage of what he said was him tending to his elderly grandmother. Reuters was unable to independently verify the footage.

Local authorities in Tomsk, around 3,000 kilometers east of Moscow, said they were investigating his complaints.

Alyona Levko, a deputy regional governor in Tomsk, said a local commission had been brought together to investigate the incident. “Now they’re in the medical unit … and an inspection is under way,” she said.

Reuters submitted a request for comment from the hospital but none was immediately available.

The Rain TV account comes as Russian hospitals grapple with a wave of coronavirus cases.

Russia on Friday reported 1,163 new COVID-19 deaths, its highest one-day toll of the pandemic, amid a surge in cases that has forced officials to reimpose partial lockdown measures.