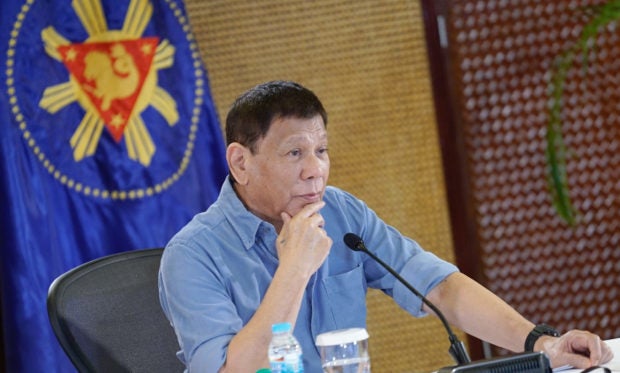 MANILA, Philippines — President Rodrigo Duterte’s net satisfaction rating dropped to 52 percent in September as he nears the end of his term, based on the latest survey of the Social Weather Stations (SWS).

The September survey showed that 67 percent of adult Filipinos are satisfied with the performance of Duterte as president, while 15 percent are dissatisfied, and 11 percent are undecided.

Compared to the June 2021 survey, gross satisfaction with Duterte’s presidency also fell by eight points from 75 percent, gross dissatisfaction rose by two points from 13 percent, and gross undecided fell by one point from 12 percent.

According to SWS, Duterte’s net rating fell to “good” in all areas except in Mindanao where it stayed “excellent.”

In the Visayas, Duterte’s net rating decreased from “very good” to “good,” falling by nine points from 53 to 44 percent.

It, however, remained “excellent” in Mindanao (from 79 to 76 percent).

The survey was conducted from September 12 to 16 using face-to-face interviews of 1,200 Filipinos aged 18 and above across Metro Manila, Balance Luzon, Visayas, and Mindanao.

In a statement, Malacañang thanked the public for giving Duterte a “very good” net satisfaction rating.

“We thank our people for giving the President a consistent “very good” rating, as reflected in the First (May 2021), Second (Jun 2021) and Third (Sept 2021) Quarter 2021 surveys of SWS. Indeed, this is a clear validation that public confidence remains high on the ability and competence of the Chief Executive to lead the nation amid the current health crisis brought by the COVID-19 pandemic,” said presidential spokesperson Harry Roque.

“With our people united behind the President and the Administration, PRRD, along with the members of his Cabinet, will continue to improve the lives of Filipinos that will be felt beyond 2022, especially as we build back a better, post-COVID-19 economy,” he added.

Duterte earlier said he will retire from politics, shelving his plans to run for vice president in the 2022 elections.