Russia signals not ready to let Afghanistan’s Taliban into UN 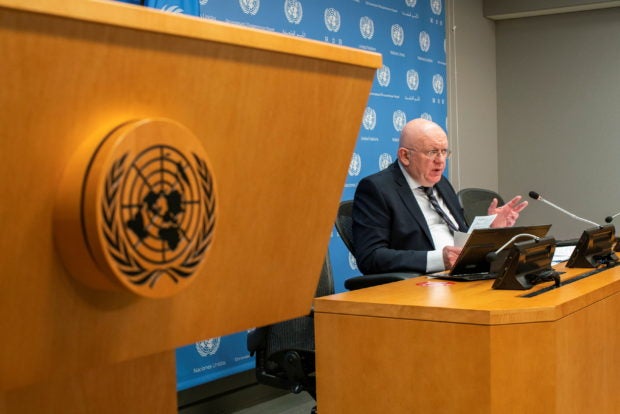 UNITED NATIONS — No one is in a hurry to recognize the Taliban as Afghanistan’s government, Russian U.N. Ambassador Vassily Nebenzia said on Friday, signaling that Moscow is not ready to allow the Islamists to represent Afghanistan at the United Nations.

He also said the United Nations and unilateral sanctions on Taliban leaders would have to be addressed but “perhaps not right away.”

“The question of recognition will arise when the international community makes sure that the promises and commitments that the authorities announced will be delivered,” Nebenzia told reporters.

He was referring to Taliban pledges – made since the group ousted the Western-backed government in mid-August – that included upholding human rights, particularly those of women and girls, and combating terrorism and drugs.

The United Nations is considering rival claims on who should represent Afghanistan. The Taliban nominated their Doha-based spokesman Suhail Shaheen as U.N. ambassador, while Ghulam Isaczai – the U.N. envoy representing the government ousted by the Taliban – is seeking to remain in the country’s seat.

A nine-member U.N. credentials committee, which includes Russia, China, and the United States, is due to consider the rival Afghan claims next month and a

decision will likely be made before the end of the year.

“The primary thing today is to stabilize the country,” said Nebezia. “The economy is on the verge of collapse with the lack of any resources, which are frozen and are not being released anytime soon, judging by the statements that we hear.”

Afghanistan parked billions of dollars in assets overseas with the U.S. Federal Reserve and other central banks in Europe, but that money has been frozen since the Taliban came to power.

Shaheen posted on Twitter on Friday: “We call on the International Community to support Afghanistan with unfreezing nearly $10 billion assets of the Afghan people and resuming the development aid and projects pledged to Afghanistan.”

Even the United Nations cannot get enough cash into Afghanistan to deliver aid to millions of people on the brink of starvation and is struggling to develop options to help stabilize the collapsing economy, U.N. officials have said.

“To carry cash by the planes … perhaps is not the best solution,” Nebenzia said.