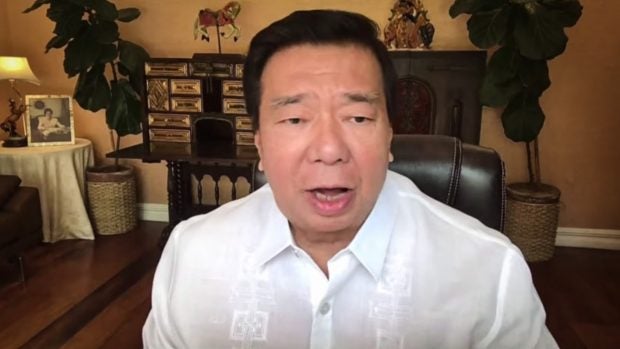 Senate Minority Leader Franklin Drilon, during Thursday’s virtual hearing of the Blue Ribbon Committee, October 28, 2021 on the budget utilization of the Department of Health (DOH) on COVID-19-related programs. (Screengrab/Senate PRIB)

MANILA, Philippines — The Senate blue ribbon committee has granted the motion of Senate Minority Leader Franklin Drilon, to publicize the income tax return of individuals and companies involved in the anomalies concerning the Pharmally Pharmaceutical Corp.

During the committee’s hearing on Thursday, Drilon moved to release the income tax return (ITR) documents given to the Senate through an executive session, by way of the approval of the committee.

Senate rules state that documents and testimonies provided in an executive session cannot be released publicly unless the committee agrees to do so.

“It is in this context Mr. Chair that I move that the income tax returns which were provided by the BIR to the committee — which under the law should be given in an executive session — should be made public because of what we have learned so far,” Drilon said.

“Under our rules of procedure governing inquiries in aid of legislation, it provides that testimony taken or material presented in executive session shall not be made public in rule and part unless authorized by the committee,” he added.

According to Drilon, he was compelled to move for the publication of the ITRs after learning that several individuals and companies linked to Pharmally — from former presidential economic adviser Michael Yang who helped finance the company, and Greentrends Trading International Inc. and Xuzhou Construction Machinery Group, did not file any ITRs for several years.

He said that it also stemmed from Xuzhou’s admission in the past hearing that they have not paid any taxes.

“I discussed with the chairman, for the record, before the hearing, and this is our desire for the government to look into the taxes paid by these suppliers. And this is prompted Mr. Chairman by the revelation done by Xuzhou Construction Machinery,” Drilon said.

In the same motion, Drilon said that the public should not forget that the root of the hearings was the Commission on Audit’s move to flag the Department of Health (DOH) transfer of its P42 billion funds to the Procurement Service of the Department of Budget and Management (PS-DBM).

Part of the funds, around P8.7 billion, were contracts given to Pharmally.

Drilon said that the government should ascertain if all the companies who got their share in the P42 billion worth of contracts fulfilled their tax obligations.

“It is in this context Mr. Chairman, with the permission of my colleagues, that I would ask that we look into the tax liabilities of these contractors. To put it in context: we should not forget that P42 billion was transferred by the Department of Health to PS-DBM which was flagged by the COA,” Drilon said.

The Senator said that this is important as President Rodrigo Duterte has insisted several times that the government is short of funds in its COVID-19 response. Proper tax collection, Drilon believes, would have provided the country with additional funding.

He said that around P7.5 billion worth of taxes should have been generated after the PS-DBM deals.

In the same hearing, Drilon later showed that Yang, former PS-DBM head Lloyd Christopher Lao, and the companies mentioned have not filed their ITRs for several years.

Pharmally remains at the center of the Senate’s investigation on the deficiencies in the DOH’s COVID-19 funds amounting to P67.32 billion.

The committee is trying to identify why Pharmally, despite having a small paid-up capital of only P625,000, got a huge share of the contracts.

There are also accusations that Pharmally’s equipment was overpriced, like in the case of face masks sold at over P27 per piece in April 2020, when other companies offered a price of P13 per piece.