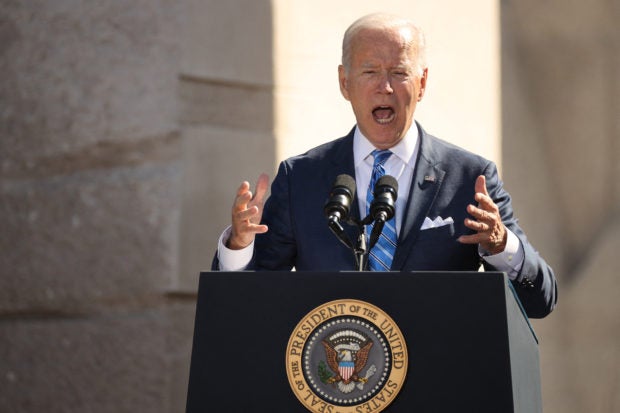 BANDAR SERI BEGAWAN, Brunei — US President Joe Biden on Wednesday criticized Beijing’s “coercive” actions across the Taiwan Strait in an address to a summit of Asia-Pacific nations also attended by China’s premier.

Tensions have soared as Beijing steps up air incursions near Taiwan, a self-ruled democracy that China considers to be a province awaiting reunification, by force if necessary.

Speaking via video link to the summit, Biden said the United States was “deeply concerned by China’s coercive and proactive actions… across the Taiwan Strait” which separates the island from mainland China.

Such actions “threaten regional peace and stability,” he said, according to a recording of his remarks obtained by AFP.

Biden was speaking at the East Asia Summit, which brings together 18 Asia-Pacific nations — although the leaders met virtually this year due to the coronavirus pandemic.

Chinese Premier Li Keqiang was attending, along with Russian President Vladimir Putin and leaders of South Korea and Japan.

The US president’s comments come at a time of high tensions between Washington and Beijing over Taiwan, with Biden pressing ahead with rigid policies against China that appear broadly in line with those of his predecessor Donald Trump.

Biden last week told a televised forum the United States was ready to defend the island from any Chinese invasion, remarks that were quickly walked back by the White House amid warnings from China.

And on Tuesday, Secretary of State Antony Blinken urged greater inclusion of Taiwan in UN institutions –- prompting China to insist the island had no right to join the world body.

The United States switched recognition in 1979 to Beijing, but Congress at the same time approved the Taiwan Relations Act that obligated the supply of weapons to the island for its self-defense.

Washington has been deliberately ambiguous on whether it would intervene militarily if China attacked.

Biden also took aim at China’s maritime claims during Wednesday’s summit, saying the US was “fully committed to the freedom of the seas, open waterways, and unimpeded flow of commerce, including in the South China Sea”.

Beijing has overlapping claims in the flashpoint sea with several Southeast Asian states.

He also said the US will “speak out for human rights in Xinjiang and in Tibet, and the rights of the people of Hong Kong”.

The summit was organized by the Association of Southeast Asian Nations (ASEAN), and capped three days of annual meetings hosted by the 10-member bloc.

The focus has been Myanmar, which has been in crisis since a military takeover in February.

At Wednesday’s summit, Biden said the United States “stands with the people of Myanmar and calls for the military regime to end the violence, release all political prisoners and return to the path of democracy”.