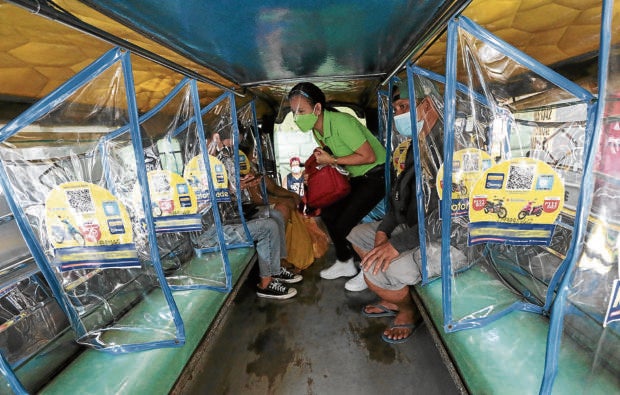 ‘NO SIGNIFICANT CORRELATION’ The Department of Transportation has proposed to allow public transportation vehicles to carry 100 percent of their capacities, saying scientific studies have found “no significant correlation” between the number of passengers and infections, meaning more passengers did not necessarily lead to more infections.—NIÑO JESUS ORBETA

MANILA, Philippines — A major transport group said on Tuesday it would withdraw its petition for a P3 fare hike after the government announced that it would provide P1 billion in subsidy to registered public utility drivers to help them cope with successive oil price increases.

Orlando Marquez, president of the 30,000-strong Liga ng Transportasyon at Operators ng Pilipinas (LTOP), said during the government’s Laging Handa briefing that his group was recommending that cash cards containing the subsidy be given “directly to the driver.”

He said that by passing on the subsidy through the operator “the fuel might not go to the jeep and might instead go to the Pajero of the jeepney owner.”

Although LTOP would be dropping its fare hike petition, Marquez said his group would like the minimum fare be brought back to P10 from P9 because the P1 change for those who pay with P10 had become a source of friction between passengers and drivers.

But the Department of Transportation (DOTr) is against any fare hike because fuel price increases should not be shouldered by commuters, Assistant Transportation Secretary Steven Pastor told senators during a budget hearing on Monday.

Marquez said his group supported a proposal by Transportation Secretary Arthur Tugade to increase the passenger capacity of public utility vehicles to 100 percent, but with measures to prevent coronavirus transmission.

In a statement on Tuesday, the DOTr said its proposal was based on economic and medical considerations.

It said that reopening more businesses, especially in Metro Manila which is now under alert level 3, had resulted in greater demand for public transport.

Scientific studies in Vietnam and China, and a report by the British Medical Journal, showed that “public transport capacity has no significant correlation with the number of COVID-19 cases,” it said.

“Metro Manila is the ideal place to test the proposal considering that 81.4 percent of its population is now fully vaccinated against COVID-19. In addition, public utility jeepneys and buses operating in Metro Manila are well-ventilated,” the DOTr argued.

It said that increasing passenger capacity would lead to “a higher revenue for the public transport sector … considering the increase in expenses brought by increasing fuel prices.”

Modesto Floranda, chair of Pagkakaisa ng mga Samahan ng Tsuper at Operator Nationwide (Piston), a transport group claiming 100,000 members nationwide, said they also supported this proposal as a way to compensate for the P18 net increase in fuel prices since the start of the year.

In addition, he said all public utility vehicles should now be allowed to resume operations after so many were kept off the streets since last year.

But Floranda told the Inquirer that Piston wanted “long-term solutions” to oil price increases and suggested the repeal of the oil deregulation law and suspension of the excise on petroleum products.

In a statement on Tuesday, Piston called for the urgent suspension of 12-percent VAT and excise on oil, following the nine-week increase in fuel prices.

At the House of Representatives, Deputy Minority Leader Carlos Isagani Zarate urged his colleagues to work for the speedy passage of House Bill No. 243 to repeal the excise on oil products.

Bayan Muna chair Neri Colmenares urged the government to use the P120 billion in unspent pandemic response funds to alleviate the plight of consumers reeling from the impact of the oil price hikes.

Malacañang on Tuesday said President Duterte welcomed the decision announced on Monday by the Development Budget Coordination Committee to provide the cash grant to the public transportation sector.

“We are confident that the P1-billion fuel subsidy would be distributed in the remaining months of the year under the Pantawid Pasada Program of the Land Transportation Franchising and Regulatory Board (LTFRB), the Department of Transportation,” said presidential spokesperson Harry Roque.

The LTFRB has not acted on LTOP’s fare hike petition which it filed two weeks ago.

It was set to meet on Tuesday with the Land Bank of the Philippines, which would distribute the subsidy through cash cards for drivers, Roque said.

The government first launched Pantawid Pasada in July 2018 to cushion the impact of price increases following higher excise on fuel resulting from the Tax Reform for Acceleration and Inclusion Act.

The program covered about 180,000 jeepney drivers with franchises. Each beneficiary received P5,000 in 2018 and P20,500 in 2019 through a debit card that they used to pay for fuel purchases at select gas stations.