Parents still unsure about sending kids back to schools 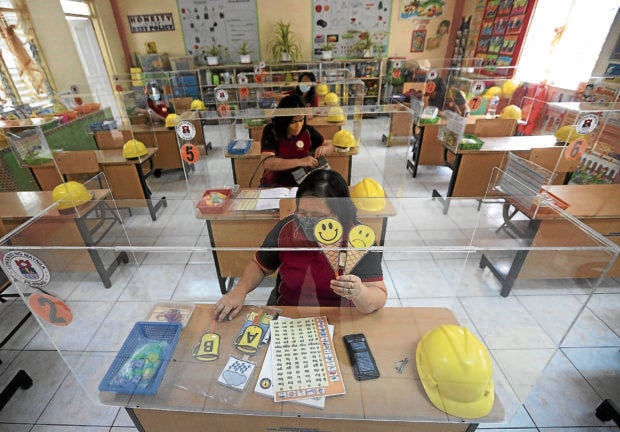 LET’S FACE IT Ensconced at desks that are far apart and customized with plastic dividers, teachers at Aurora Quezon Elementary School in Manila appear ready for face-to-face classes that, however, will be piloted in 30 schools, instead of 59, outside Metro Manila on Nov. 15. —MARIANNE BERMUDEZ (file)

MANILA, Philippines — As the Department of Education (DepEd) prepares for pilot-testing in-person classes, some parents are still uncertain about allowing their children to return to their schools with the COVID-19 continuing to be a threat.

The DepEd said strict measures are in place for the pilot classes scheduled to start on Nov. 15.“We reiterate that stringent preparations and protocols have been established to provide maximum protection for our learners and other…stakeholders in this critical undertaking,” the department said in a statement on Tuesday.

But it added that participation in these classes “will be voluntary.”

“Parents must provide written consent allowing their children to join. No parent shall be forced to send their children in this modality since the schools will still hold distance learning classes,” the DepEd said.

But Aireen Macalalad, a single mother of two children in grade school, said she would not let them take part in the pilot classes.

“My children are not yet vaccinated and my son even has skin rashes, so I do not want him to get inoculated. Probably when the pandemic is over, that’s when I will approve of the face-to-face classes,” she told the Inquirer.

Ethel Sarmiento of Quezon City, whose children were studying in Pasig City before the pandemic, also said she would rather not risk sending them back to school because she found the number of COVID-19 cases in Metro Manila still quite high.

According to the latest figures by the Department of Health (DOH), there have been 12,932 new cases in the capital region in the last 14 days.

Sarmiento has a daughter who is in Grade 6 and a son in kindergarten.

“We as adults are already trying to keep safe and be careful, so how can we know for sure that the children are also safe from the virus?” she said

“It’s difficult for me, considering that I know I do not have the financial [capacity] in case my children get sick,” she added.

Meanwhile, her children are coping with the difficulties of distance learning, Sarmiento said. Besides having poor internet, they take turns with their one mobile phone.

But Jenny Arabos, a resident of Mangaldan, Pangasinan province, is in favor of the children returning to school.

She said there has been no COVID-19 case in her barangay since September.

Apart from her four children, Arabos also helps the three children of her brothers in their studies. Six of them are in grade school while one is in high school.

“I’m teaching seven children… and I can’t focus on every one of them. As a result, they do not learn properly,” she said.

Jerome Cambay, a resident of Quezon City, said: “If I were to decide, I would approve of the face-to-face classes because my children are having a hard time keeping up with online classes.”

Cambay has three children. The eldest, a son, is in his third year in college and the youngest, a daughter, is in Grade 7. His other son is in Grade 10.

The three have their own mobile phones and also share a tablet provided by the city government.

Most of these schools are in the Visayas and Mindanao where there are low numbers of COVID-19 cases, according to an updated list from the DepEd.

It said 93.2 percent of the teachers and other workers in these schools have been vaccinated.