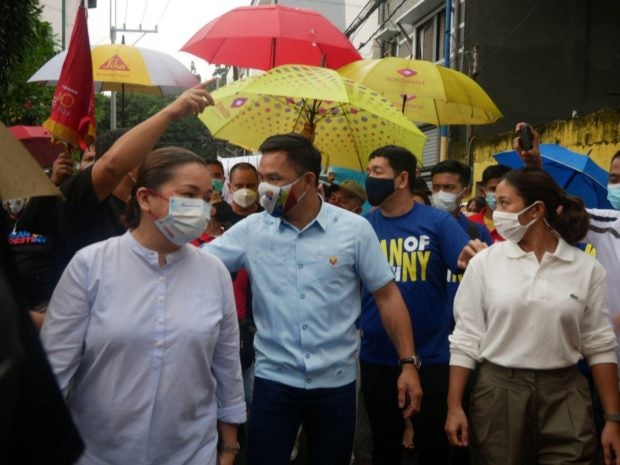 Presidential candidate Manny Pacquiao shoots back at critics accusing him of vote-buying.

MANILA, Philippines— Presidential candidate Manny Pacquiao said critics calling him out for alleged vote-buying — since he has publicly provided financial assistance to Filipinos he has encountered during his recent travels — are only envious of his activities.

Pacquiao, who traveled to Benguet and other provinces in northern Luzon affected by recent cyclones, speculated that in their (critics) attempts to appeal to voters, they accuse him of vote-buying every election season. He claimed that he has been handing out money to people in need since 2002.

He also said that he would not stop unless he would be prohibited to do so.

(So long as it is not forbidden, I will continue to do so.  Perhaps they are just jealous because they know they can’t do what I am doing willingly.  Maybe they could do that during elections, but without the elections they won’t do that.)

He said that the money he gives to people comes from his own pocket — earnings gained from his businesses and illustrious boxing career.

(Instead of giving money, they would even steal money from the government. That’s how most politicians do, but I worked hard for this money, I am proud of it, and I am happy that I can help Filipinos, which is good enough for me.)

(Some will give away stolen funds from the public coffers, so even if people are pleased with what you did, it won’t be credited to you since you stole money.)

Since announcing his candidacy for president, Pacquiao has been seen several times handing out money. During his trip to Batangas, the senator was seen giving P1,000 bills to people.

He has been accused of vote-buying and disregarding health protocols, as his trips attracted large crowds, which go against precautionary measures against COVID-19.

Last October 19, Pacquiao’s legal counsel Nikki de Vega said he did not violate anything as the crowds swarmed him upon learning that he was in Batangas.  She also defended Pacquiao from vote-buying claims, echoing the senator’s statements that he has been doing it for a long time.

In the briefing, Pacquiao said his critics should have pointed out his charitable activities a long time ago when he started these in 2002.

(You know I have been giving financial assistance to people, especially cash grants, since 2002 […] no one called me out for that and until now we have been doing that.  But then somebody would take notice now.  You should have criticized me as early as 2002 when I was not a politician yet.)

(The only reason I entered politics is that I did not know that the problem was so grave. I sympathize with our fellow Filipinos. That’s why I want to help all of them, but I cannot do that because my resources are limited.)